The Centre Of Attention

The architects – Smithgroup, have created a premier resort destination for the owner, M.M. Makronisos Marina Ltd. 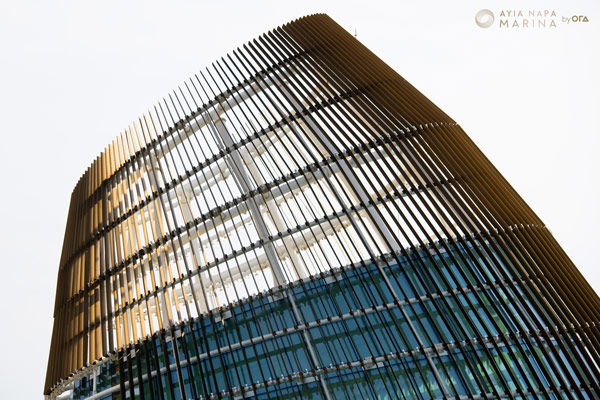 At the heart of the 98 acre resort, built on its own jetty, completely immersed in the marina environment, lies the focus of attention; the Event Centre.

This elliptical and organically conical glass and metal building is a destination venue and one-of-a-kind architectural marvel in Cyprus, designed for spacious open-air or indoor events. Its eye-catching exterior vertical sunshades create a layered and visually elaborate experience during the day and are transformed into a glowing icon at night.

Cypriot lighting designers Archtube conceived of a dynamic RGBW lighting plot that bring the Event Centre to life, creating scenes and evoking different moods and reactions depending on the use of the Event Centre on a given occasion.

Fully equipped with the latest technology, this unique ultra-modern building and the Plaza leading up to it provide an ideal setting for parties, weddings, corporate events, concerts and other functions, with a guest capacity ranging from 150 to 500 depending on the nature of the event.

The Event Centre is wrapped by a veil of vertical sun shade fins in 5 levels, each inclined progressively and slightly differently. There are 148 fins on each level. The lighting design intention was to illuminate a pair of fins by placing a single light fixture between them at the base of each level; requiring 740 light fixtures in total.

The fins have an elliptical profile and vary in length between 8.7 and 2.2 metres in height. Individual control of each fixture was required. The intention was to create dynamic lighting programs based on content. The illumination of the fins was to be as homogeneous as possible and light trespass to be reduced as much as the up-lighting concept would allow. A suite of different lighting programs was to be provided in such a way that the client could easily manually select a particular program to suit a specific event, or as a default, an automatic schedule would run the day to day lighting displays. Remote control was required so that illumination Physics could provide support via a broadband connection for maintenance or the uploading of new lighting scenes. 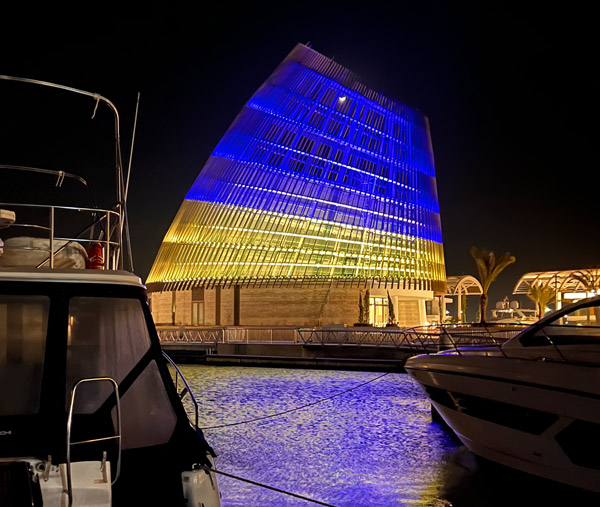 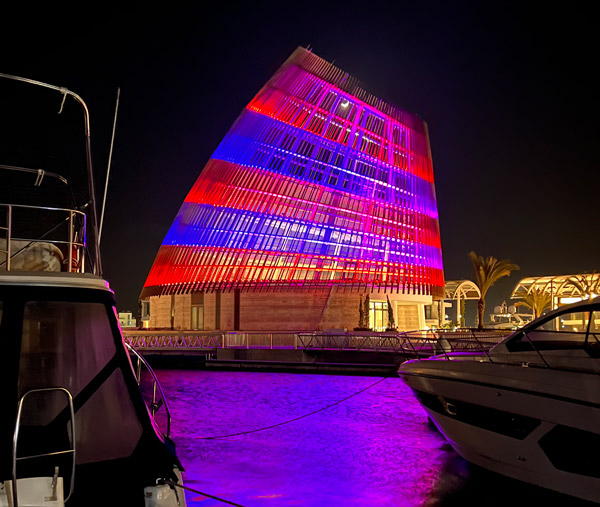 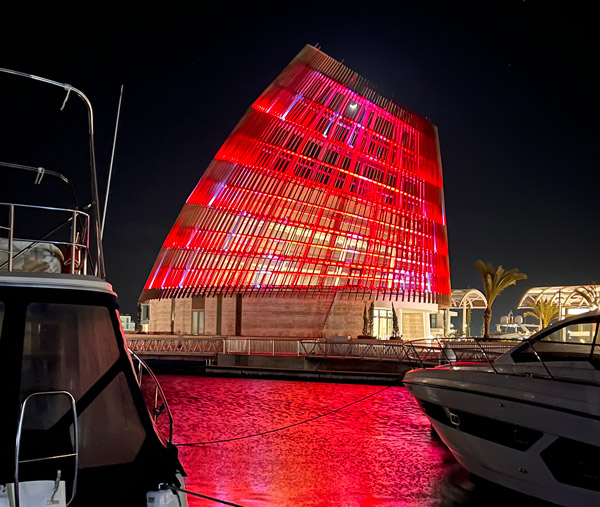 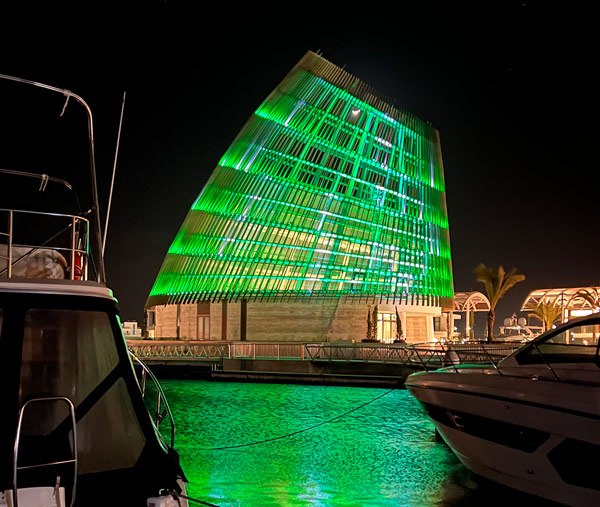 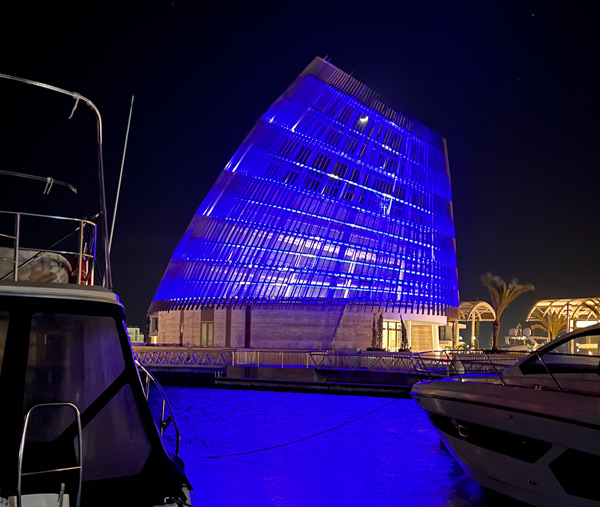 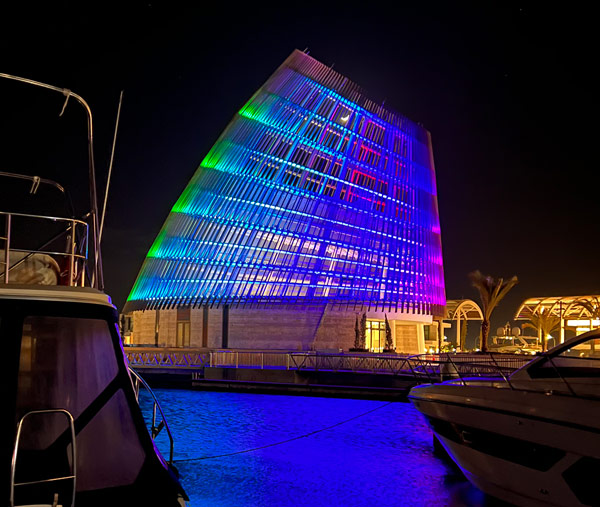 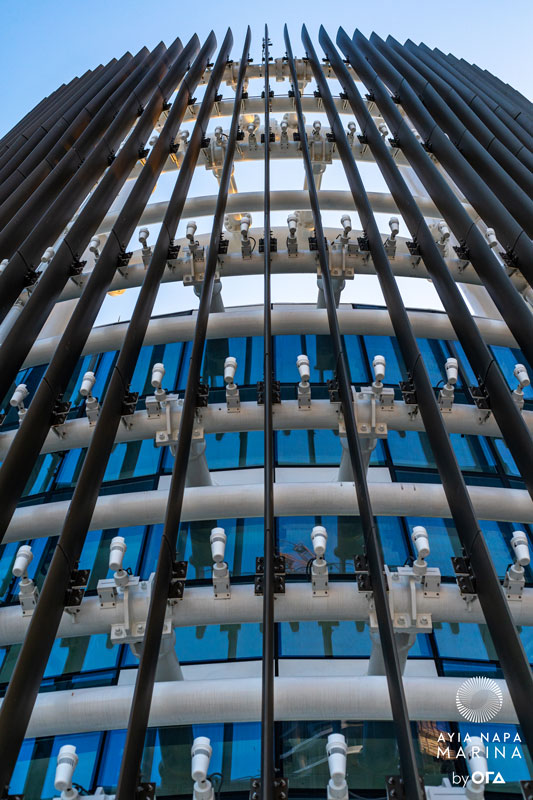 Exactly how this would be done involved many calculations and evaluations. Much work was done in Dialux modelling but the best way to test and evaluate the candidate prototype luminaires was to build a 1:1 scale mock-up in our Hong Kong office where we have access to expert model makers and theatrical set builders. Two fins were fabricated to match the precise dimensions and profiles of the proposed architectural design for the Event Centre fins and finished in the closest matched RAL colour we could create. Effectively we had created a part of one of the five layers of fins.

Numerous Luminaires were modeled and tested but the design of the light fixture settled on a customised version of the smallest of the Illumination Physics Circular Wash Light series. This had many advantages.

The luminaire could be aimed in pan and tilt, which was essential since it would always need fine adjustment to be perfectly vertical in pan, and the tilt was different for every fin. The existing housing was compact and attractive having been designed to run up to 25 watts (we would need less power than that). The fixture was also AC powered connected by a combined AC/DMX cable greatly simplifying the wiring. The fixture was then adapted to have both in and out cables so the installation could be streamlined by connecting the fixtures in series and only four circuits would be required on each of the five levels. The in and out cables were customised to the perfect length and fitted with push to snap connectors to make installation as easy as possible.

The base of the fixture was extended so that when it was installed the centre of the light fixture would be aligned close to the centre of fins. The fins are supported by circular ring beams top and bottom and the distance varies. A custom bracket would be required to mount the light fixtures onto the beam. The bracket was designed to be adjustable in the horizontal and vertical axis and also allow rotation of the fixture. This was crucial because, as our mock-ups demonstrated, any slight misalignment produced obvious visible illuminated results.

Of the 740 light fixture locations, 500 of them were typical. However in the other 240 locations, other special types of brackets were required due to clashes with other structures on the ring beams such as flanges and supporting brackets. All of the brackets and light fixtures were fabricated from marine grade aluminium and 316 stainless steel. The marine grade finishes were customised to meet the same RAL colour of the Event Centre structure.

The choice of LED and the accompanying optics was the next challenge. Ten watts from a single 4-in-1 RGBW LED was sufficient in terms of power provided that it was lensed correctly. A custom lens based on an asymmetrical format was developed. To contain the light within the structure, the axis within the façade was limited to 10 degrees. The axis between the fins was set at 60 degrees so that the light from the luminaires would meet the fins at the lowest point. In the centre of the lens, a linear baffle was printed on to the lens to limit the escape of light that could otherwise pass between the top of each pair of fins. In this way unhelpful light trespass was eliminated. Our 1:1 mock-up was a crucial tool in modelling the design.

The last step in the development was an anti-glare baffle that was designed around the asymmetrical beam shape, allowing each axis to function but with the closest glare reduction possible. 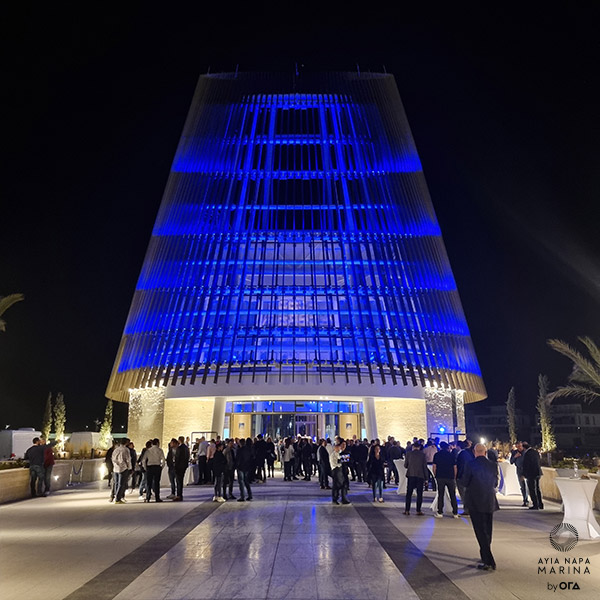 The Event Centre was built during the height of COVID 19. Normal regular site visits were not possible. This meant that our step-by-step installation documentation had to be very precise. Our instructions set out in 3D drawings and annotations, exactly how to install, adjust and aim the light fixtures so that there could be no doubt. Great teamwork with the client and their local contractor resulted in a smooth installation of the hardware. 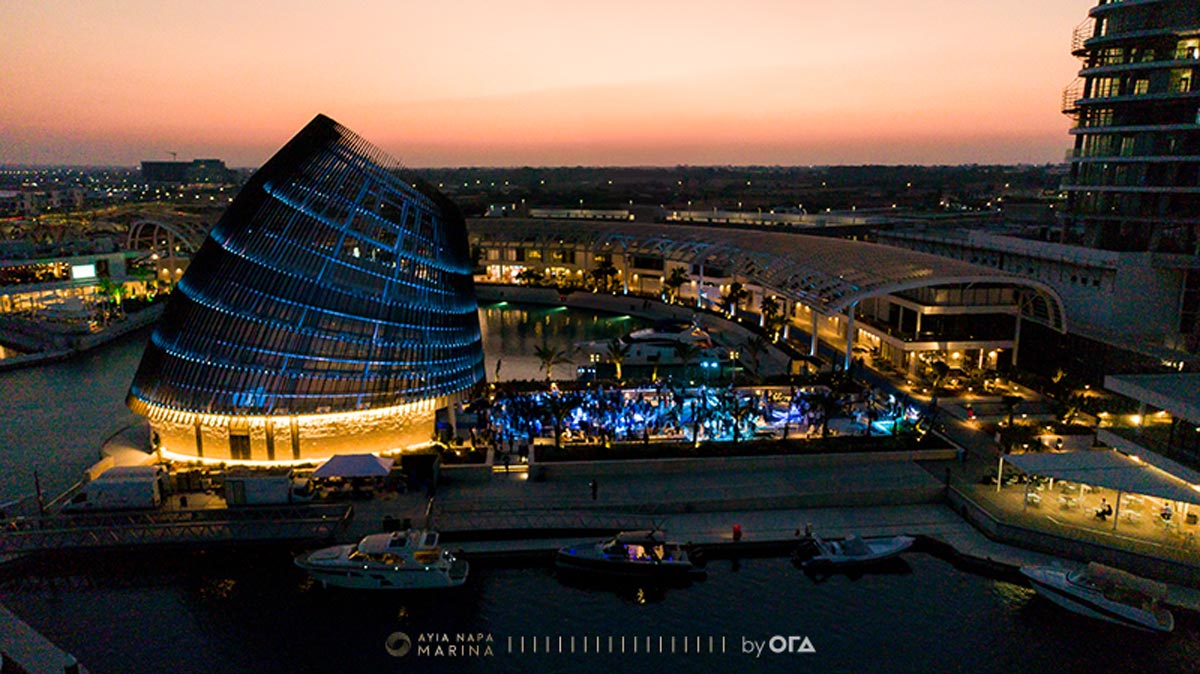 Illumination Physics was responsible for design of the Artnet/DMX network and electrical wiring and provided detailed schematics for the electrical installer to follow during installation.

The components of the control system were configured and loaded into a 19 inch rack and preprogramed in Australia prior to arrival on-site for reasons of efficiency.

The system is made up of a custom server for the Madrix control system, running Madrix 5 lighting control software. Plus, Madrix Artnet to DMX converters and the necessary data network switches.

The system uses the inbuilt scheduler for automatic operation. In addition we constructed a custom graphic user interface for the system that allows the client to manually override the scheduler to select any of the pre-programmed sequences via the touch screen, for particular days or events.

The PC also has ‘Team Viewer’ installed so that illumination Physics can provide remote support, diagnostics and programming as well as maintenance. This was done in conjunction with the clients IT department, ensuring that we did not compromise their network.

The original intention was for illumination Physics to send a pair of technicians from Australia for the final commissioning and programming of the system on site, however Covid prevented this, so we sent our European manager Mr Martin Opolka from Germany and an experienced Madrix programmer from the UK to conduct this work in conjunction with illumination Physics Technology and Programming Specialist Mr Rohan Thornton via remote control in Australia.

Our people checked all of the installation work that had been completed by the installers and then commenced the commissioning and final programming onsite. 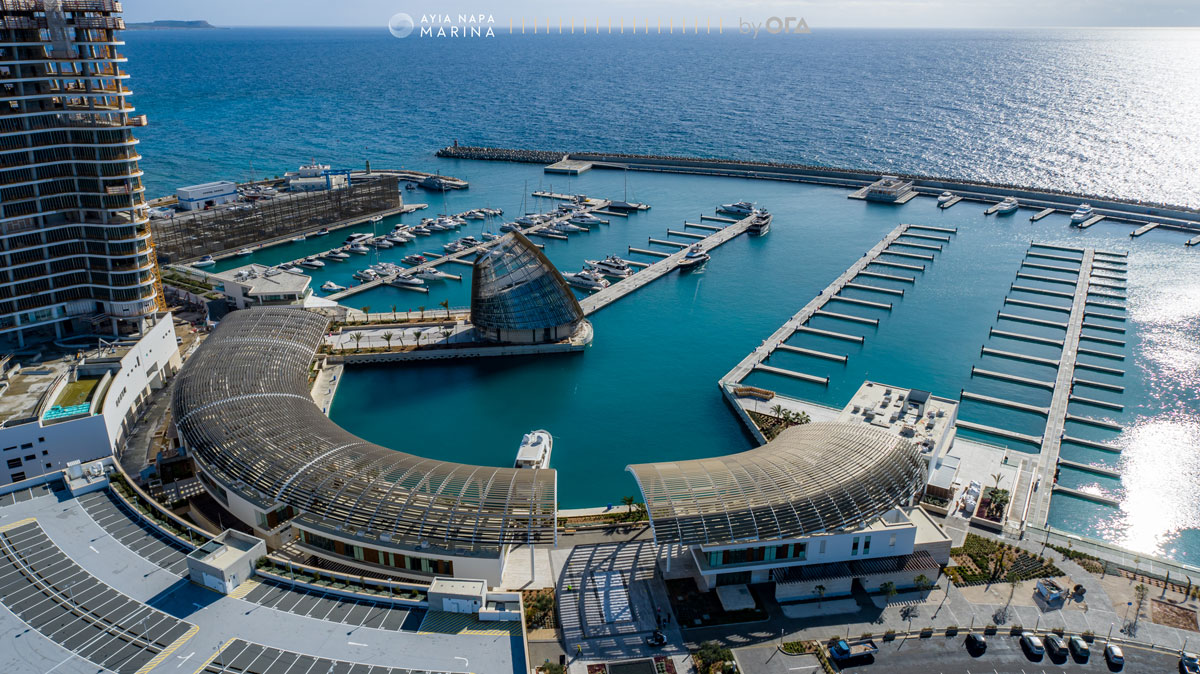 Great architecture deserves to be celebrated at night, but the lighting of The Ayia Napa Marina Event Centre does more than that. It can convey emotion and mood, a sense of purpose – simply it commands to be the centre of attention. 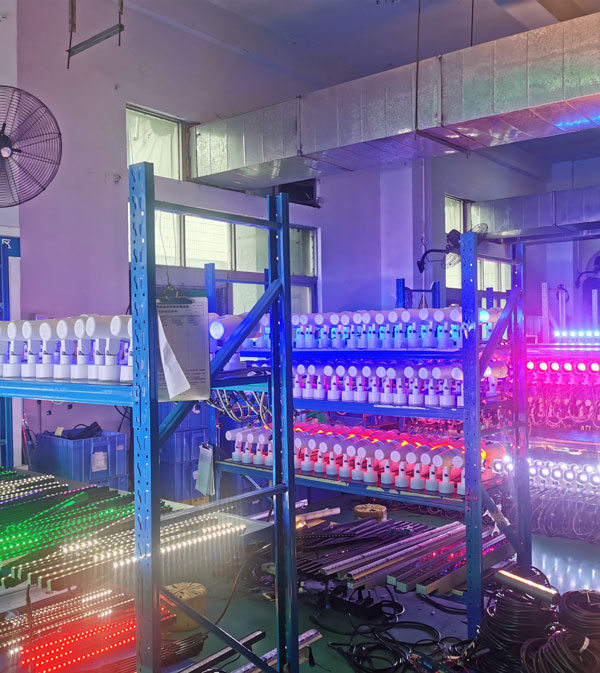 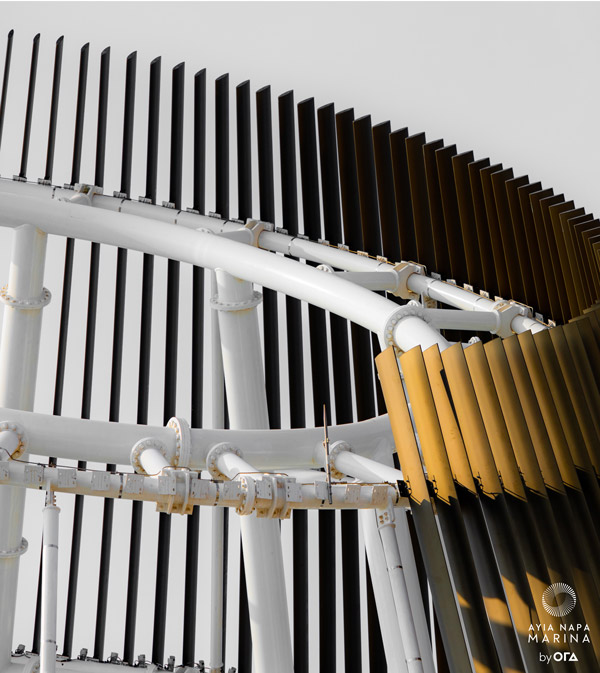 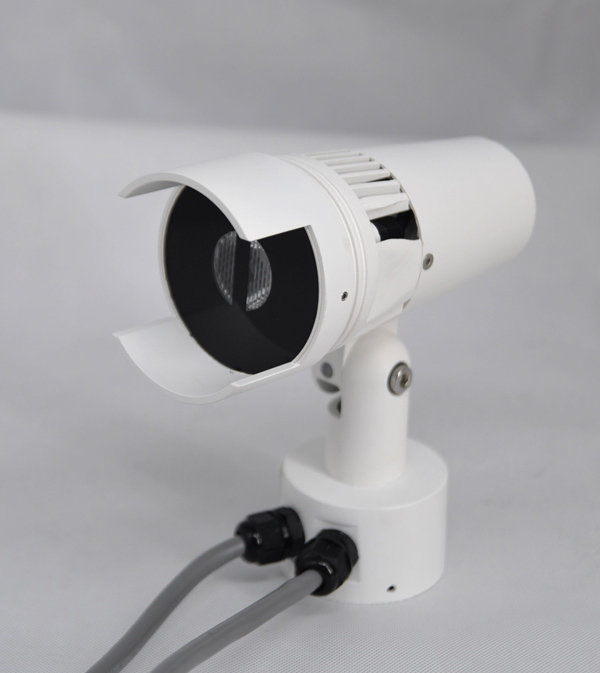 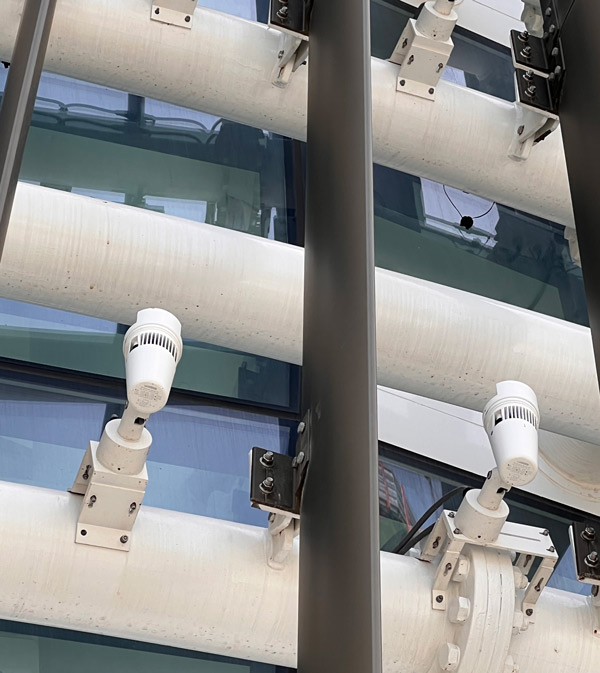 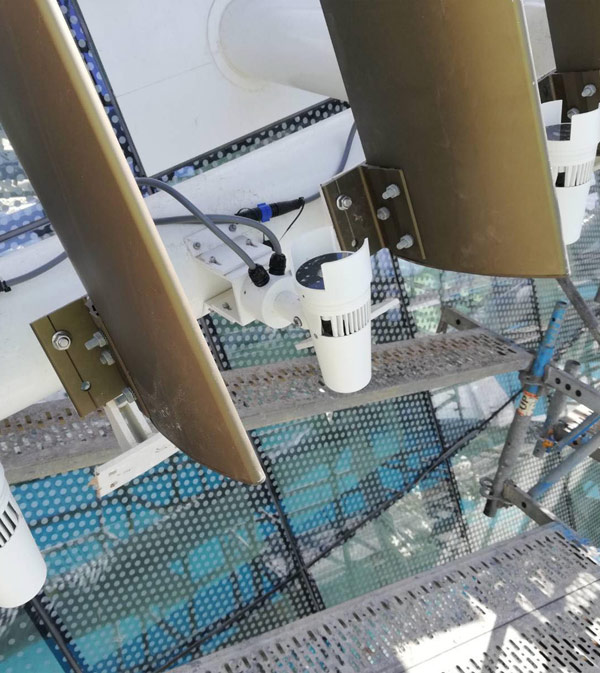