The Double Tree by Hilton

illumination Physics were in the process of completing the façade lighting for another integrated façade lighting project in Croatia when asked by the client if we could look at another of his projects currently under construction. Satisfied with our work, he asked us to consider what we could achieve with our unique lighting schemes and products on a 20-storey tower under construction. The main brief was to offer lighting suggestions that were innovative and could light up the façade to make it ‘stand out in a sophisticated way’ and highlight it as if it were a five star hotel. This client is spontaneous; with the façade already confirmed, there is little time for consultancy and decision-making.
illumination Physics were given free rein so to speak, but there were consequences. Any delays or complications in the project could give rise to expensive claims for subsequent variations, which would involve all other trades. Although it is common for lighting to be considered at the tale-end of a project, or even as an afterthought, this request was certainly received later than what is ideally expected on any given project.
The drawings and renderings were produced and we viewed the building for the first time. Site progress photos informed us that the concrete pours were nearly complete, meaning the façade panel installations were imminent. There was no time to make any changes to the curtain wall.
For the most part, the building is conventional – a standard hotel layout  consisting of lift cores and services in the centre of the floor plan, surrounded by a rectangular guest access corridor with guest rooms forming a continuous periphery around the vision glass panels, providing all with a view. There is nothing new in this logical and typical hotel design. 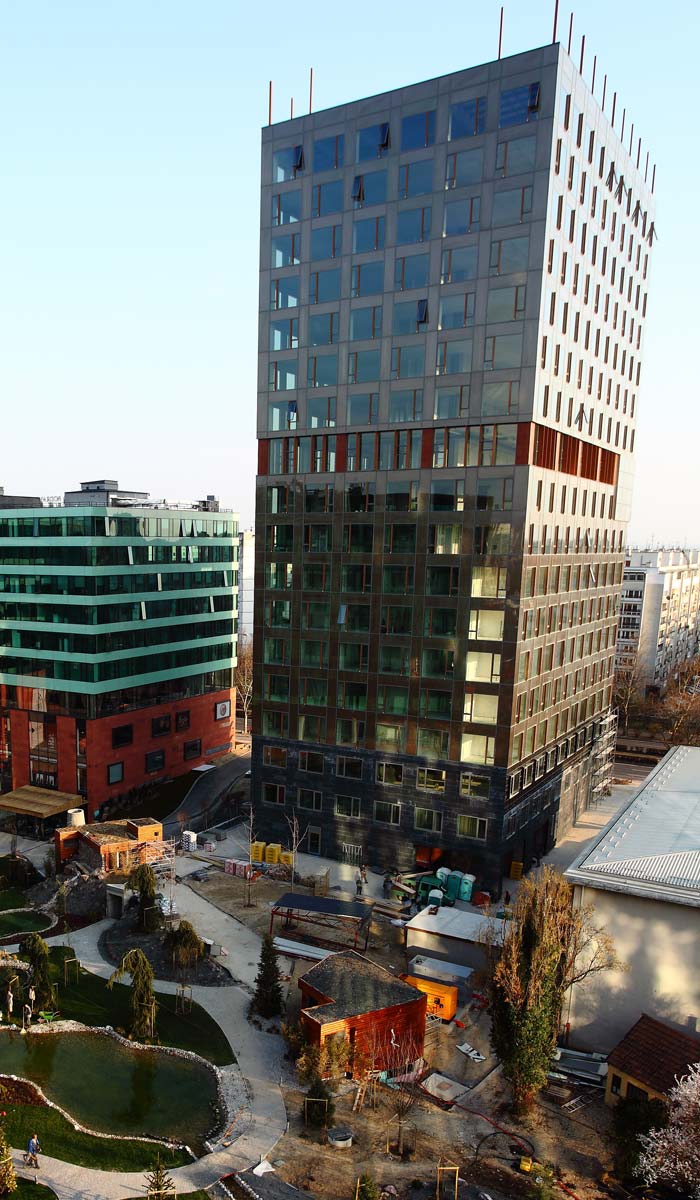 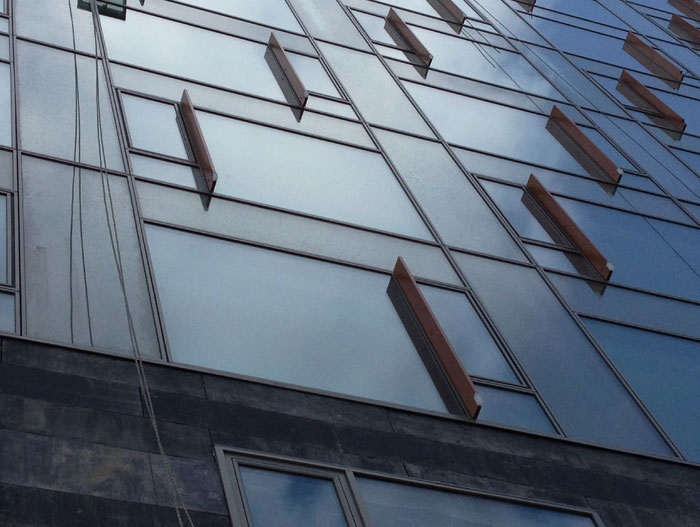 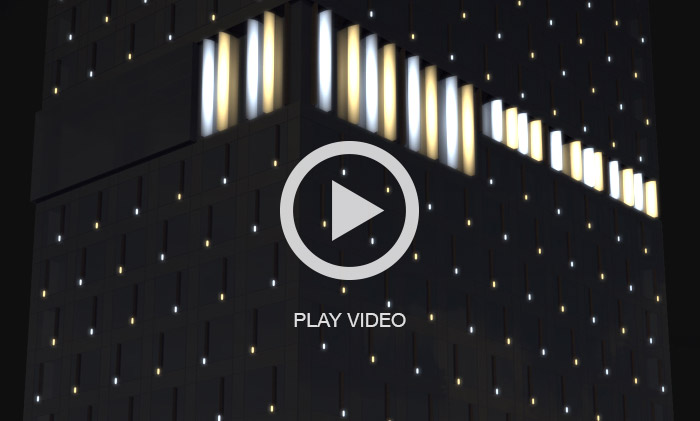 Decades-long experience of integrated façade lighting helped map the course of our solution. The architect had already decided to make the unique laminated wooded fins the eye-catching feature of the façade.
Following his lead, the key to the new façade lighting would be to celebrate these unusual fins.
Lighting them indirectly was not practical and the chances of consistently grazing them were slim. Indirect light would also break golden rule number one – we would risk annoying the guests.
The solution was a compact direct view LED luminaire integrated into the fin, but what of the aesthetics?
The luminaire must look like it was always mean to be there. The fin would require a notch to be machined into it allowing the luminaire to take the place of the wood piece that was removed.
Exactly.
illumination Physics created a custom luminaire to match the 32mm width of the wooden fin. 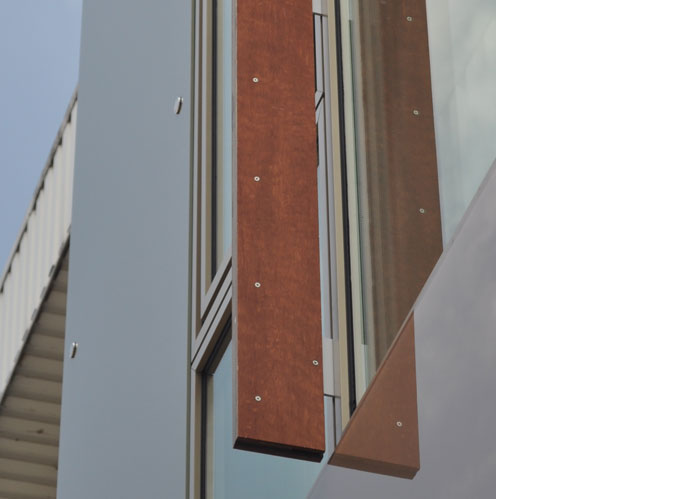 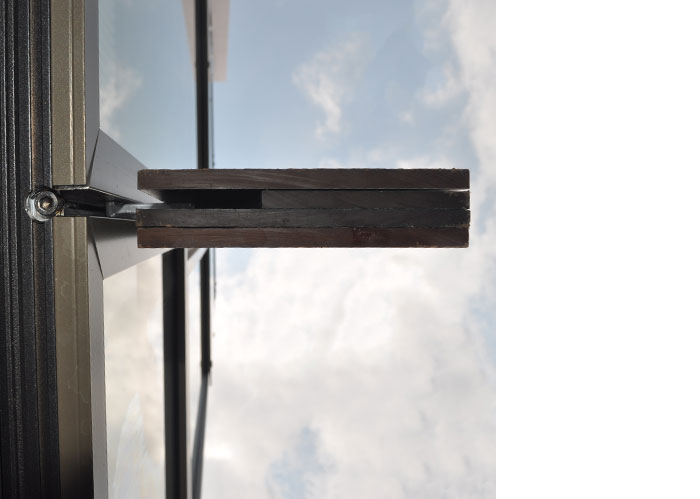 What of the functional properties of this new light fixture? To draw attention, it would need to be capable of dynamic change and be fully programmable. How could this be achieved? What functional properties were required for this new light fixture?
The use of RGB was immediately rejected as crass in this context, but a subtle use of cool white and warm white, used in slowly evolving lighting scenes would satisfy the need to draw attention but in a tempered way befitting the up-market aspirations of the building’s image.
And so an unusual rectangular prism light fixture rapidly evolved from 3D drawings into a CNC machined prototype. A solid PMMA lens would mimic the dimensions of the wood that had been cut from the base of the fin, looking as if it had always been part of the physical design. So much for the aesthetics, what of the technology?
The new luminaire would use high-powered LEDs, the lumen output mandated that choice and this fortunately gave us good latitude to choose consistent and obviously diverse colour temperatures. Technically, however, this high power solution raised some thermal issues that needed management.
High power LEDs can be driven over a range of constant currents, typically 350 milliamps as a popular minimum and up to 1000 milliamps as a rare maximum. Our models showed us that 350 milliamps would be sufficient for the visual effect, but even at that modest current, the six LEDs would generate significant amounts of heat, which needed to be dissipated.
The aluminium body of the luminaire was designed from an extrusion, part of which would hold the LEDs and part of which would act purely as a heatsink. If the fins had been typically made of aluminium, the fins themselves could have been used as an extension of that heat sink. However, these fins are made of wood, which is a great insulator – exactly the property of physics we do not want.
The solution lay in a simple modification to the wooden fins. A slot was opened at the base of the fin just behind the luminaire. The heatsink of the luminaire was designed as a slender cooling fin, itself possessing striations to increase its surface area for convective cooling.

Air was drawn in at the base of the fin, passing over the heatsink of the luminaire and exhausted at the back of the fins via an invisible ventilation slot.

Accommodation of the new luminaire into the façade system required a specially made cable connector with a very narrow diameter of only 16mm so that it could easily pass through the aluminium mullions of the façade system.

The electronic design of the luminaire system was driven by a simple choice; do we include electronics ‘on-board’ each light fixture or do we simplify the luminaire to the extent that it contains only LEDs and nothing else?

For illumination Physics, the decision was obvious. We have no imperative driving us to sell off-the-shelf products; we design products for each project specifically. LED fixtures with DMX on-board may be tempting to use in some environments but the Double Tree Hilton was not one of those. On the contrary, everything was wrong with such a notion!

The luminaire had to be so compact that the packaging of any electronics was very problematic.

Whilst the operational temperature in the luminaire was manageable for the LEDs, this was not the case for the electronics, which have a heat tolerance less than half of the LEDs.

There was also no benefit in an ‘in-series’ electronic design for this building, because of the fin lay-out it would be actually harder to install. 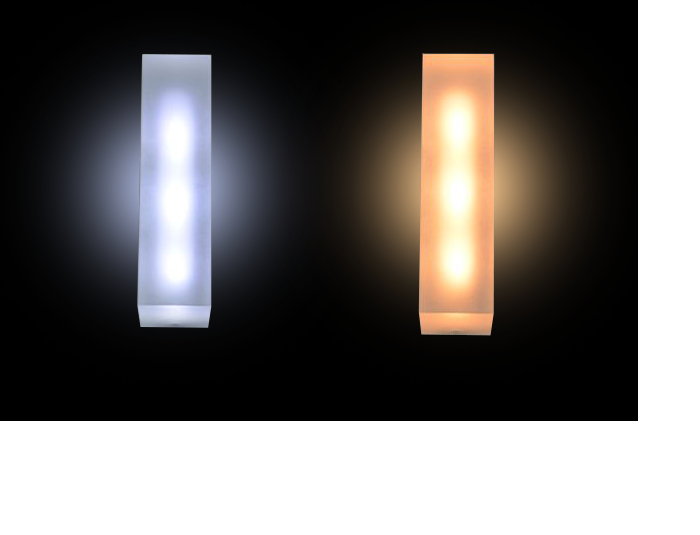 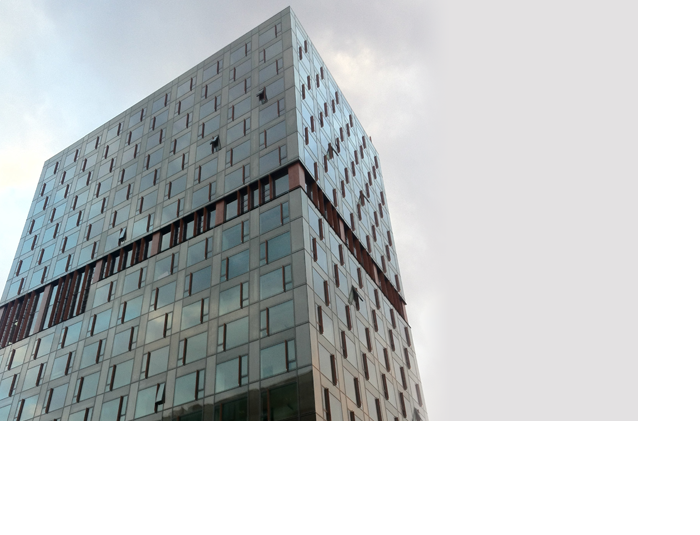 The most logical lighting system design was to use remote drivers located in the easily accessible building core. The luminaires would be reduced to the ultimate durability born of simplicity, connected to those drivers by cables carrying no data, just low voltage.

As always, illumination Physics tailored a complete solution including the design and configuration of the control system. A complete package of control schematics and data distribution products was supplied with the drivers and luminaires. Our intimate understanding of the construction process for modern façades enabled us to deliver an integrated and innovative lighting system that could be installed without extending the overall construction phase. 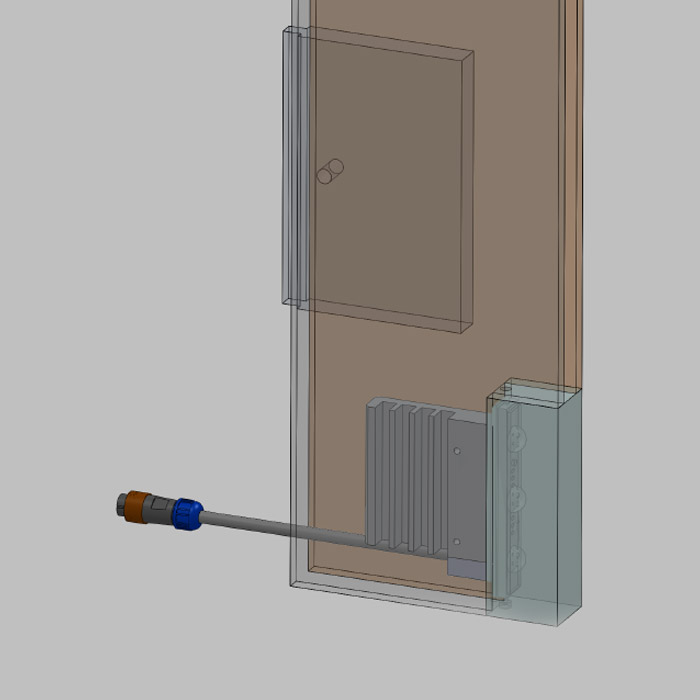 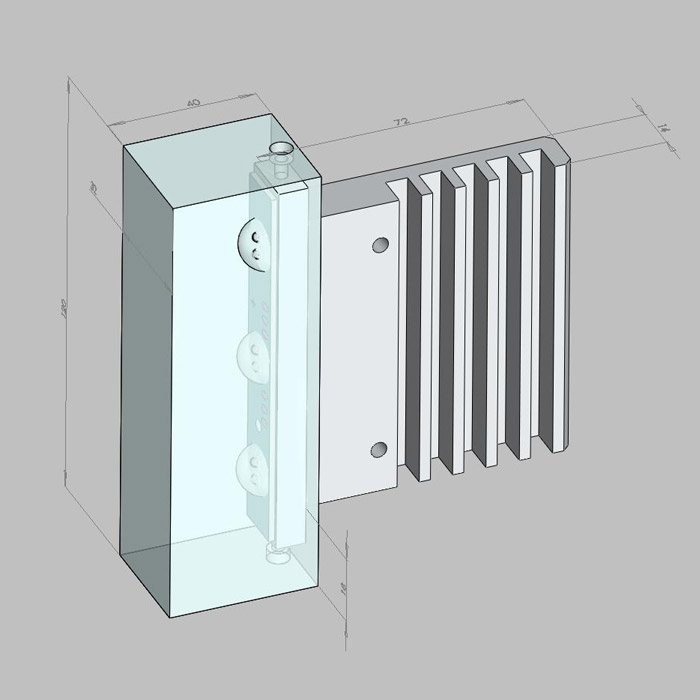 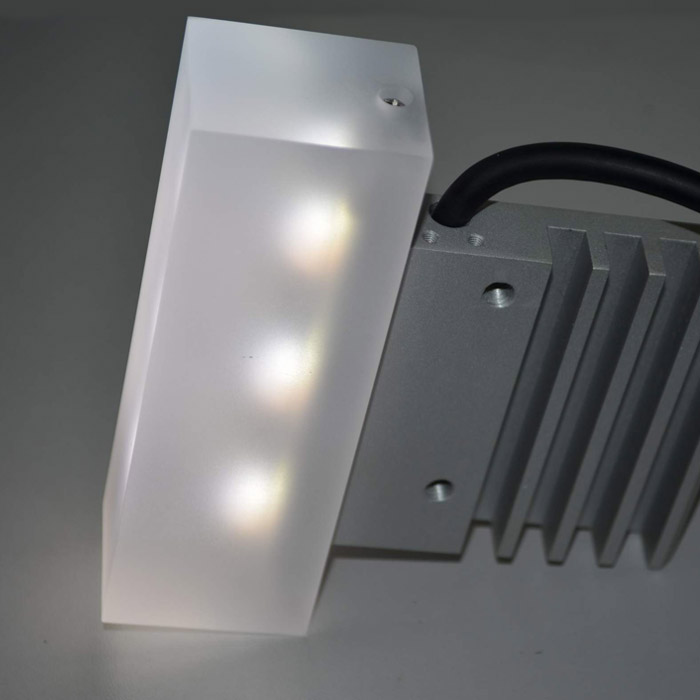 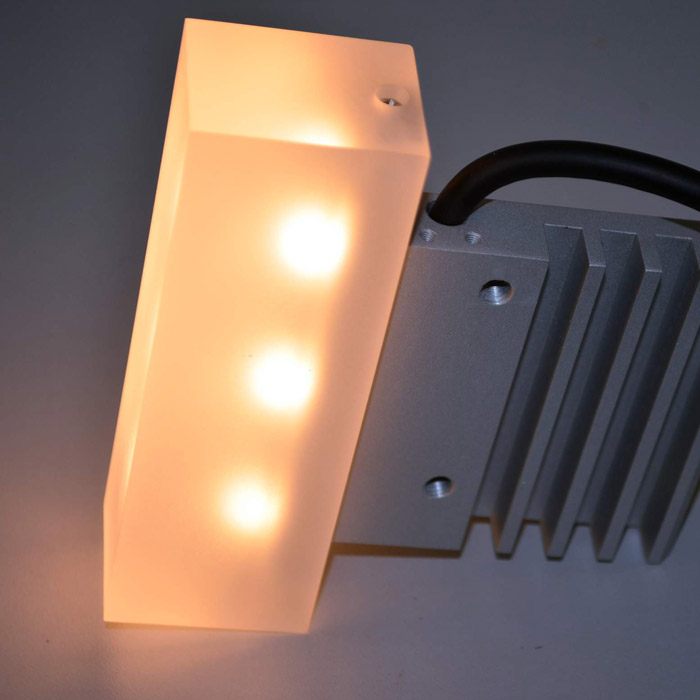 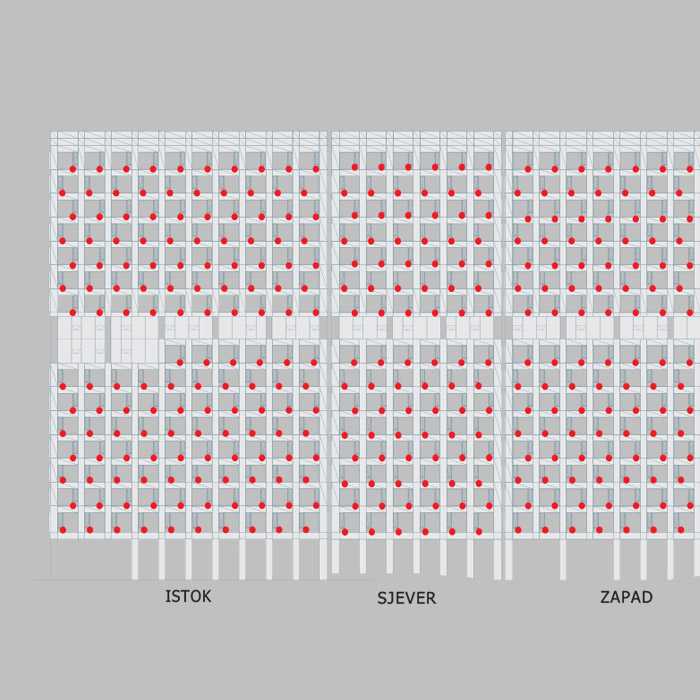