The China Resources building required a custom version of the popular IP BAR. To meet the client’s demands, 4000 metres of LED were produced with a special square profile to match the architectural treatment for the new façade.

Built in 1983 by one of China’s Hong Kong Based conglomerates, the 8 storey tower became home to China Resources Holdings in the same year.
Its broad footprint and 178 metres elevation make the building an imposing landmark, all the more so because of its relatively uncluttered location on the corner of Gloucester and Fleming Roads. The building has a high profile on the island as it is also the home to the Chinese consulate.
In 2008 the time had come for a major facelift. The pace of development in Hong Kong had rendered this grand edifice old fashioned in comparison to its neighbours. Ronald Lu and Associates were chosen to design a new skin for the building that would modernise the structure and simultaneously solve the maintenance issues associated with the existing tiled concrete facade.
The intention was that the building would proudly draw attention to itself and an extensive LED facade lighting design was developed by Spectrum Design.
Illumination Physics was chosen to provide the custom designed lighting solution that would be integrated into the new glass and aluminium facade that would be installed by Permasteelisa.
This project required a complicated project program. The new cladding work would be done from top to bottom. Access to the facades would be provided by tower working platforms mounted on vertical trusses fixed to the building. As the cladding, glass and lighting are installed, the working platform is progressively disassembled. 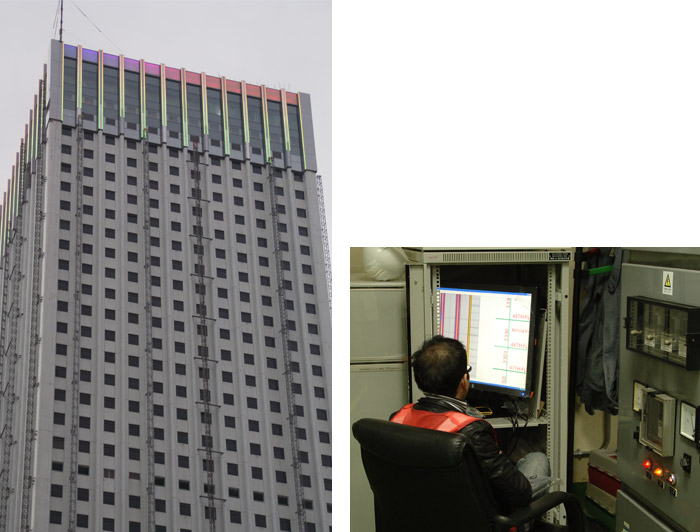 The lighting design is comprised of two distinct but related features;

• A ring of lightboxes that surround the tower at its summit

Both the light boxes and the vertical lines of LED have colour changing capability (RGB), and are synchronously controlled for one composite display.
Each Lightbox contains 6 units of the Illumination Physics ‘Wash 36’ LED wash light.
The Wash 36 uses the latest Philips Rebel SMD high powered LED, producing approximately 9000 lumens for each light box. The AC power version of this product was selected to reduce the installation cost.
The vertical lines of LED presented more of a challenge. During the extensive visual mock-ups the client requested a special profile to be created so that the shape of the LED extrusion was more ‘square’ than the normal ‘round’ profile.
Illumination Physics developed a new version of IP BAR to meet this request. ‘IP BAR Rectilinear’ has a unique profile which is harmonious with the square lines of the buildings features. The Rectilinear version also has the additional advantage that comes with internal rather than external end caps; there is no change in the profile when multiple bars are butted together.
The lighting system is controlled by ‘IP SOFT’ a graphic interface product also from illumination Physics. Both the illumination Physics BAR and the Wash 36 are mapped into one template and the system is programmed in video. 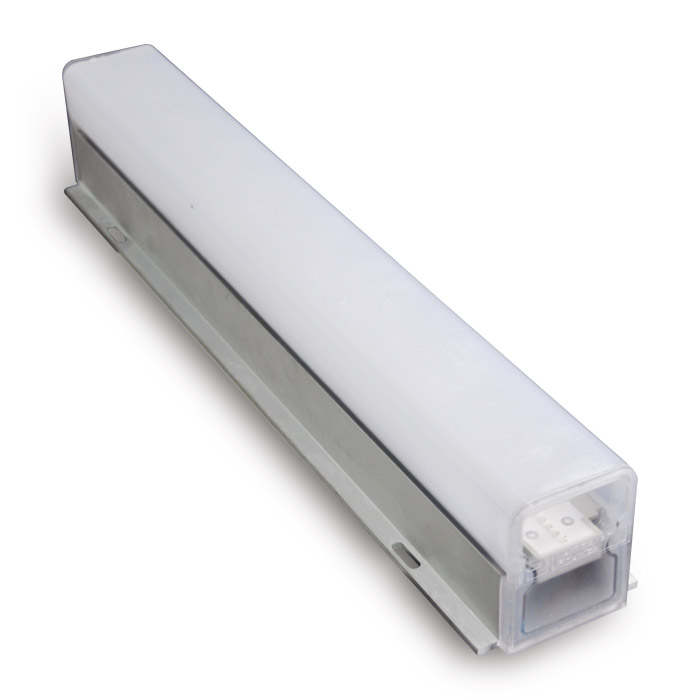 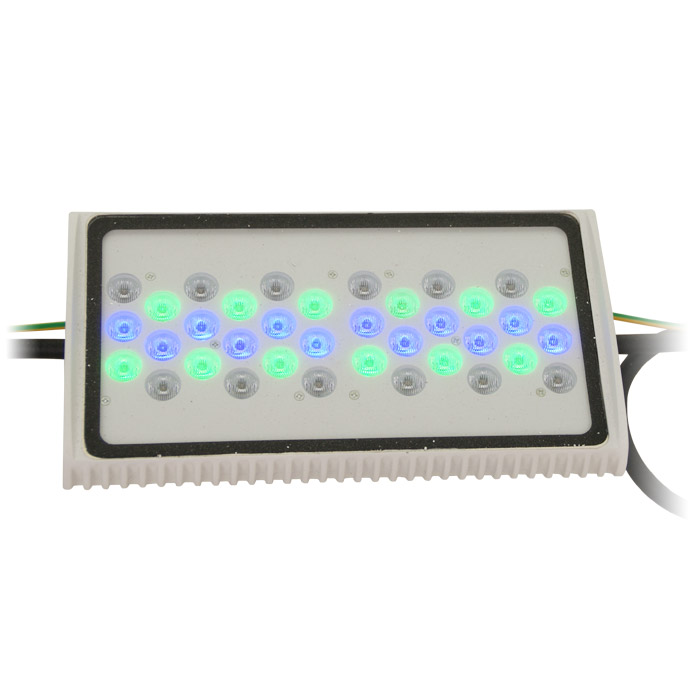 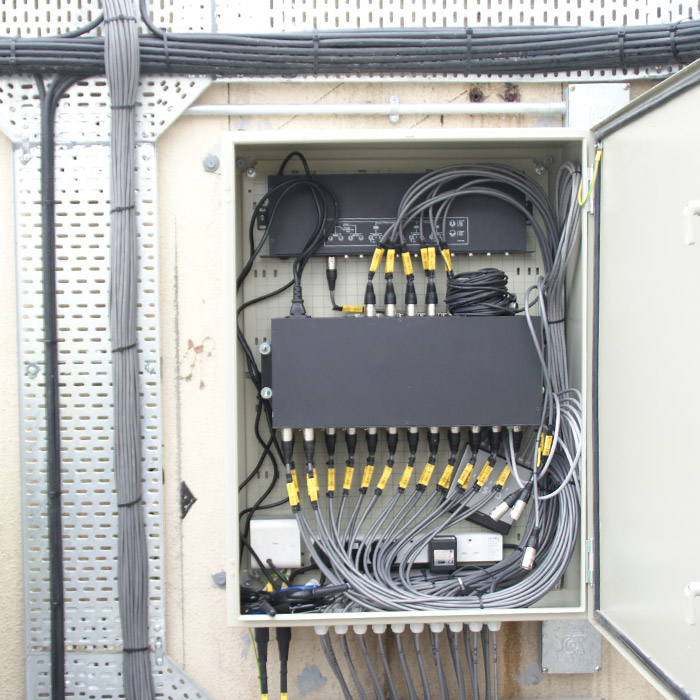 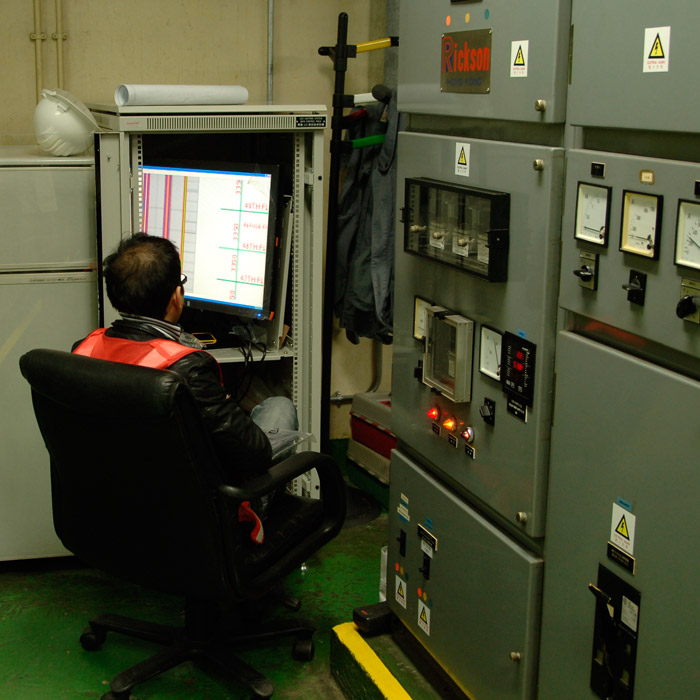 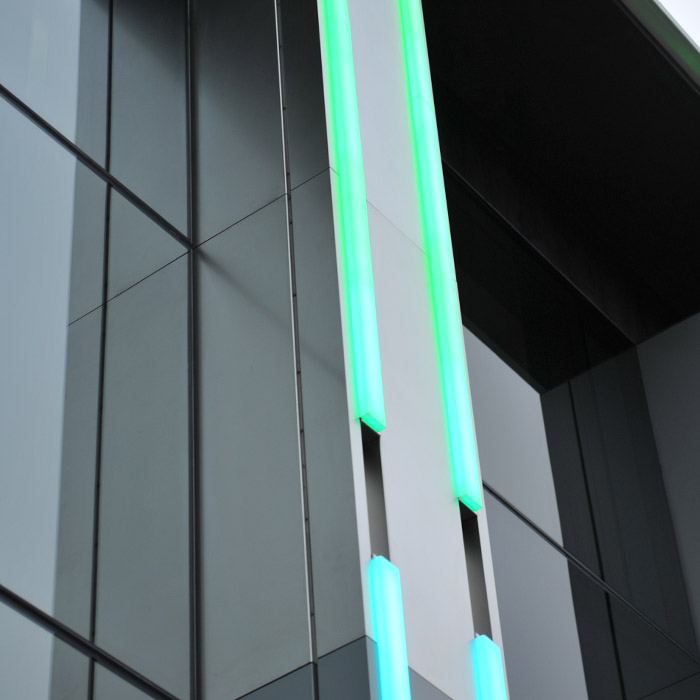