The roll-out of the new brand of luxury cinema experience venues continues following the launch of UCI Luxe at Potsdam. ‘UCI Luxe’ at Mercedes Platz brings the signature luxury brand to Berlin.

However, it is not just the comfortable leather reclinable seats and high-quality media that comprise the UCI Luxe product: the entire Cineplex is part of a total brand experience, and the interior design and lighting provide a strong sense of arrival and expectation. 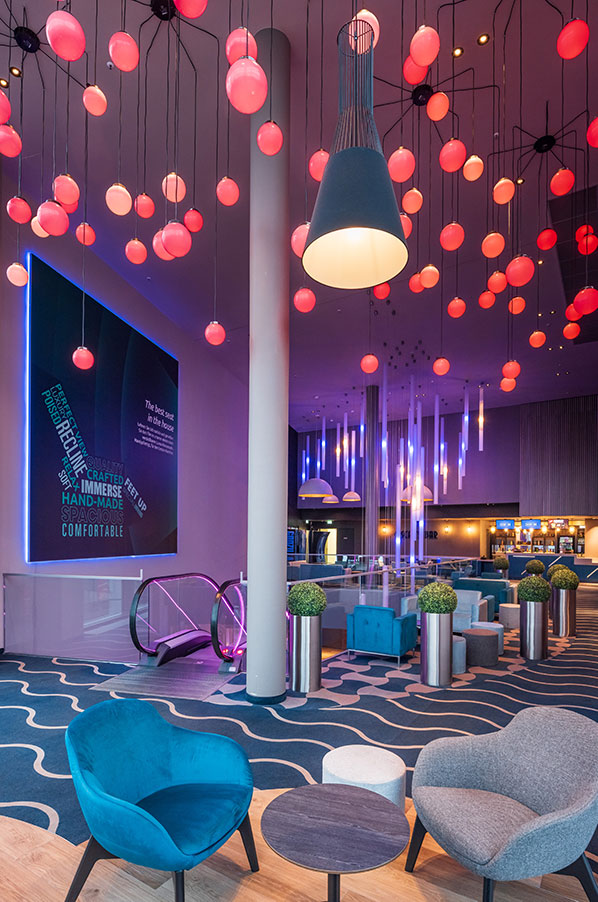 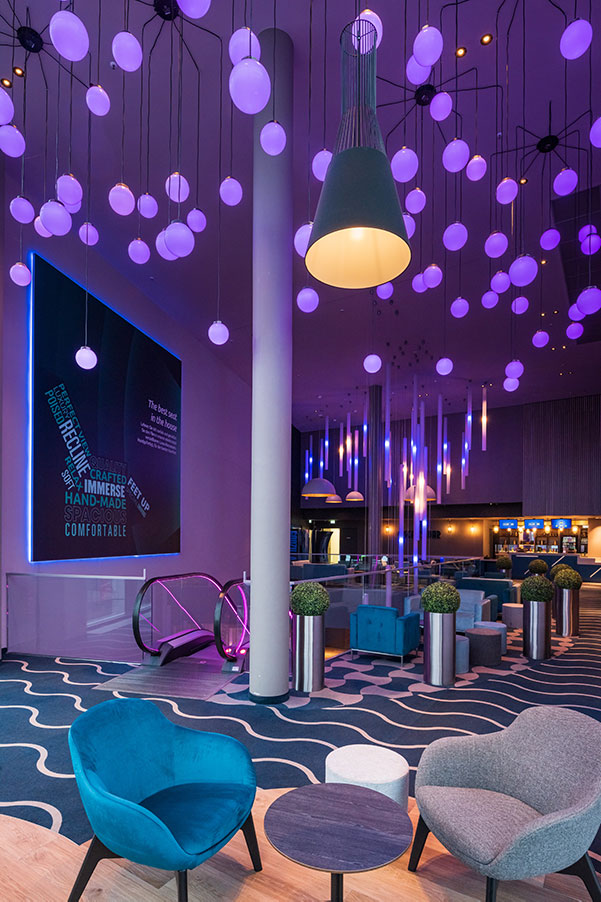 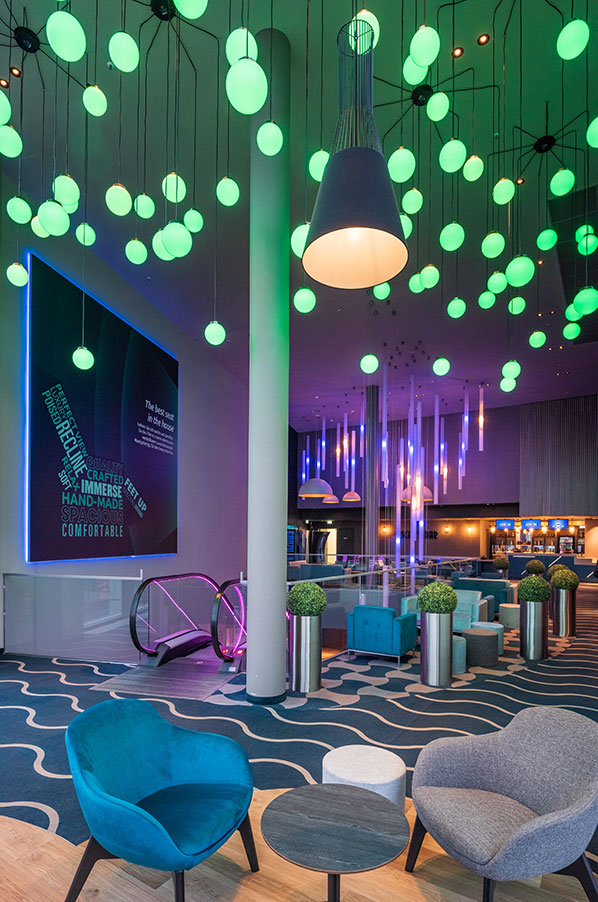 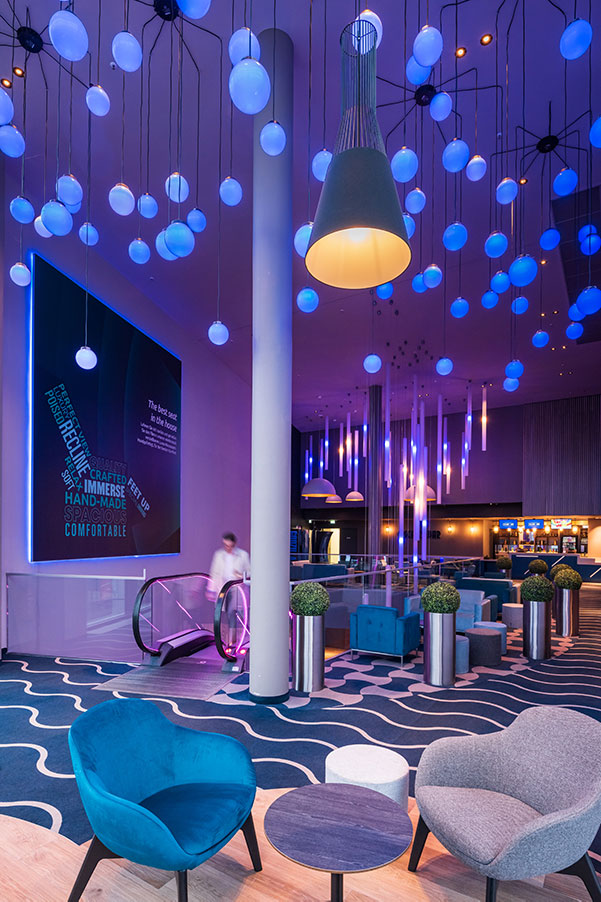 UCI new venue at Mercedes Platz in Berlin is the second of fourteen new cinemas to be created. The architectural design concept of the new multiplex was the responsibility of RTKL in London, in collaboration with the execution architects AUKETT + HESSE Gmbh, Berlin.

The ‘luxe’ image is pervasive in the public lobby zone and food and beverage areas.

A crucial part of this was decorative illumination, and UCI had engaged the renowned lighting design office of Kardoff Engineers in Berlin to develop a lighting solution for the Potsdam venue and now Berlin.

This is the second venue in which illumination Physics has provided the decorative lighting.

Kardoff Engineers’ Jan Wichert is an expert in dynamic lighting design, notable for creating a lighting concept he called Lictwolke, meaning ‘light cloud’, for the first UCI Luxe venue in Potsdam. Four hundred specially-designed illuminated spheres were created and suspended from the ceiling at different heights to create a 3D illusion. Having been a very well-received concept at Potsdam, it was decided to use this design in Berlin, albeit in a different configuration to suit the venue.

The layout and dimensions at UCI Luxe are quite different from the Potsdam venue. In Berlin, the suspended feature would occupy a prominent high ceiling space at the head of an escalator well. Since this part of the lobby is fully glazed, the light cloud is also prominently visible from outside the venue. 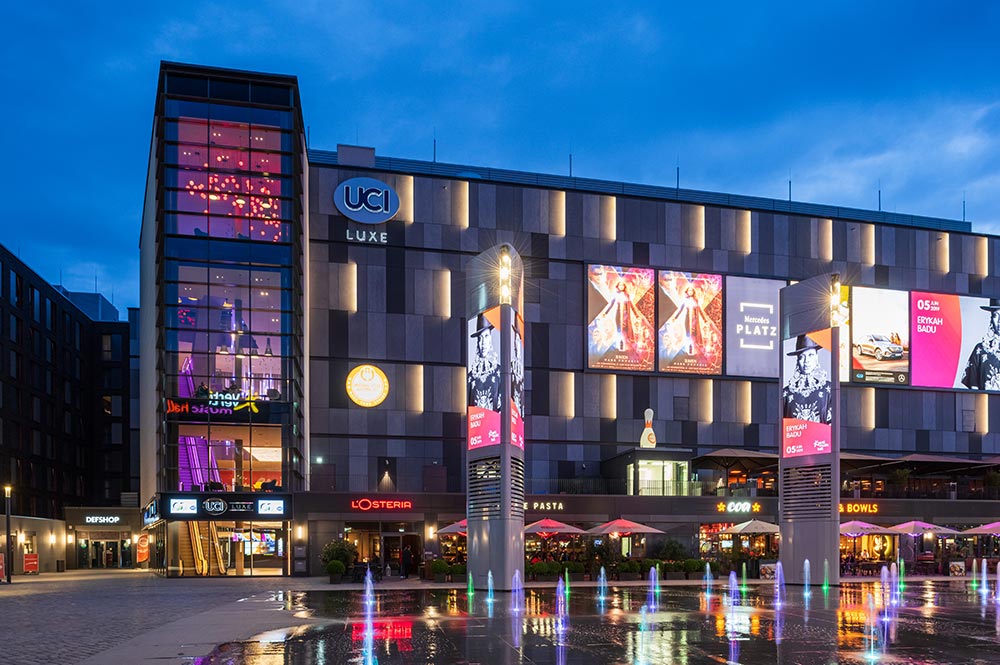 The feature comprises 80 internally illuminated spheres suspended from the ceiling at different heights and in a seemingly randomised pattern to create the 3D illusion required.

Each sphere is individually controllable for colour and intensity; according to Jan Wichert, the cloud of spheres should be used to create different emotional lighting scenes. Martin Opolka, illumination Physics’ European manager, handled the liaison. 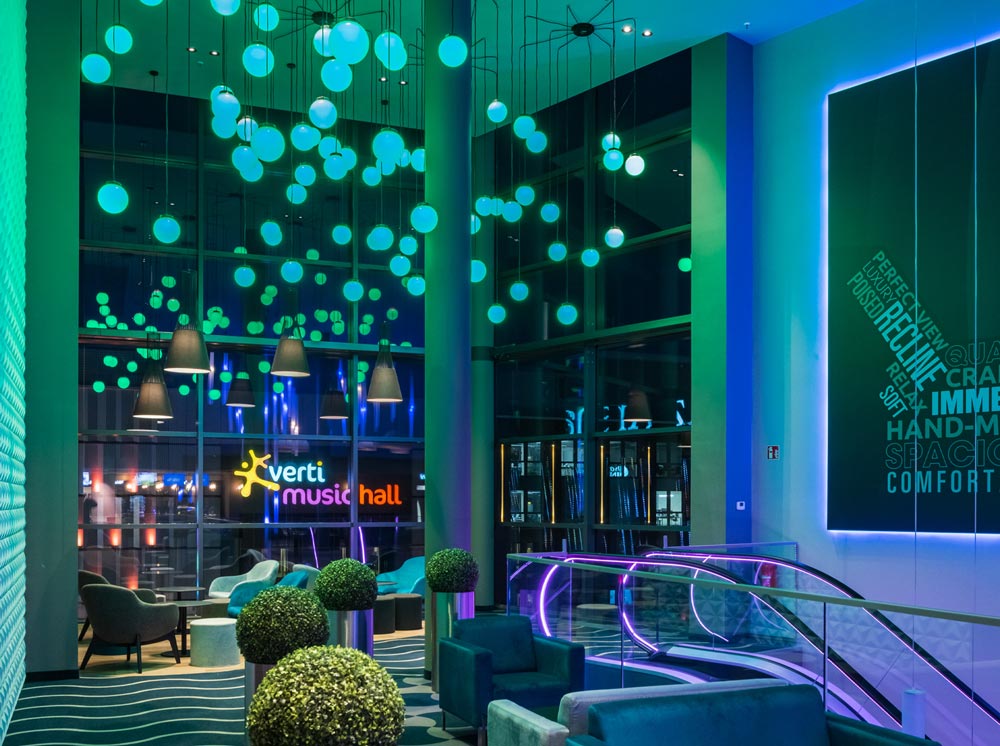 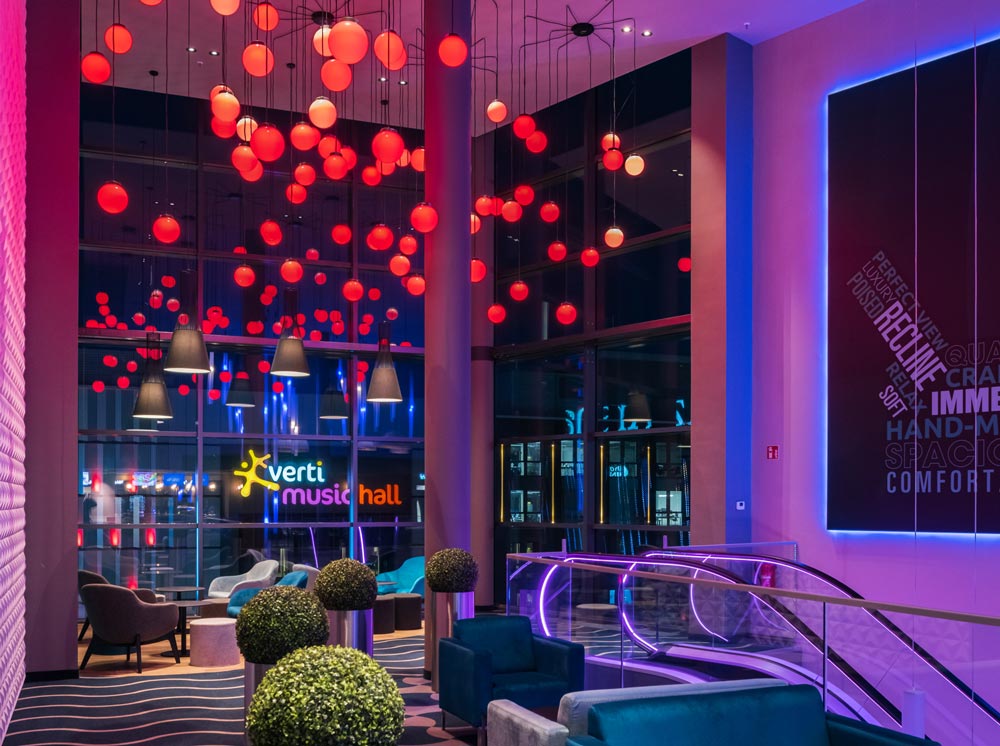 Having already developed and manufactured the illuminated spheres for UCI Potsdam, the current challenge for illumination Physics was the new configuration. We established very high quality and the highest fire rating, a vital requirement due to the luminaires’ suspension above a public area. The Kardoff design specified that the spheres would all be 200mm in diameter so that the existing illuminator need not be changed. The extremely lightweight collar would again form both the attachment point of the sphere and also the mounting for the 12 RGBW LED illuminators. 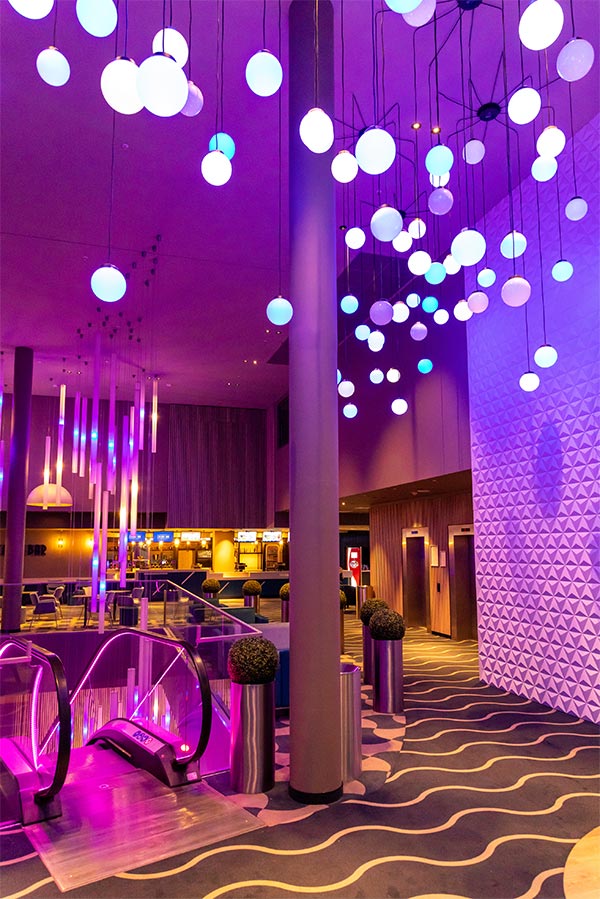 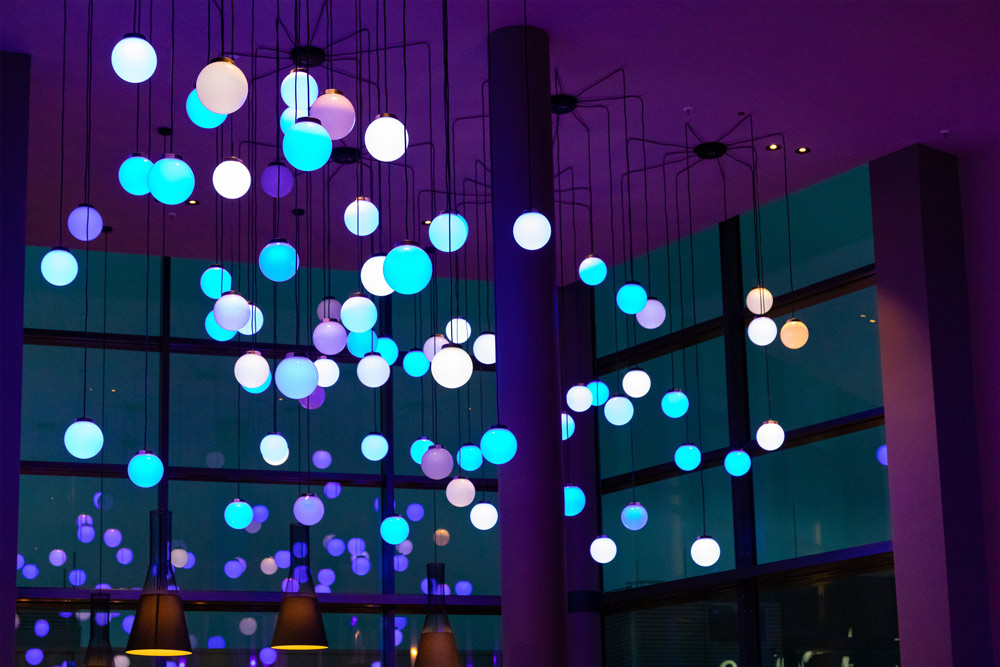 In consultation with the lighting designer, we decided that the grouping of the light fixtures would again be in sets of ten spheres and connected to a central circular mounting node (inevitably called ‘spiders’) containing a power supply and the custom DMX driver. This allowed for greatly simplifying the AC power and DMX data distribution in the single specially designed cable. Thus, we would reuse the ‘spider’ design originally used at Potsdam. 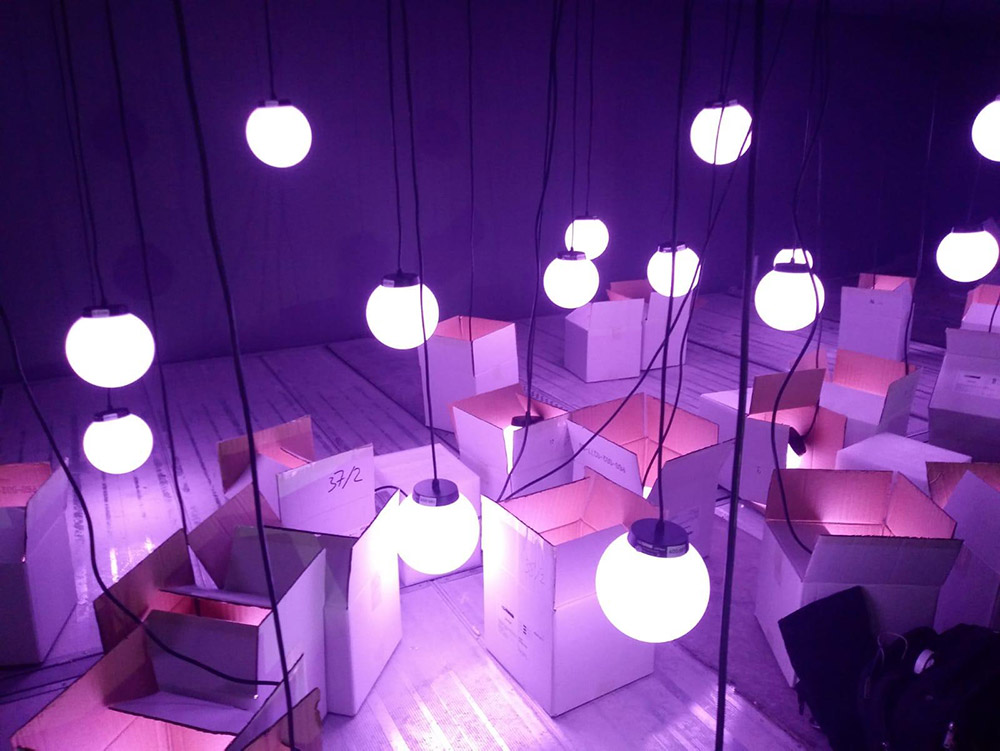 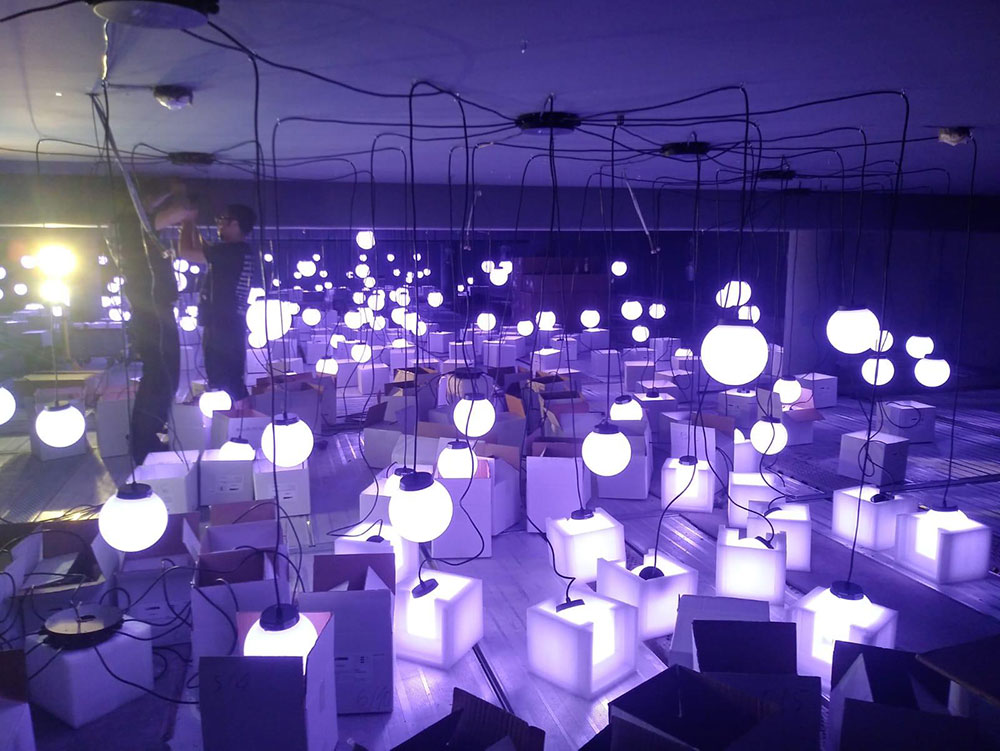 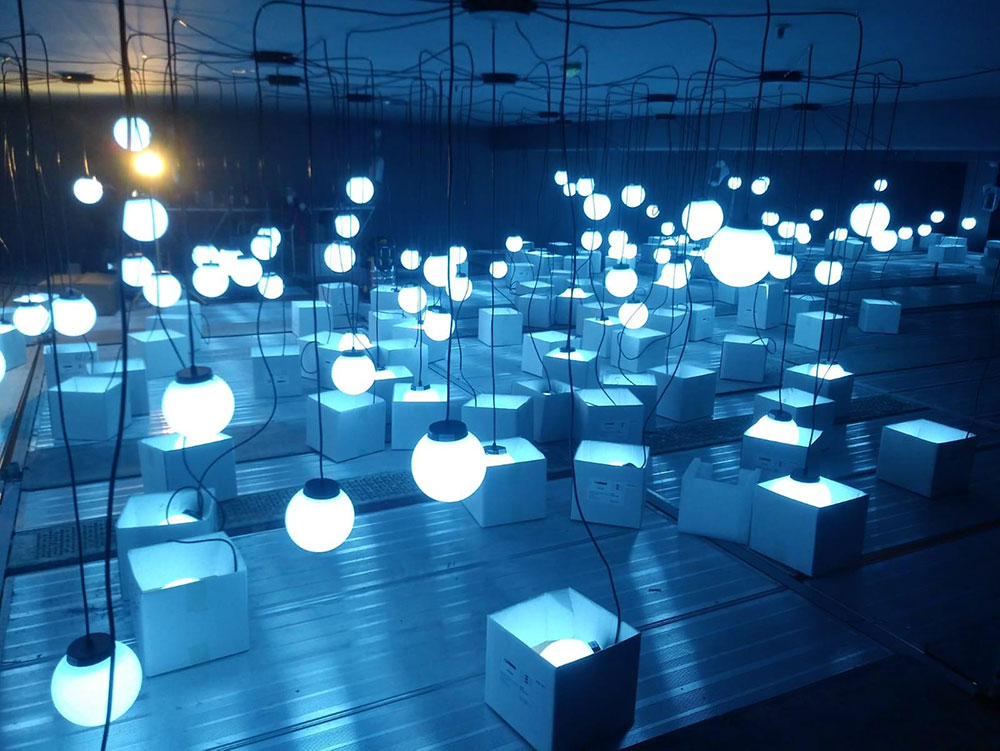 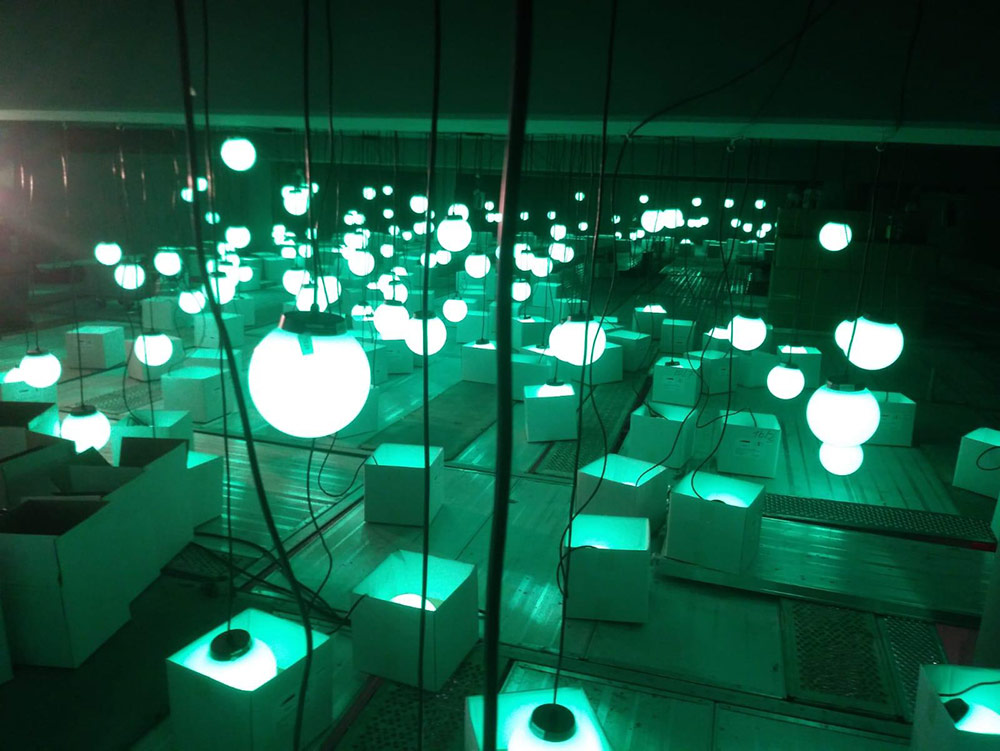 The cables connecting the spheres to the spiders varied in length to create the randomised effect sought by the lighting designer. The spheres and the spiders were factory assembled and tested as a complete unit to streamline the installation. Each complete spider and its ten spheres were pre-addressed in our factory and packed as a numbered unit according to the designer’s designation on the installation layout drawings. illumination Physics’ custom design service ensures the installer’s task is highly efficient as this affects the overall cost. Before shipping to Berlin, all of the DMX addresses were set in the factory to reduce time and cost for the on-site programmer. This is part of illumination Physics’ circle of care that begins with a concept and is completed by every assistance we can provide to the installer.

The suspended circular themed sphere concept has become a fully developed illumination Physics product that can be adapted and applied to any venue as a decorative attraction. 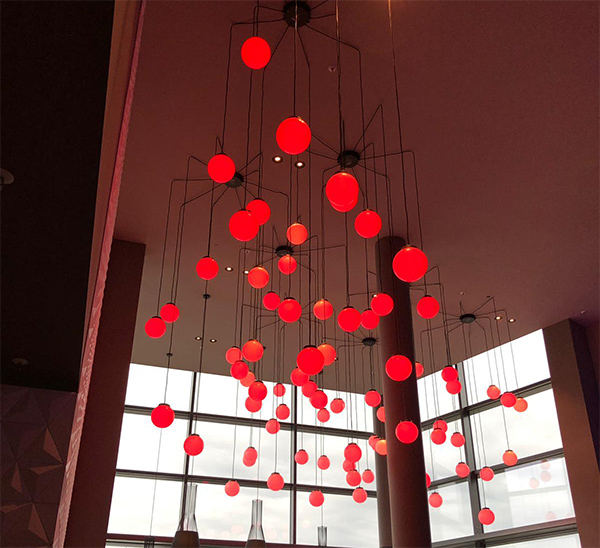 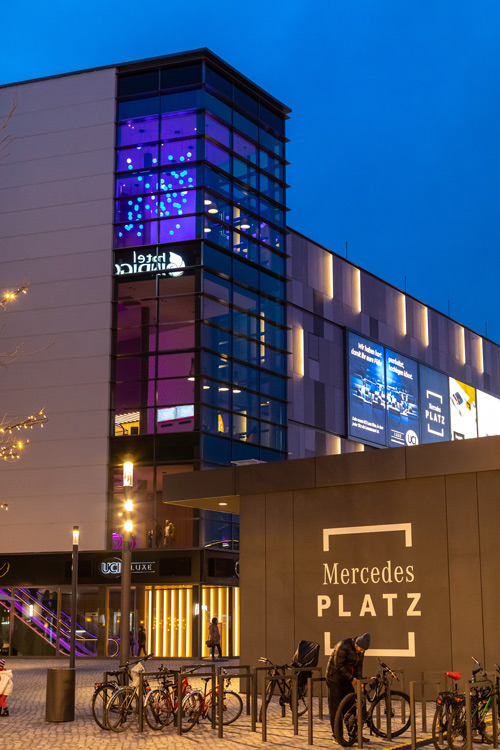 Image Caption: The transparent façades of UCI Luxe’s lobby areas provide intrigue and an excellent view of the dynamic entertainment lighting within, including the ‘Light Cloud’. 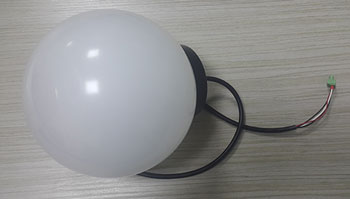 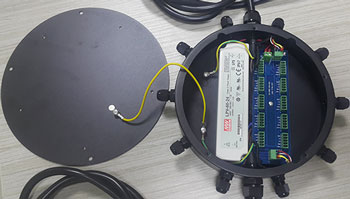