Tiffany have a way of doing things. For over a century, the name Tiffany & Co. has continuously set the standard for luxury and has always evoked images of elegance and exclusivity. Famous for their stunning wedding bands and engagement rings, this iconic American label has been synonymous with love – love that is symbolized and presented in a distinctively bound and universally recognized ‘Tiffany’s Blue’ box with white ribbon. Since being founded by Charles Lewis Tiffany and Teddy Young in New York City in 1837, the company has endured as a brand name that epitomizes quality and craftsmanship.

That Tiffany Blue was developed for print media and photography. In the new era of retail façade design, every store front must be illuminated night and day, in a very particular way that supports the brand.

It is in this tradition of unsurpassed quality and design that the refurbished flagship store in Melbourne, Australia must continue. Located on the famous ‘Paris end’ of Collins street, often considered to be Australia’s premier street and home to an array of exclusive designer boutiques and high-end retailers, this revitalised store symbolizes and celebrates all that we have come to expect from this trademark label. Three years in the planning, the store reopened with much fanfare. However, what was unveiled exceeded expectation by managing to both preserve the architectural heritage of this building and simultaneously catapult it into the 21st century with its unique visual surprise amongst the more somber sandstone façades.

What makes this stalwart stand out in the crowd? Lighting.

In an attempt to capture the attention of retail-savvy clientele, increasingly elaborate technical designs are being employed to create enticing façades for high-end designer brands. Tiffany & Co. are one of the trendsetters in this area and have extensive design resources in their New York headquarters. The culmination of their thorough planning will see each new or refurbished Tiffany store graced by a highly distinctive glass façade that has been innovatively illuminated. Lighting is the new weapon of choice when revamping each store’s entrance and will play a significant role in determining the emotional response to the store from a passer-by. The effect on their loyal customers is equally important; it is paramount that they continue to feel good about their decision to walk through those distinctive doors, the lighting façade needs to be just as powerful. 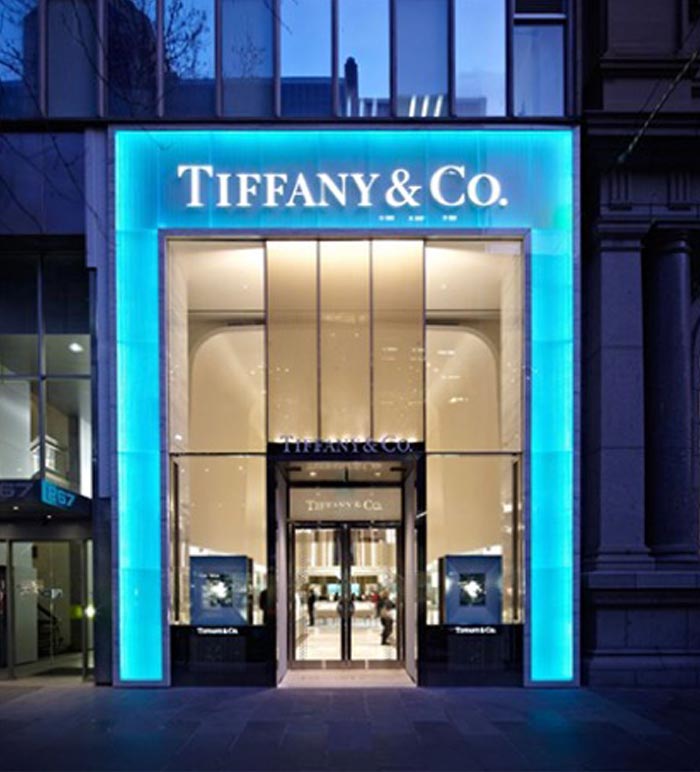 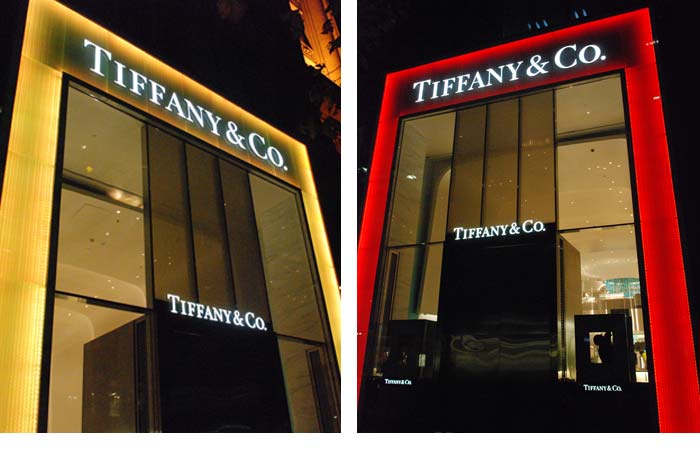 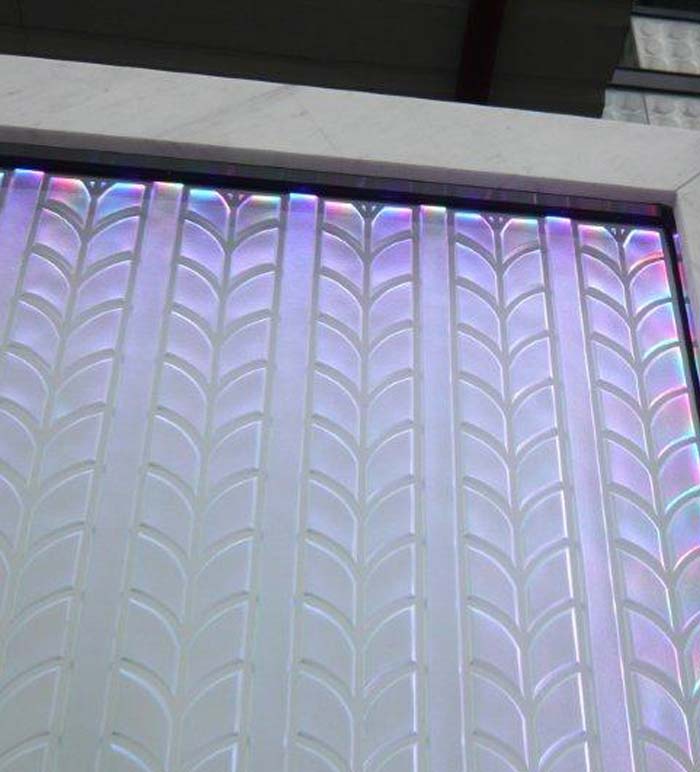 Tiffany’s signature ‘wheat sheaf’ pattern was brilliantly cast into heavy textured glass which not only produced a semi-transparent veil but serendipitously provided a medium to be illuminated. The most important colour to be showcased was the trademark ‘Tiffany Blue’ but other illuminating colours would be required for special festive occasions.
The ‘wheat sheaf’ cast glass entrance needed to be illuminated on its edges for the first time by a hidden linear fixture. There were a number of challenges along the way and the project was further complicated by the extremely limited space and the need to develop a completely new luminaire. The colour and the colour mixing must be perfect.

This would be a design/build project for Illumination Physics, we have been given the concept, now we had to make it work.To create the effect envisioned, it would be necessary for the cast glass to be illuminated from the edges with a high powered LED. As a result, the texture in the glass would catch enough of the directional light to make it appear to glow.

Illumination Physics conducted a number of tests using the Cree XPE LED and quickly discovered that any attempt to use individual RGB LEDs was not going to produce the desired outcome. The space within the frame of the window was so limited that it would be impossible to set the LEDs back far enough to allow the colours to mix, even with asymmetric 10 X 40 degree lenses and 36 LEDs per metre. Scalloping of the colours could not be avoided. Due to these inherent difficulties, this initial approach was abandoned in favour of a 4-in-1 LED module. The CREE MCE was selected as it provided superior colour mixing at the source. Generally, lens control of this LED package would not be as precise as the single colour LEDs due to the MCEs larger size, however adopting the 20 X 40 degree lens proved to be more than adequate.

The 4-in-1 MCE LED package produced the desired results that illumination Physics were aiming for. Even in the extremely cramped installation environment of the window mullions and transoms, the MCE powered light fixture provided excellent colour mixing as was initially intended.

Illumination Physics then set about to manufacture a new aluminium extrusion for the body of the new linear fixture. The aim was two-fold – to create an extrusion that would have the required compact dimensions necessary for installation whilst also having the correct heat dissipation qualities. The remote drivers were positioned in an air-conditioned area within the store.

The Cree MCE 4-in-1 allowed colour mixing of the RGBW colours with a package a few millimetres in diameter. The Cree XPE individual colour LED meant that the smallest distance between lens centres was 28 mm and that the centre to centre for an RGB set would be double that. This beautifully illustrates that the 4-in-1 LED packages are the preferred choice for close proximity applications such as that required for Tiffany’s on Collins.

Overall, the MCE equipped test fixture immediately produced satisfactory test results for colour mixing despite the test module resting on the edge of the glass. The maximum offset was only 20mm due to the constraints of the window’s structural design. However, the superior colour mixing from the tightly packed 4-in-1 LED package produced excellent colour blends.

For control of the façade lighting, illumination Physics sourced a relatively new lighting control system called CueCore. This provided the ability to control the levels of each individual colour within each fixture therefore allowing the lighting of the façade to be totally balanced for each colour look required.

This stunning entrance is an exemplary example of how meticulous planning, innovation and creative illumination can come together to produce an effect that is both evocative and unique. The result is a powerful and distinctive façade that enlivens Collins Street and beautifully showcases the store by bathing it in a variety of colours, including the world renowned ‘Tiffany Blue’.

The 4-in-1 MCE LED package produced the desired results that illumination Physics were aiming for. Even in the extremely cramped installation environment of the window mullions and transoms, the MCE powered light fixture provided excellent colour mixing as was initially intended. 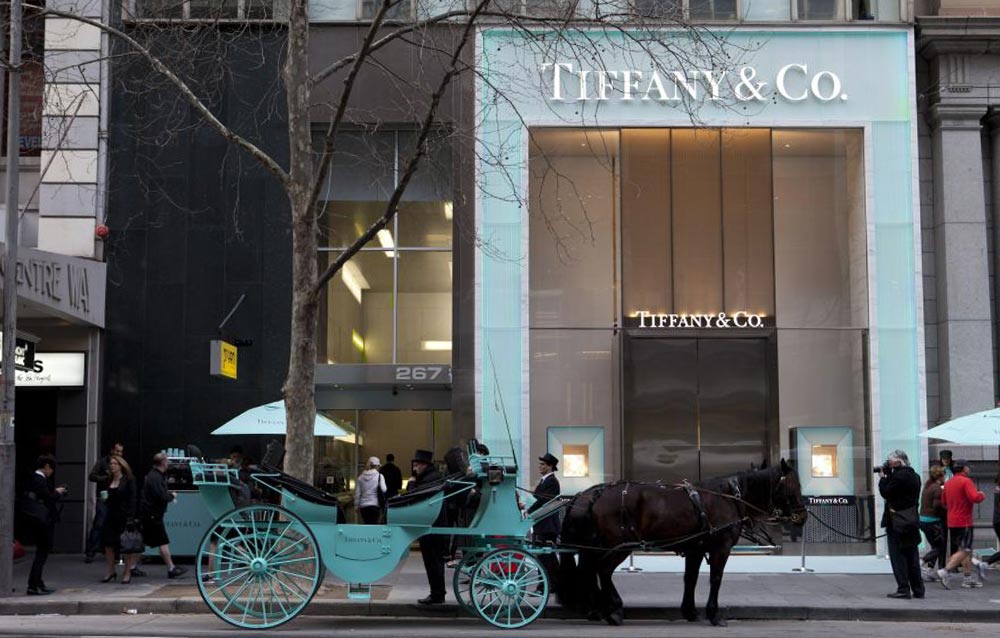 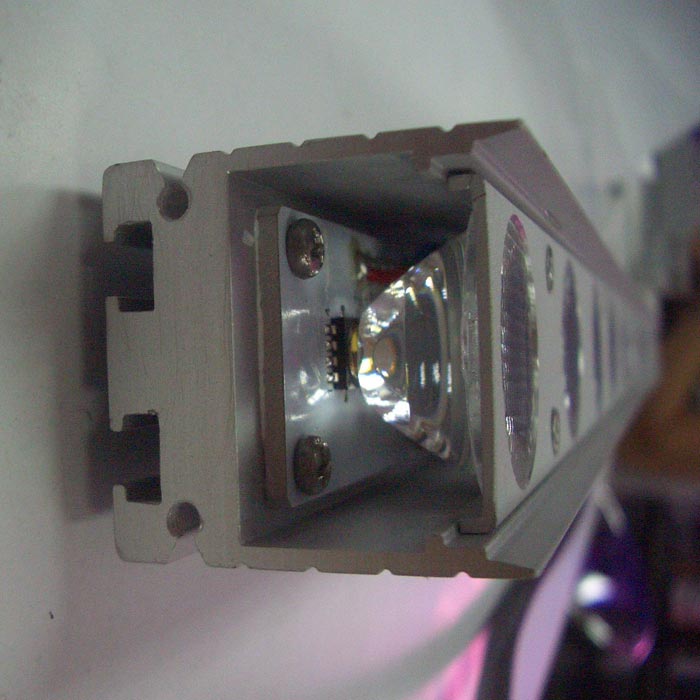 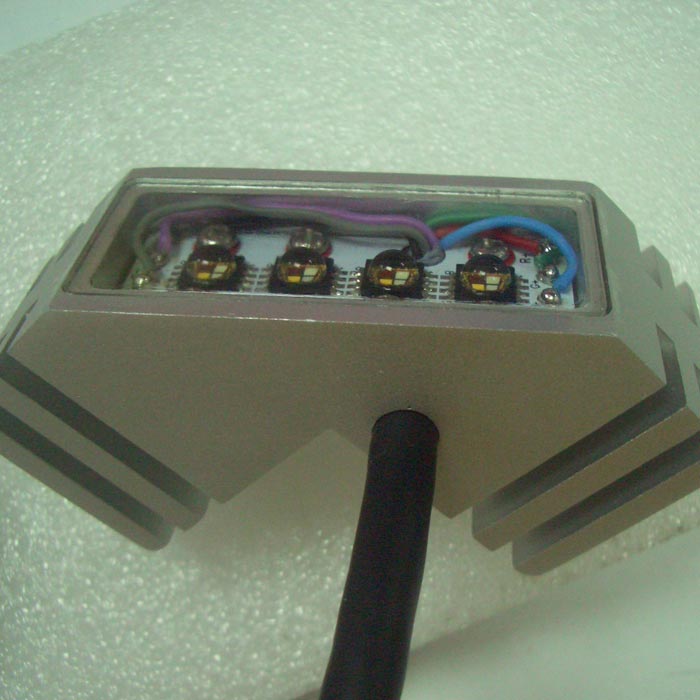 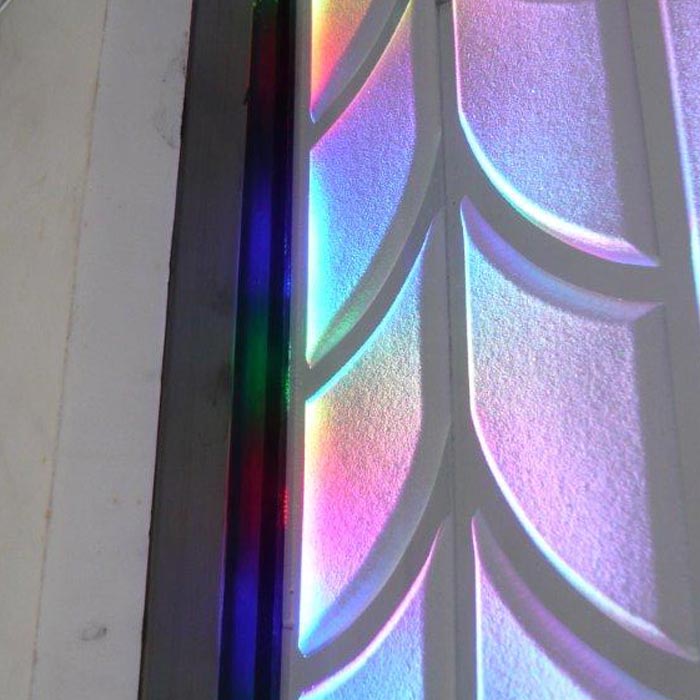