Our challenge was to design

lighting small enough to be installed in the wooden fins enabled the building to be illuminated to great effect without disruption to the construction program from scratch. 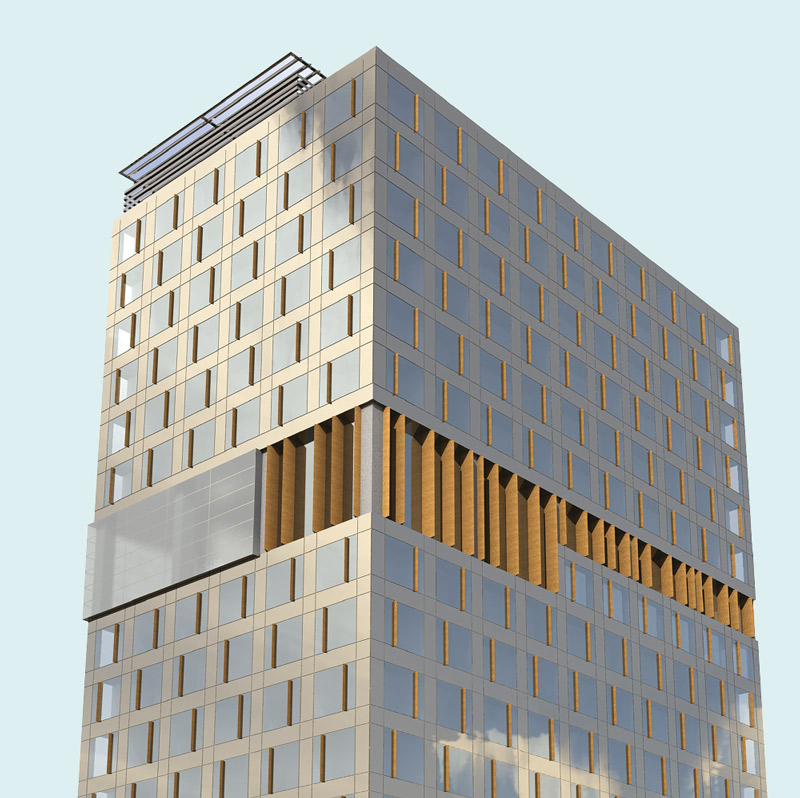 illumination Physics has several homes.
China is certainly one. Our ancestral home may be in Australia but we are formed from a group born of East and West - Melbourne, Hong Kong, Macau, Europe, Dubai and Delhi.

Feng Shui is as familiar as the ‘round eternal of the cash book and the journal’.

The five elements of Qi are ever familiar, occasionally they intrude like metaphors into the modern Asian culture of architectural design. Wood, Fire, Earth, Metal and Water. Health depends upon a harmonious balance amongst these elements.

WOOD AS AN ELEMENT?

In truth, I doubt that the owners of Croatia’s most modern hotel tower were weighing the aspects of Qi, but the inclusion, no intrusion of wood into the integrated façade design, was a statement. Maybe it harkens back to a simpler metaphor of old Croatia. Modernity is combined with an element of a simpler past. Wood, obdurate in its continued use in construction.

This project was introduced to us as we were finishing another project for the client, ‘we have this other tower we are building, what can you do with this one?’

Never mind. This modern tower, a unitised curtain wall, so familiar. Yet it has expressed wooden fins that required to be celebrated at night. illumination Physics, “Deal with it please” was our only brief.
This is what we love, a strong concept that needs development, a vision to create, problems to solve.

Indirect lighting on a glass curtain wall is poor practice; the resulting veiling reflections and light trespass are unacceptable. A direct view solution beckoned. Drawing attention to the wooden fins was a given, so clear was the architect’s intention. Inevitable logic drew us to an indirect light fixture embedded in the fins.

An RGBW fixture seemed crass. Sure, façade lighting needed to be dynamic to satisfy the clients need to draw attention.

But warm white and cool white would be sufficient for this five star hotel.

As always, the devil is in the detail.

The fins are narrow and rectangular, so must the luminaire be.

The luminaires must be part of the fins, not a discordant addition. The luminaire is made of another element, metal, and yet it must seem to be harmoniously part of the wood as if they had grown from the earth together. The dynamic lighting program we would create would resemble Fire and Water, alternately. Harmony would be achieved.

Practical issues followed. The luminaire would have to be very narrow to fit into a slot machined in the hardwood. There would be no room for on-board electronics nor should there be. There was no advantage in connecting the luminaires in series; quite the contrary. Heat dissipation would also be an issue, as wood is a better insulator than a conductor. The lights would get too hot for comfort on a summer’s night if electronics were used on-board.

And so the design of a small and elegant luminaire evolved. Solid aluminium for its body and solid PMMA for the lens. Inside are warm white and cool white Cree high powered LEDs that will always operate in comfort, well within the parameters of the maximum junction temperature. Remote DMX drivers provide the constant current and the variable voltage. 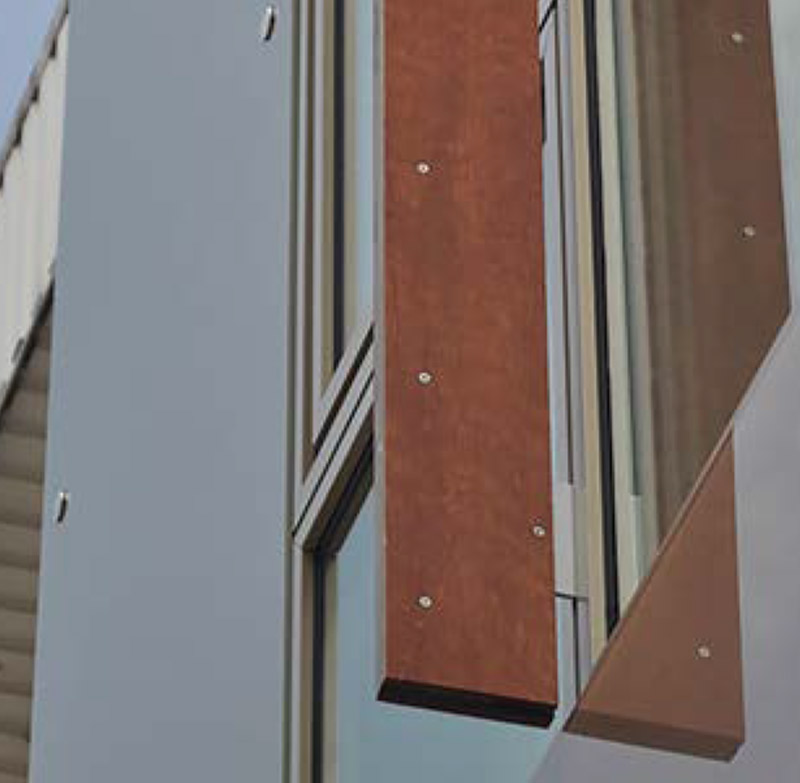 THE SOLUTIONS
MAKE IT WORK

What ensued was typical of illumination Physics’ culture, cooperative creative design development with the client’s team to resolve the detail. A light fixture like none before was required.

The wooden fins are of course laminated. This created an opportunity to create a small void in the centre of the lamination which could provide a path for the cables and a little convective cooling for the light fixture if we could devise an integrated heat sink as part of the luminaire, small enough to fit inside the wooden slot.

The design concept for the luminaire evolved quickly. The wooden fins would be 32mm wide, so the lens of the luminaire would be the same width. A 120mm notch would be cut in the end of each fin and the missing wood would be replaced exactly with the frosted PMMA lens.

Behind the lens and attached to it would be the aluminium body of the luminaire. This was formed from a custom extrusion and its surface area and mass were modelled using CFD (computational fluid dynamics), so that we could study the heat dissipation from the LEDs.
High power LEDs can have a high tolerance to heat,
the junction temperature is the critical issue to be managed. The LEDs we have selected have a maximum junction temperature of approximately 140 degrees Celsius. The keys to managing this critical parameter are the immediate dissipation provided by the aluminium body of the luminaire, its ability to exchange that heat by convection and the driven current we apply to the LEDs. 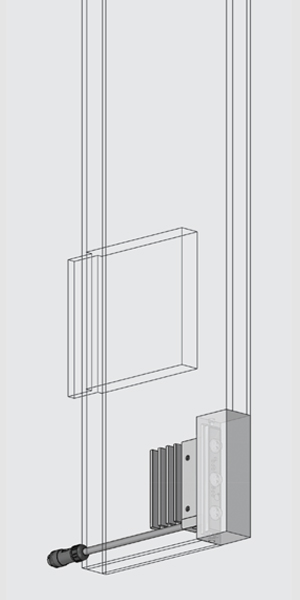 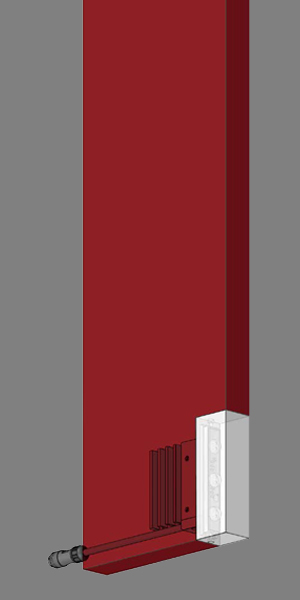 The illumination Physics concept for the Hilton Zagreb. The custom luminaire would be totally integrated into the wooden fin allowing for excellent illumination, dimensional harmony, cooling and efficient buildability. 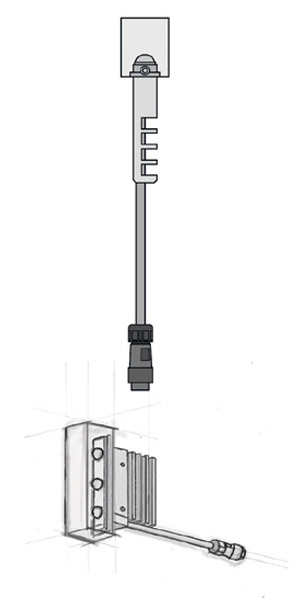 The visual result is arresting but restrained

The luminaire contained three cool white LEDs on one circuit and three warm white LEDs on a second parallel circuit; there would be no other components.

The luminaire contained three cool white LEDs on one circuit and three warm white LEDs on a second parallel circuit; there would be no other components. In this most simple state, the luminaire has been distilled to the ultimate simplicity. There are no fragile, sensitive or short life components involved. It is true that the Cree LEDs we have chosen will have a life of more than 50,000 hours, twenty years perhaps. However, if a luminaire is designed to incorporate any on-board electronics, the service life of the composite light fixture will be dictated by the electronic component with the shortest life, perhaps 10,000 hours, and worse, the fixture will become sensitive to heat.

It is unfortunate in the LED lighting industry that the client is usually misled by statistics. A high quality LED will have a long life provided that the maximum junction temperature is not approached or exceeded. The electronics required to drive that LED have an intrinsically shorter life, it is a DNA issue, not a quality issue. 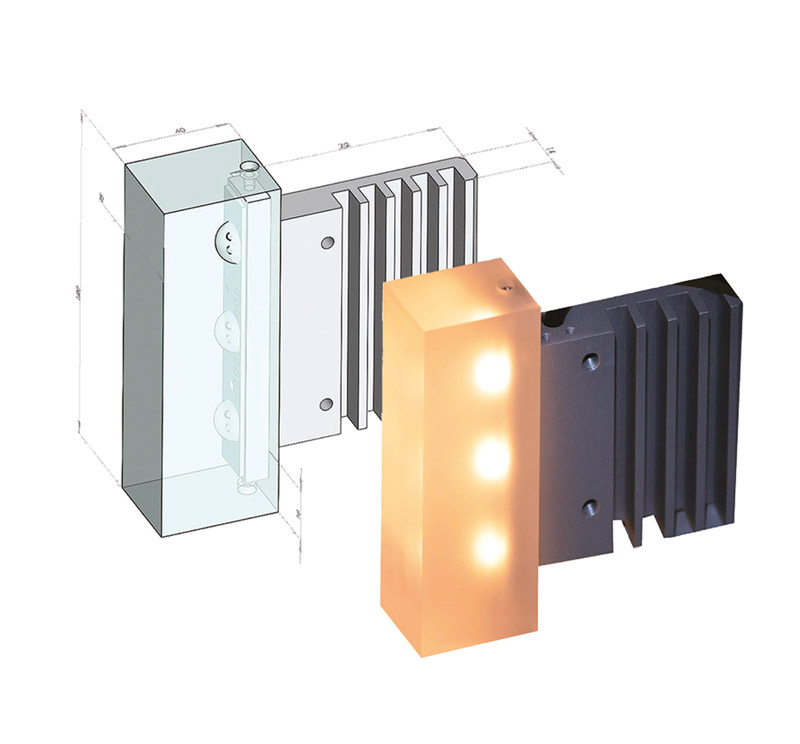 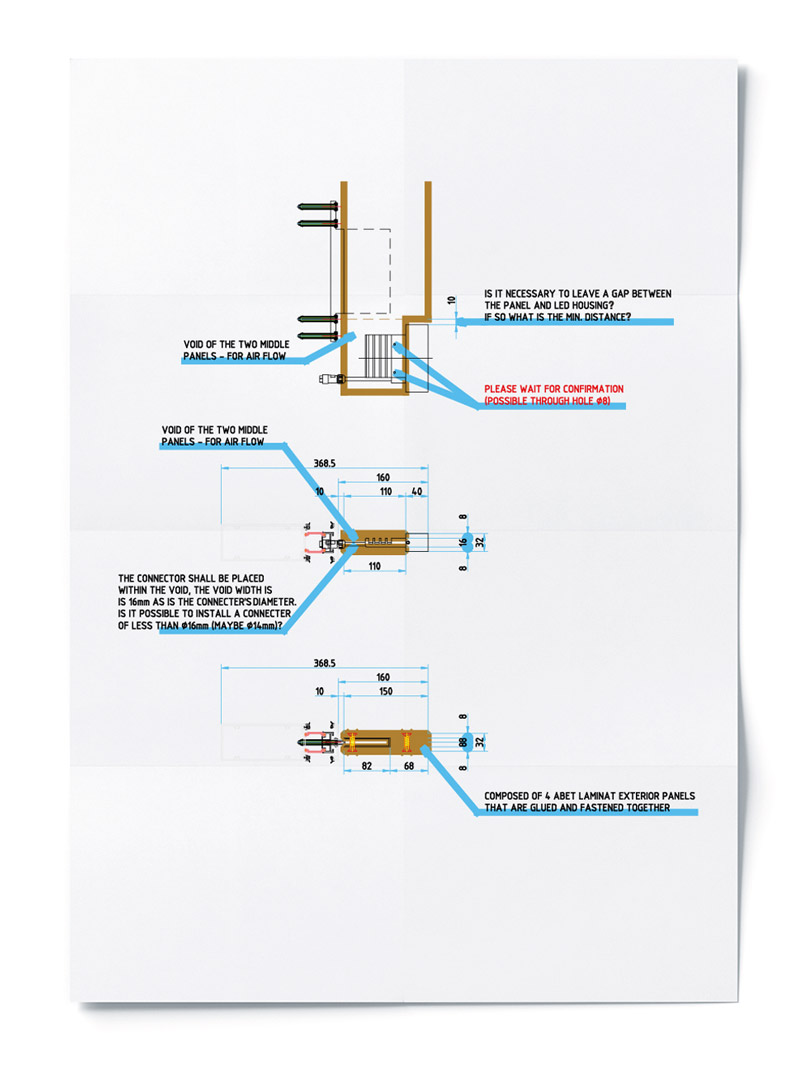 Technically, we knew where we are going with the new luminaire. Our attention turned to the installation details and how the lighting and fin system would be installed without disrupting the construction program.

The Zagreb Hilton has a building envelope of a ‘unitised curtain wall’. This type of façade engineering is popular because it brings a number of advantages. The curtain wall is so called because the façade is divided into panels or units that are hung from the floor slab above (like a curtain) from embedded metal brackets cast into the concrete (‘embeds’). The units are made in a controlled factory environment and the quality is much higher on the production line that it ever could be on a building site.

Unitised curtain walls can be assembled on site very quickly, complete with the wooden fins. This is done without the use of scaffolding or any other access. In designing the lighting we have to make sure we do not slow that process down. It must be installable at the same time as the curtain wall.

Detailed discussions with the façade contractor, façade consultant and the main contractor proceeded. A special connector was developed to minimise the diameter so that it could pass through the aluminium mullions of the façade panels and the fixture was modified to suit the mounting method preferred by the client. We have the green light and fabrication of the lighting system began.

illumination Physics took responsibility to deliver a complete working solution, including the design, supply and programming of the control system. With our projects, the circle of responsibility is closed.

The most logical positions for the drivers were in the hallway ceilings outside the guest rooms so illumination Physics designed a layout, floor by floor, for the drivers which maximised access for maintenance and minimised the cable lengths.

The entire control system could now be documented, plotting the position of every luminaire (Speck). DMX addresses were allocated, four universes created, and a comprehensive control system schematic finalised. The software was loaded on a pre-configured PC. The ethernet to DMX converter and the DMX splitters were delivered with the Luminaires and drivers. 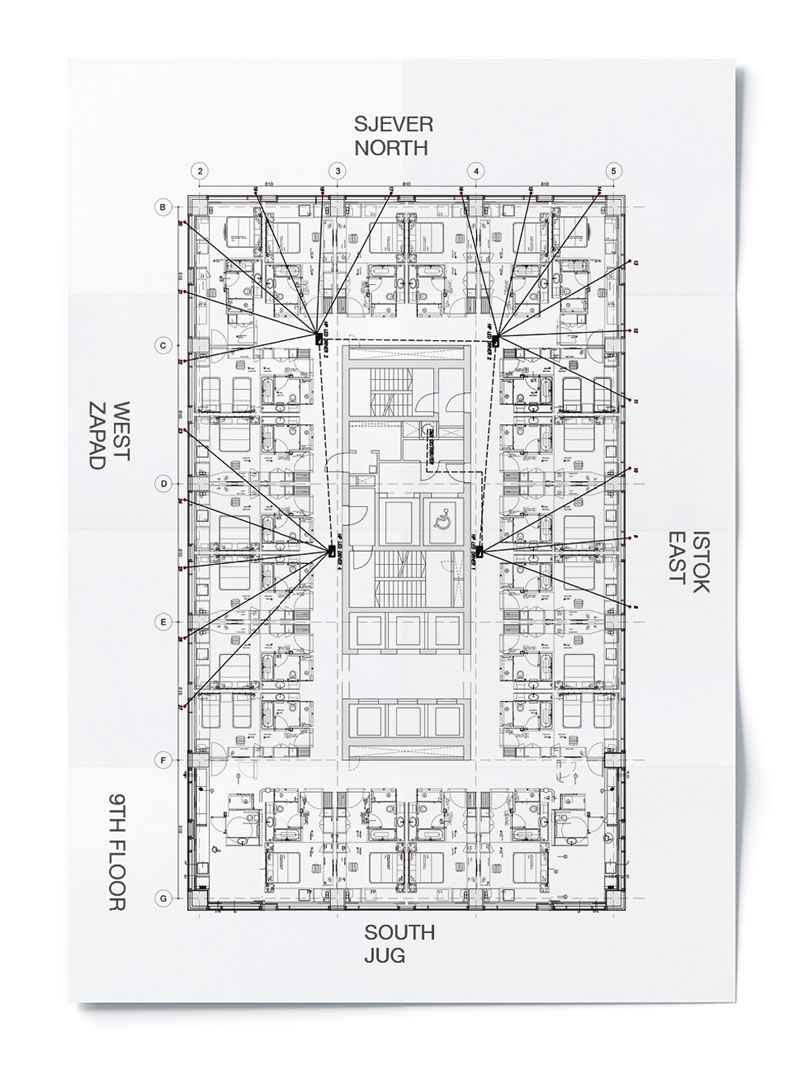 A typical floor plan for the LED drivers. The use of constant current technology meant that voltage drop was not an issue, there was no need to place drivers very close to the luminaires and guest rooms need not be compromised.

The result is exactly what the client was expecting and then a little more. The difficulties of an ambitious lighting design were overcome in an expert and methodical way. In total, 320 light fixtures have been integrated in the building envelope without any compromise to the function of the lighting or the façade. The system is easy to maintain although since the post testing and commissioning hand over, there has been no need for any maintenance. The system has operated faultlessly for seven years in an environment so harsh that hearing about related architectural LED lighting system failures is more common than not. This project typifies the illumination Physics method of approaching a problematic project. Eschewing any compromise, we have delivered a total solution - the circle of responsibility complete. The Physics of Illumination has taken priority over all else.

The result is exactly what the client was expecting and then a little more. The difficulties of an ambitious lighting design were overcome in an expert and methodical way. In total, 320 light fixtures have been integrated in the building envelope without any compromise to the function of the lighting or the façade. The system is easy to maintain although since the post testing and commissioning hand over, there has been no need for any maintenance. The system has operated faultlessly for seven years in an environment so harsh that hearing about related architectural LED lighting system failures is more common than not. This project typifies the illumination Physics method of approaching a problematic project. Eschewing any compromise, we have delivered a total solution - the circle of responsibility complete. The Physics of Illumination has taken priority over all else. 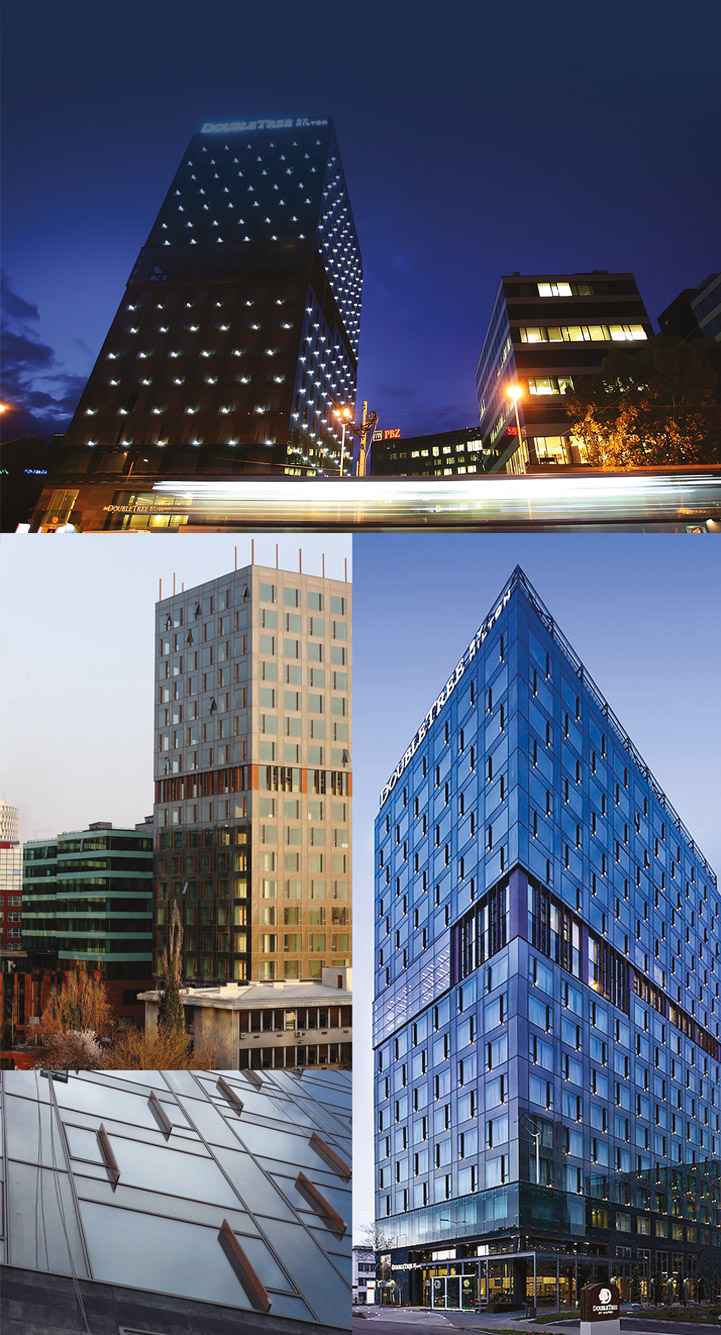