L’Avenue is a new high-class shopping mall and a major landmark building in Shanghai.

The visual information of the building contrasts traditional architecture. L’Avenue is everything except ‘straight’. The corners are not corners, but rather, random turns. The transom lines rise and fall organically and the façade of the tower is not rectilinear, as one has been trained to expect either, as it bulges on one side and bows on another.
All curtain wall structures are driven by simple mathematical progressions but the DNA is truly complex with this one. It is the tower that fools the eye the most as it rises out of a ‘necklace’ (actually a seismic collar) that forms the boundary between the sprawl of the podium and the vertical surfaces.  This structure is unusual at the very least, fascinating at best.
The ‘devil is in the detail’ they say and therein is the third inevitable level of acquaintance. As the lighting equipment designers and providers we had to pay close attention. This was a bold bit of building that required uncommon skills as the podium needed to be fabricated on site. This added another degree of difficulty to the project when one considers that the compound curves would need to be tiled.
Illumination Physics were not the first lighting professionals to attempt the task. A logical and inevitable design concept had already been drawn. The tower and the upper skin of the podium have been decorated with several thousand metal fins that overlap each other’s dimensions; odds and evens like a cross-stitch.

Illumination Physics were handed the basis of a design. Our aim was to make it better; more practical, more buildable and able to be integrated into the process of construction. Fortunately, we were able to influence the metal design of the façade.

We were positioned someplace between artisans and mechanics in the battle for this project. It was a most coveted prize for 2 reasons: It was Shanghai’s most unusual façade and one in which the lighting systems would be integrated into the structure as if they were an organic part of it and not merely an afterthought, as is often the case in façade lighting.
Lighting the fins was logical but there were practical problems, which we overcame. The concept design proposed to use a string of pixels; LED nodes on a string of cable with an RGB driver at the head. This seems like the logical solution as the flexible cable enables one to cope with differing fin lengths. However, without a diffused layer between the viewer and the LED all one would see would be a row of dots. Thus, a layer of partially opaque acrylic was proposed for the front of the fins so as to even out the ‘dots’.
This structure was highly problematic because of the need to account for wind loads and the unstable nature of what is basically a flexible strata of plastic which would somehow need to be bonded to the aluminum. Access to the LED for maintenance was also a problem with this approach, as was ingress of water and grime. The fins could never be rated at IP65.
We kept the essence of this visual concept but decided to stick with our normal technical approach requiring that the light fixtures be self-contained components that fitted into the metal fins and butted end-to-end to form a continuous display with no visible joints. Each and every fixture would be completely sealed against the elements and easily removable for maintenance if the need arose. Illumination Physics have illuminated many façades in the last decade.
Recent work for large façade engineering companies trying to integrate façade lighting into their scope has also provided an excellent construction industry perspective on what are acceptable costs. L’Avenue is a high quality building. The detail is wonderful. However the cost for the lighting must achieve value for money and it is folly to allow a technical lighting design to run up a bill that will be unacceptable as a percentage of the overall build cost.
We attacked the problems one by one and ensured that we prioritized the most pressing issues. Illumination Physics' Peter Kemp and Simon McCartney worked alongside Janine Dettki, a façade engineering designer from Josef Gartner in Germany. We collaborated around a virtual drawing board to create the L’Avenue façade design.
Another problem arose as it was discovered that every fin length on the L’Avenue building is different. As the task of creating a thousand different custom lengths was impractical, we explained to the builder that we had set a pixel size of 100mm so the length changes can be 500, 600 etc. An acceptable tolerance was arranged as we could not make endlessly varying lengths of a modular lighting system. Fortunately, custom fixture design is typical for Illumination Physics and so the complex bill of quantities could be accommodated within a factory designed to develop prototypes and develop technical products.
L’Avenue is equipped with an Illumination Physics control system which includes all of the software and hardware. Our scope also included programming and the creation of a number of animated and non-animated sparkling displays. 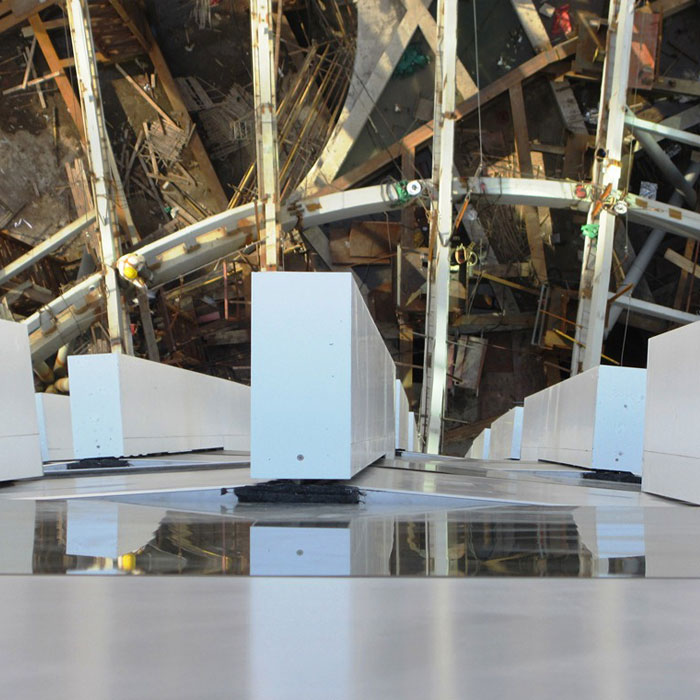 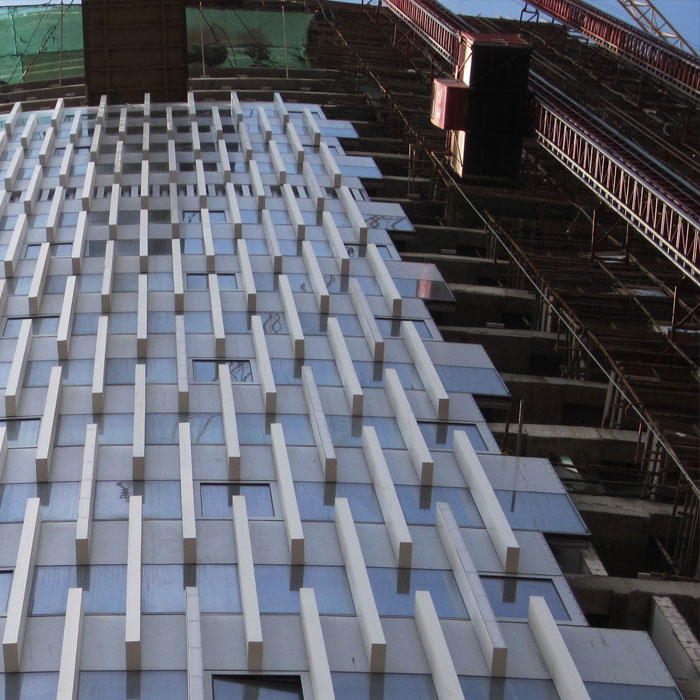 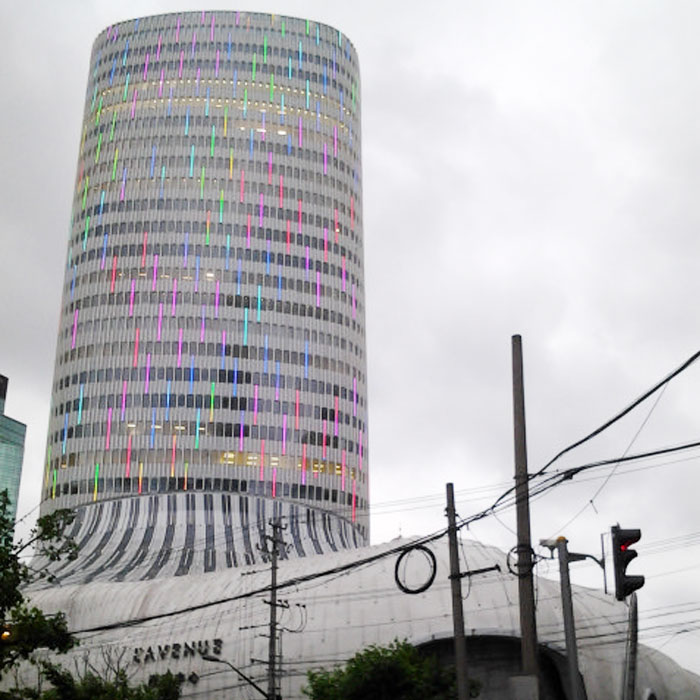 Our business model is to provide complete solutions so that the circle of responsibility is complete on such complex design/build projects.

The results of illumination Physics’ ‘Built-In Design’ speak for themselves…

L’Avenue grasps your attention in a way that a rare and truly valuable art piece does. You cannot miss it and you cannot easily look away once you have been captivated. 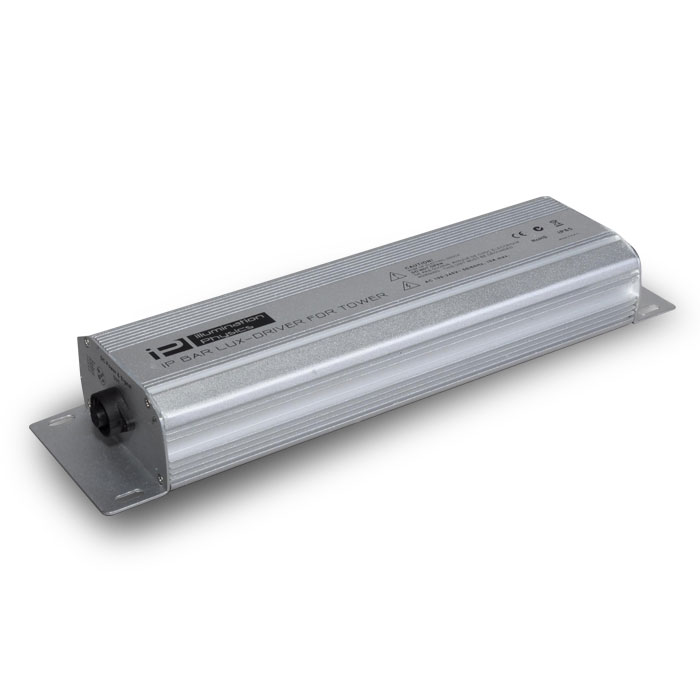 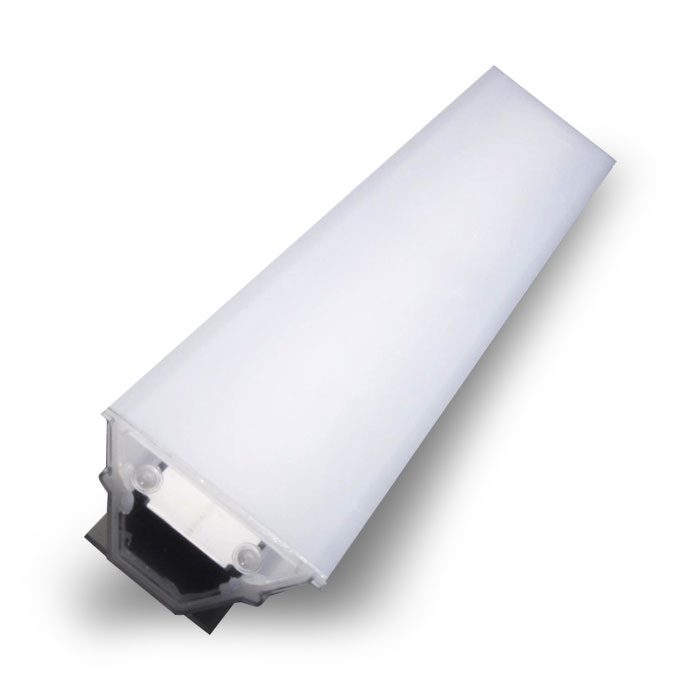 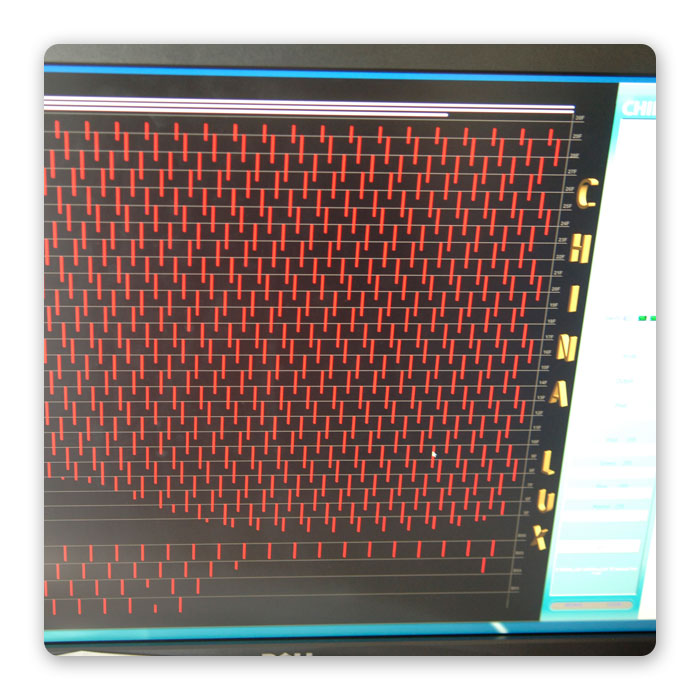