The Centerpiece, a
vision in white

The new structure dramatically enhances the sense of arrival for this integrated resort and illumination Physics was entrusted with the lighting of the façade. This is the second major property on the Cotai Strip in which illumination Physics have been responsible for the design and build of the façade lighting, having completed Studio City in October 2015. Both properties are owned by Melco-Crown Entertainment’s Lawrence Ho.
The City of Dreams retail expansion links world-class entertainment and gaming facilities to dining and exclusive luxury shopping brands. The illuminated façade needed to promote an alluring invitation in a style befitting the luxury brands awaiting the customers behind the façade.
illumination Physics has designed and built the lighting for many high end retail stores in recent years – Tiffany, Louis Vuitton Frankfurt, Giorgio Armani and Ermenegildo Zegna. However City of Dreams is in Macau, not Europe, Hong Kong or Melbourne and the expectations of a predominantly PRC clientele requires a little more excitement. The trick was to find the balance between sophistication and showbiz. Complicating the creative process were a number of technical and practical limitations and the final lighting design needed to address and solve these requirements.
At City of Dreams there are a number of classic elements to the lighting surrounding one dominant, unconventional and innovative centrepiece. 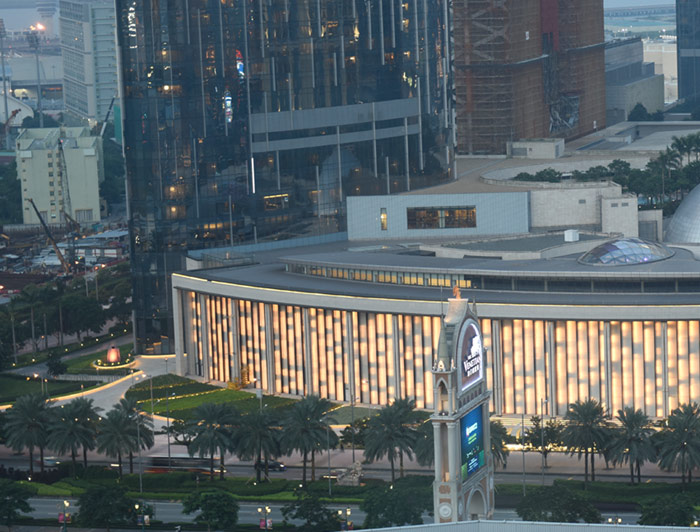 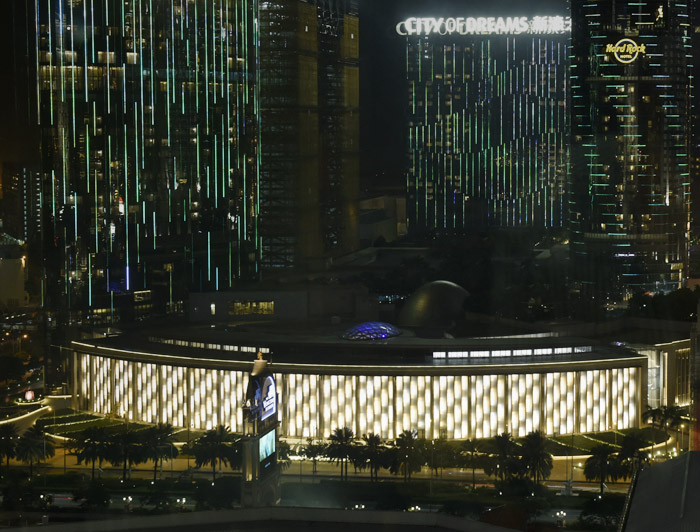 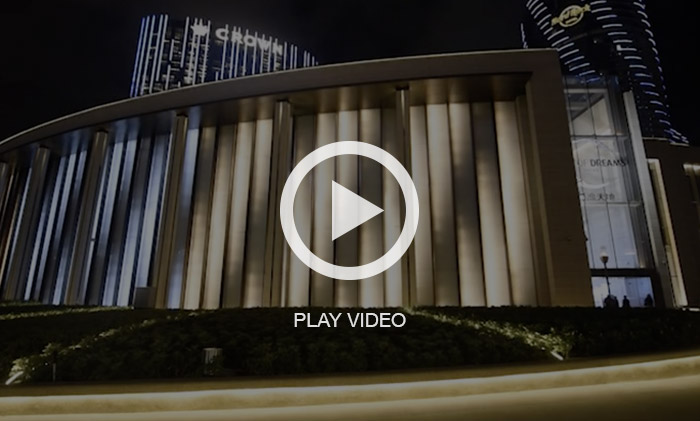 The new structure is dominated from the outside by a curving colonnade two hundred and fifty metres wide and twenty metres high. Behind the columns, the façade has been constructed using ninety tall light boxes. It was clear from the conception of this expansion that the lighting of this centrepiece would be the key to the success of the design as it dominates the streetscape it overlooks and directly faces the competition across the road, the sprawling Venetian hotel and casino. This lead to several cascading decisions; some animation of the lighting effect was required, the large colonnade would seem too monolithic without movement, and the movement needed to resemble ripples on water stimulated by a breeze.
RGB colour mixing was rejected at the outset because it does not sit well with the purpose of this building and there is already a great deal of colour on the Cotai Strip. illumination Physics proposed the use of a mix of very warm white and cool white. Very warm white resembles gold and by association makes the use of cool white resemble silver. This was the beginning of the metaphor.
The next step was to bring the concept to life and turn it into a practical and maintainable system. Our challenge was access. The light box dimensions and basic characteristics had already been determined and had acquired momentum prior to our input. In the event of a maintenance problem, it would be impossible to get access from the front or the back of the panels. This is a common problem in retail façade lighting in Asia and it is often the case that the practical LED ownership issues are not commonly understood during the architectural design.
Placing forward facing LED strips on the back pan was impractically and impossible to maintain so this idea was discarded in favour of a unique genre of illumination Physics products developed for the ‘Artwall’ light feature at the Marina Bay Sands in Singapore. illumination Physics created a linear luminaire in which two colours of LED were installed alternately along its length. The luminaire was installed vertically on one edge of the light box as a grazing wash light across the back pan of the light box. The critical design feature was that the focused angle of colour one was 20 degrees different from colour two, meaning that the two colours would come into focus at different places across the surface and it was possible to emphasize the far side or the nearest side to the luminaire or, by using both colours under dimming, create a transition from one colour to another.

There is a magic ingredient in this technique we keep to ourselves.
We now had a concept for City of Dreams and it was successfully tested in mock-ups. The aesthetics were essentially solved but the maintenance issues remained unsolved. We determined that the light fixture would contain no electronics at all, greatly simplifying the luminaire the way we do with all of our high temperature resistant ‘Gulf Spec’ luminaires. The drivers (electronics), would be remotely located on cat walks above the ceiling spaces where they could be easily accessed; the possibility of a technical issue with the luminaires themselves greatly reduced by their ultimate simplicity.

For the Marina Bay Sands project we designed a cassette into the mullion detail of the light boxes which could be removed from the outside, allowing access to the luminaires however, this was not an option at City of Dreams.
The luminaires would now be installed in a similar vertical row located at the mullion that separated one light box from the next. This solution was compact and optically it worked but the question remained: how could they be accessed for maintenance if the need arose?
To achieve vertical access, illumination Physics created a removable access panel in the back pans of the light boxes above the ceiling spaces. The luminaires were mounted in a custom ‘rail’ within which the light fixtures could slide up or down and a draw wire was attached to each one in addition to the low voltage cable. Should there ever be a failure it is now possible to remove the access panel and ‘fish’ the light fixtures out of the light box one by one and lower them back into position following repair. Numerous tests were performed and the rail system perfected; a highly unusual solution to a common lighting problem in retail façade architecture.
The installation of 1,500 illumination Physics Double Graze luminaires was completed as an integrated task within the façade build program. Our decade of experience with integrated façade lighting is of great benefit as our project managers can anticipate all of the issues associated with working within the façade construction process.
We had ample time to test prior to the opening because the internal fit-out necessarily lagged far behind the construction of the building envelope. Our original intention was to control each of the ninety light boxes as one object - a pixel containing very warm white and cool white, using just two DMX addresses to control sixteen pieces of illumination Physics Double Graze Linear. During the testing and commissioning stage we suggested to the client that we could greatly vary the programming of the lighting by taking individual control of each luminaire creating 16 pixels in each light box instead of just one. Since every luminaire had its own dedicated cable and driver output the change was made with a control system upgrade. Two dozen test programs that exploited the expanded horizons of creativity were produced so that the owner could participate in the process of content creation. Lawrence Ho is an expressive and decisive client. His vision was clearly delineated and a preferred pattern quickly emerged. 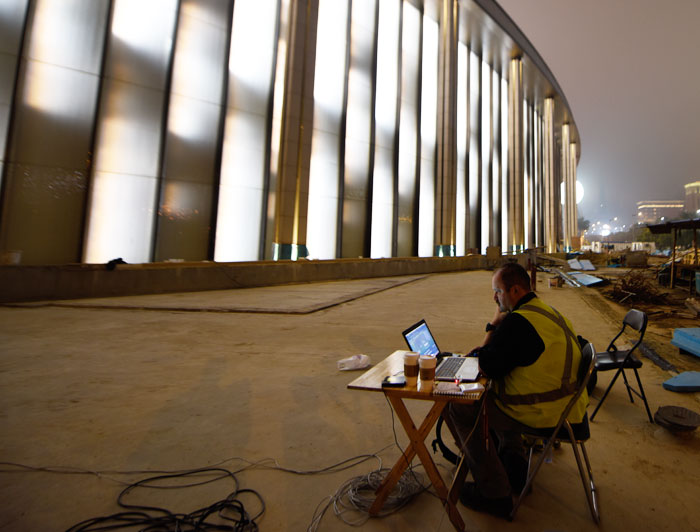 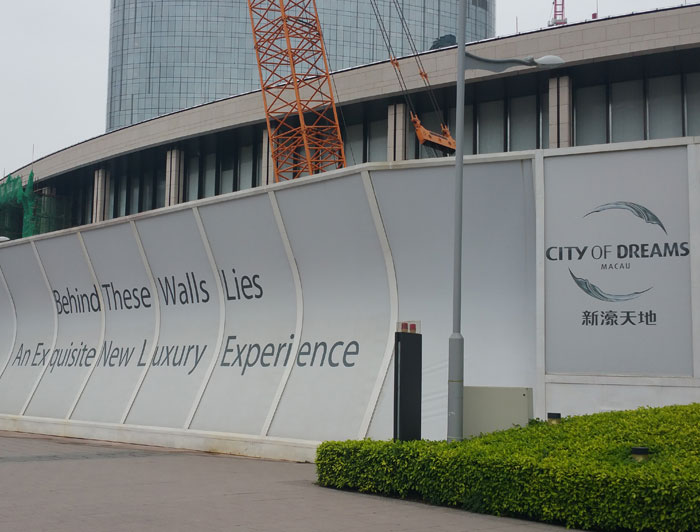 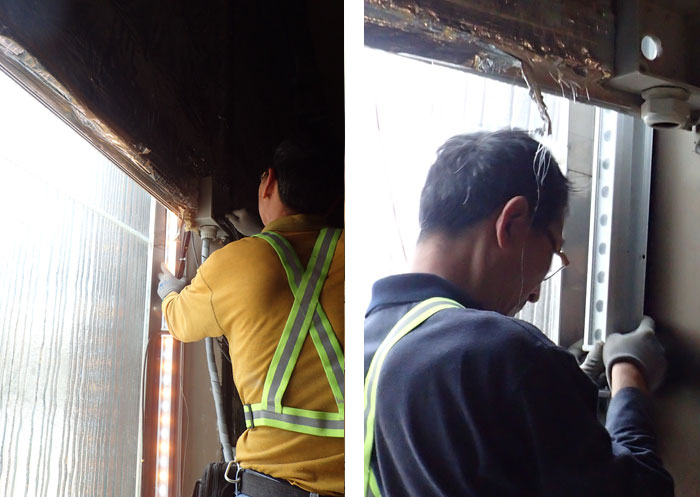 The result is a constantly changing façade in which the lighting patterns evolve organically from one animated scene to the next.
For control of the main façade we chose the LSC ‘Clarity PC’ providing overall control of the 1,440 fixtures distributed across 6 universes. Seven DMX Splitters were used to distribute data to the fixtures via Artnet. Artnet is converted into DMX 512 via an Artnet to DMX Converter. The patch has been configured to allow for conventional FX programming via a Pixel Map. Playback occurs nightly via the inbuilt scheduler that exists in LSC Clarity. Currently, there is a show with 3 sequences that is replayed every 30 minutes. In addition to the inbuilt schedule we also installed an xkey control panel allowing the operator to manually select preprogramed sequences as required. The system is protected via a UPS and there is remote access to the control system via Team Viewer.
The façade lighting was completed using just four other types of illumination Physics products.
Our IP65 rated CL180 LED downlights were used in large quantities at Melco-Crown’s other property on the Cotai Strip, Studio City. They were used just as effectively in the soffit of the main entrance at City of Dreams and avoided the need for other types of spares.
Each of the 17 square columns that comprise the colonnade have a full height rebate in each face which are illuminated at the top and bottom with illumination Physics’ compact CR80 mini wash light using the 10 watt 5 degree warm white version. 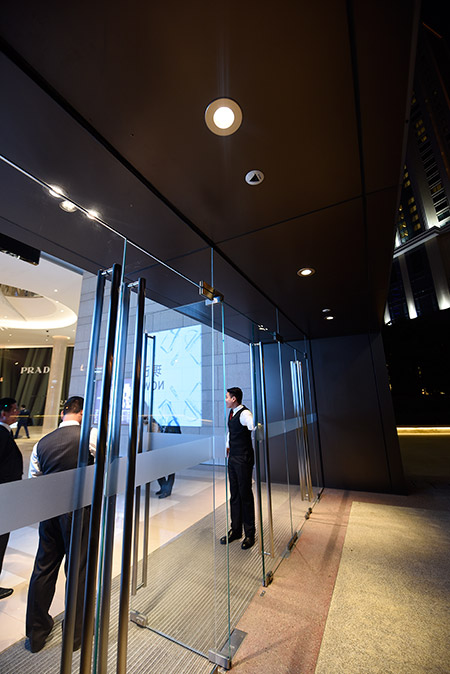 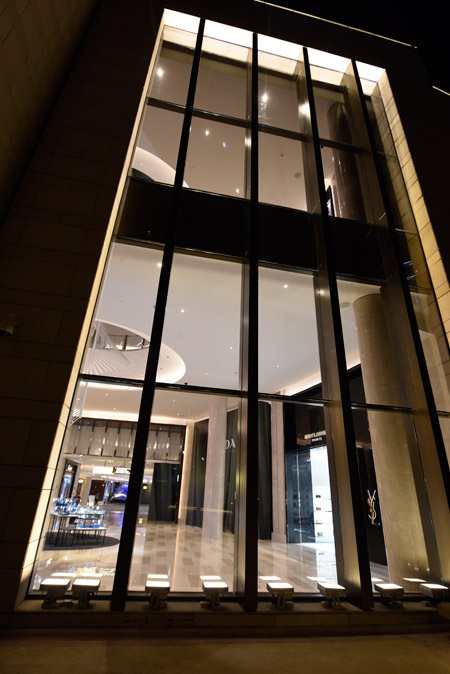 The colonnade supports a wide arch in which there is a horizontal rebate running the full width of the façade. This is illuminated using one of illumination Physics many ‘Rigid Series’ low power linear LED strip lights.
Lastly, the architectural language used for the light boxes in the grand colonnade continues on the other flank of the main entrance but here the panels are vision glass. The mullions and transoms are illuminated from the sills using a pair of illumination Physics IP Wash 48 wash lights fitted with two types of lenses to effectively cope with the optical requirements of such a long throw grazing specification. 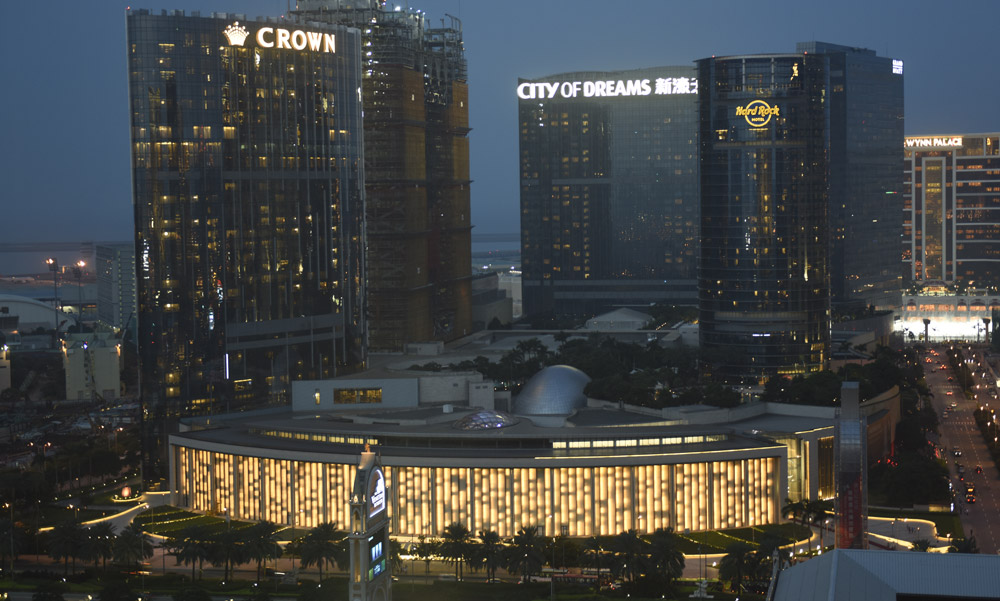 The Centrepiece is now complete – a vision in white. The City of Dreams façade lighting treatment is another step in the development of Macau’s nightscape. 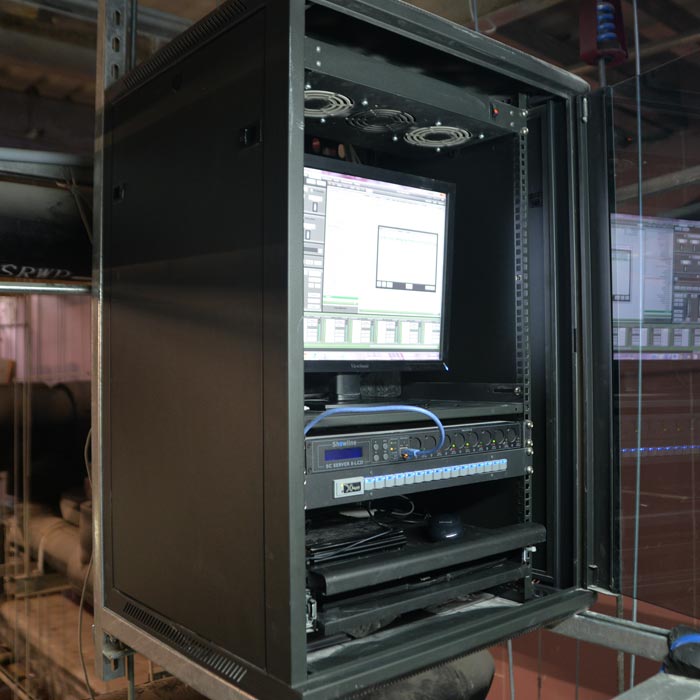 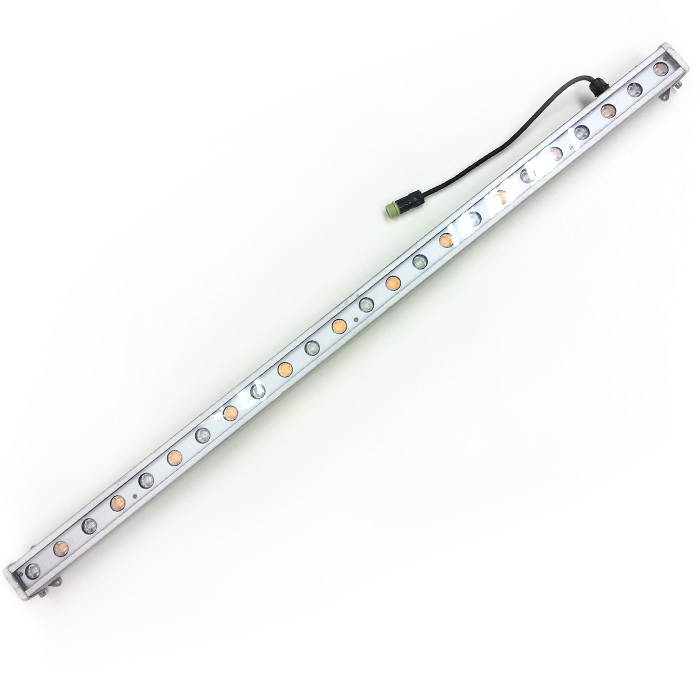 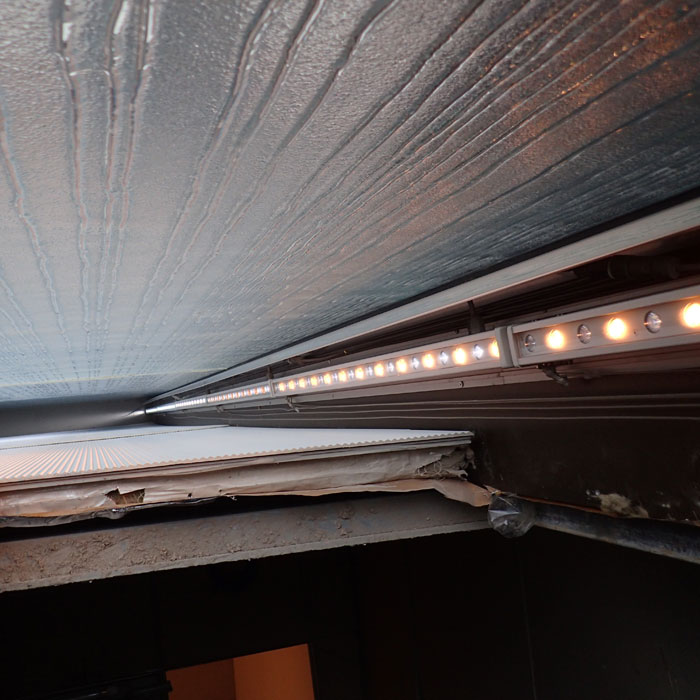 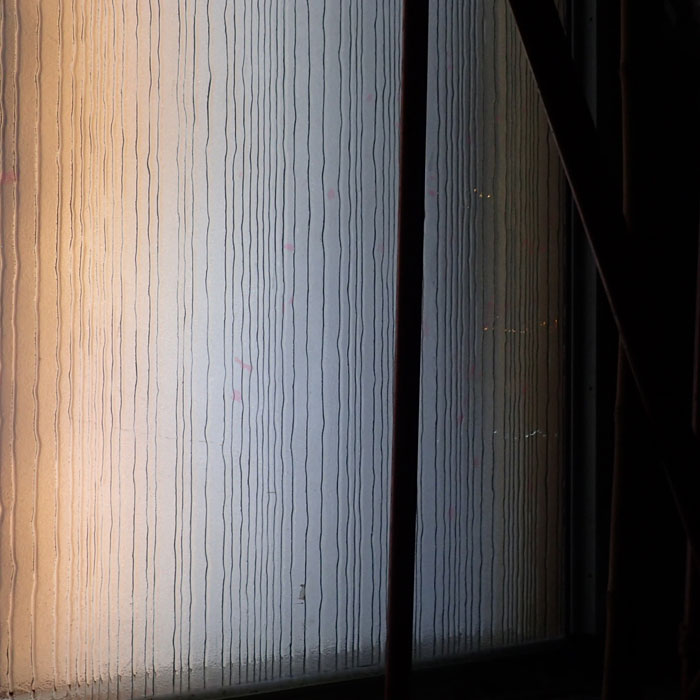 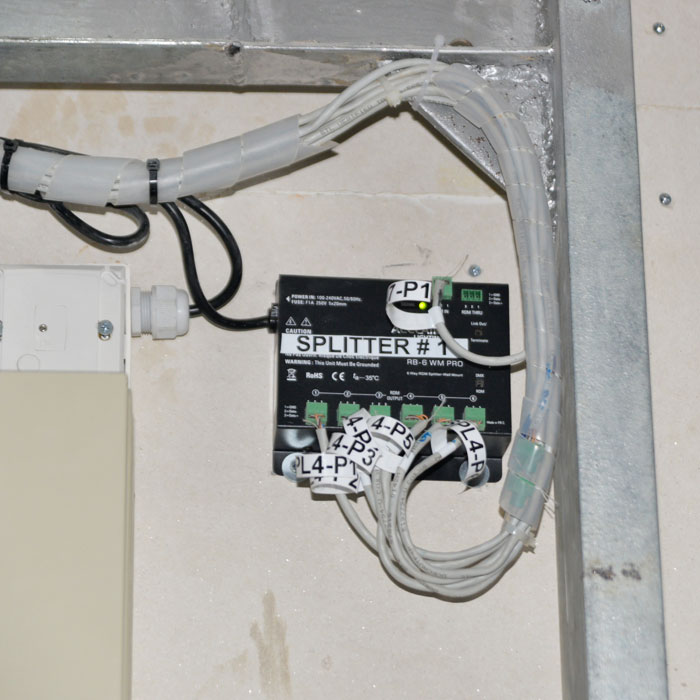