Aura is the latest creation of Andrew Walsh and his company Accolade. The new night-time attraction has been recreated using all of the latest digital technology, including, we are proud to say, more than eight hundred LED luminaires provided by illumination Physics.

Illumination Physics’ involvement in Aura was an evolution. The diggings’ is a large area containing recreations of not only the gold mines and miners’ tents but also buildings of the period; the Eureka Hotel, the story and period buildings which surround the centre of this theatrical set. The set exceeds two hundred metres in width and three hundred metres in depth. The entire area should be bathed in virtual moonlight at times, and vey specifically illuminated in parts at other times.

Simon McCartney managed the day-to-day design and manufacture of the luminaires at our factory while business Partner, Peter Kemp, had been the direct interface with the lighting design and technical issues from iPs Melbourne office, working closely with Rohan Thornton – the project lighting designer. 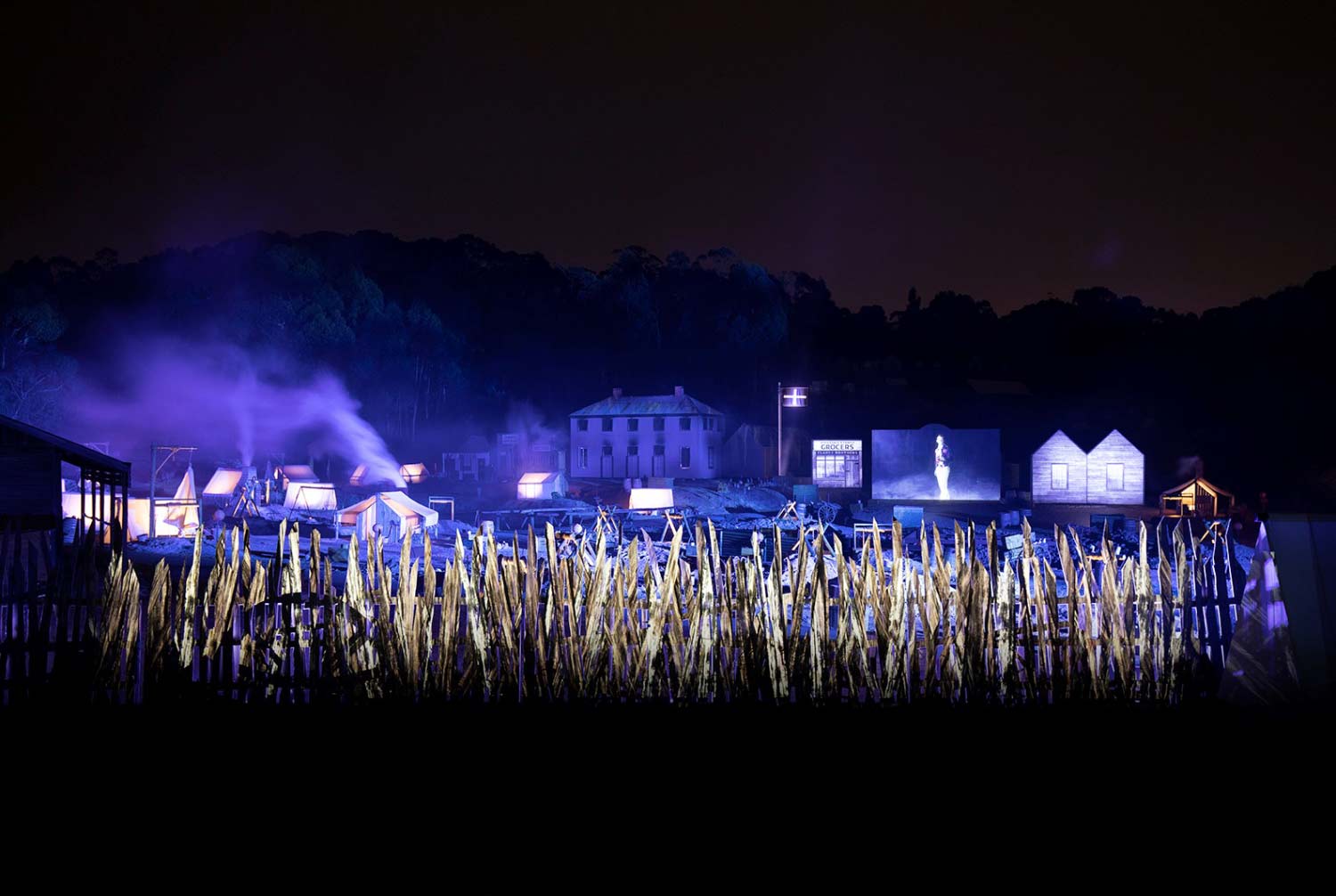 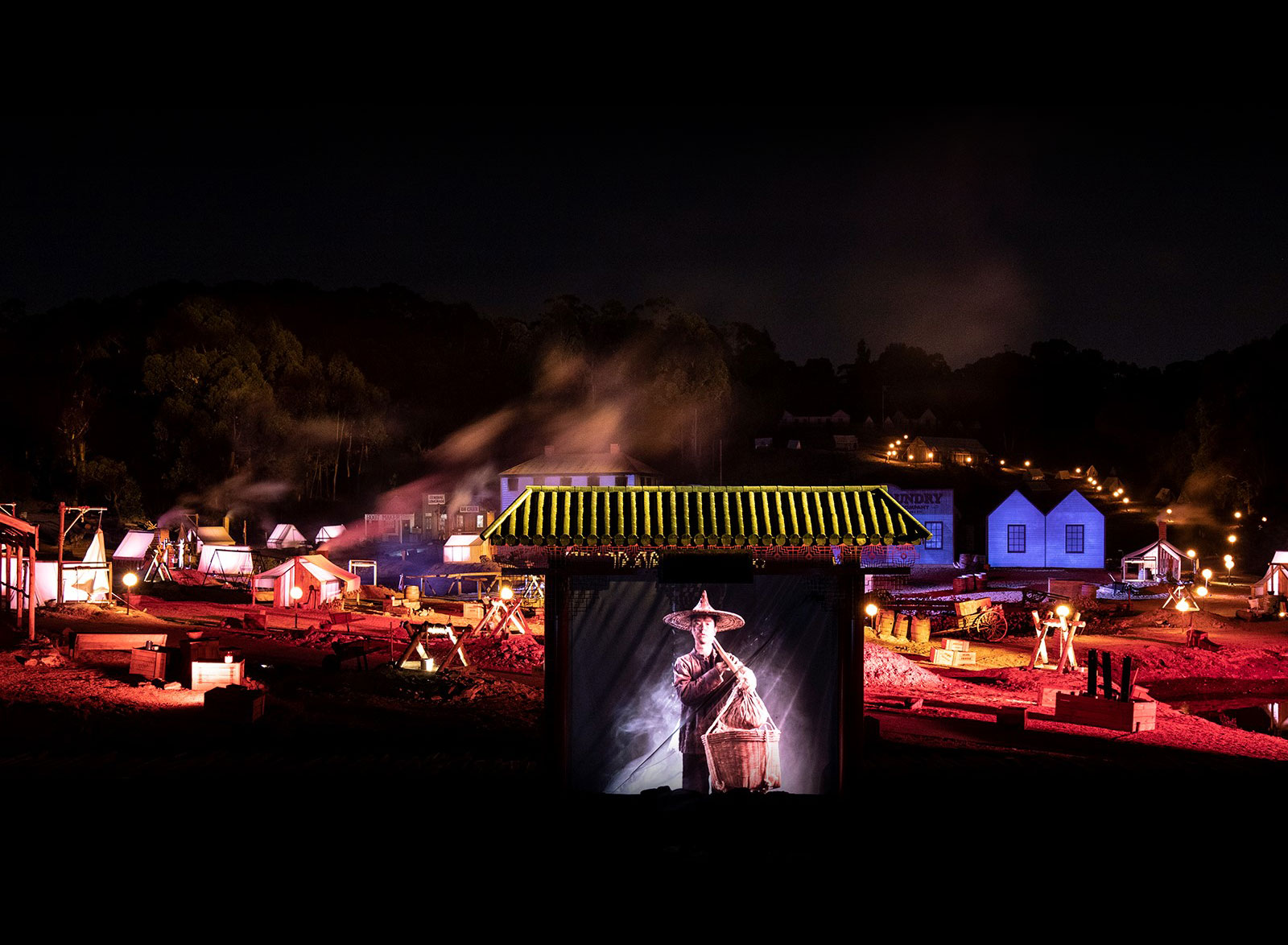 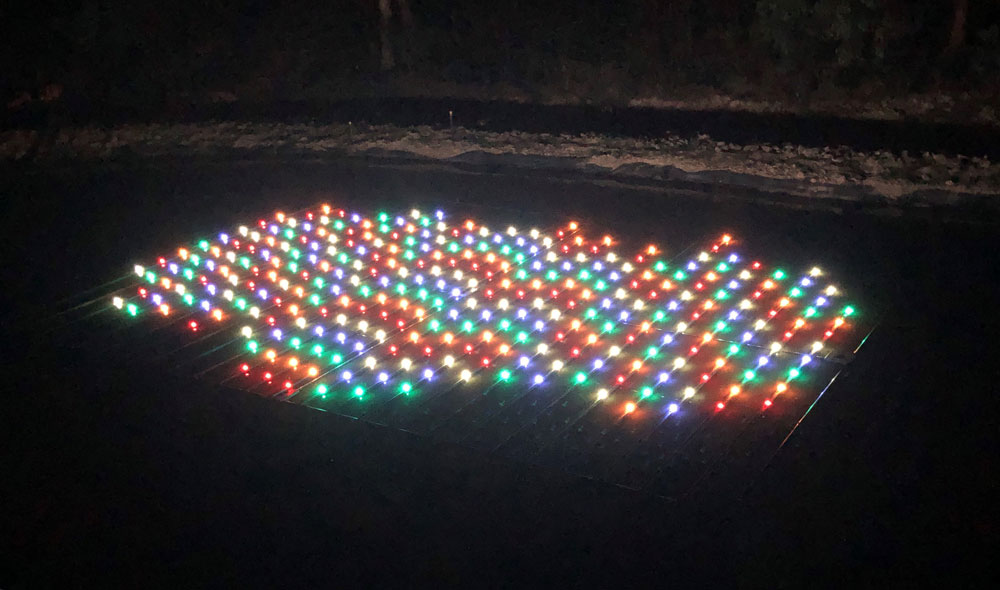 Limited choices in the attributes amongst the off the shelf imported lighting products in Australia was to be a limiting factor. However, illumination Physics is free of such limitations. Our philosophy is entirely focussed on the needs of the project at hand. We have four hundred LED base products to draw upon before we begin to create new custom products. Any of them can be modified in substantial ways to produce the precise result required for a single task.

As one would expect, the set of Aura contains the famous Eureka Stockade itself. In this case, the stockade is a motorised object; the stockade rises from where it has been hidden from view until it is required to appear magically. 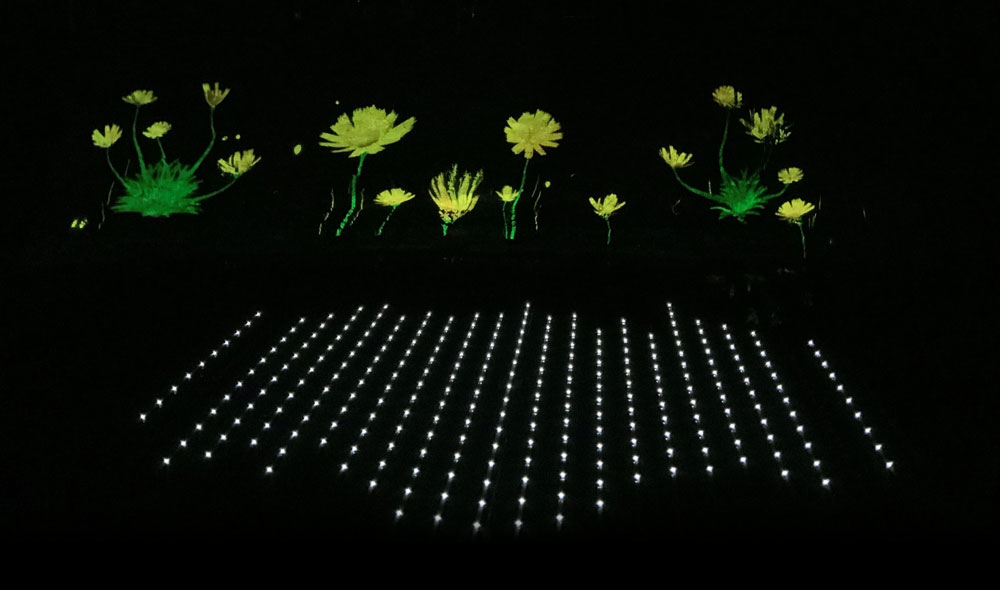 The audience finds themselves within the stockade as if they were with the miners trying to defend themselves. The stockade is illuminated with illumination Physics Rectangular Wash luminaires.

Wash lighting was just one task. As the audience arrives at the diggings, they are first directed to the outdoor theatre overlooking a body of specially created water. The performance here was to be comprised of projection sound plus a magical element of lighting located in the water itself. The concept of a floating matrix of programmable LED ‘Dreamtime Dots’ evolved. It was apparent that no existing product would do, so a new variant of the illumination Physics ‘Data Dot’ was designed.

In the 1850s, the use of fire was pervasive for cooking and illumination, and the set of Aura makes use of gas fires in open places where it’s practical to do so. In enclosed spaces, such as tents and other small inferred fire sites, a solution from illumination Physics was used pervasively. A custom version of the illumination Physics Data Dot was produced with only amber and red LEDs. Programmed approximately in DMX, they produce a convincing flickering fire. Various simulated fires are created on the set.

Aura tells the same famous history, but now with all technical eloquence of today’s digital media. Technology is just part of the puzzle: immediately and importantly, the audience gets a fresh look at a creative interpretation of the drama that surrounded the events of what became known as the Eureka Stockade. The drive to the diggings ends, and the audience are delivered firstly to an outdoor theatre which overlooks the small lake. Floating unseen in the lake is a matrix of LED pixels, the illumination Physics ‘Dreamtime Dots’ were customised for the project.

Hidden under the theatre is a powerful digital video projector. The display is a complete surprise when it happens. The far bank of the lake becomes a surface for projection, and the water becomes alive with sparkling lights that interact with the content of the video.

The audience are told the story of the traditional owners of this part of Australia, the Wawawurrung people. 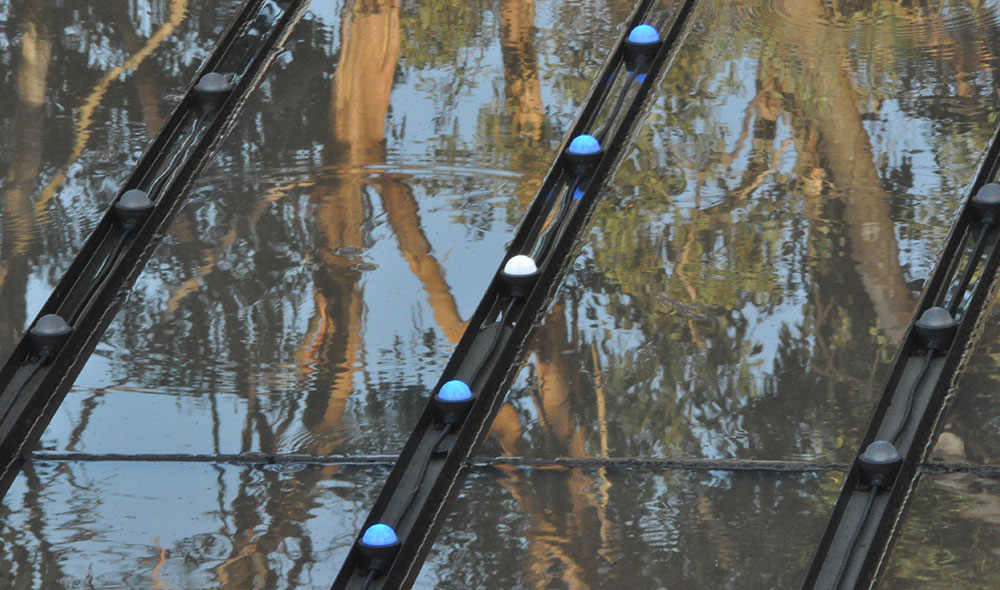 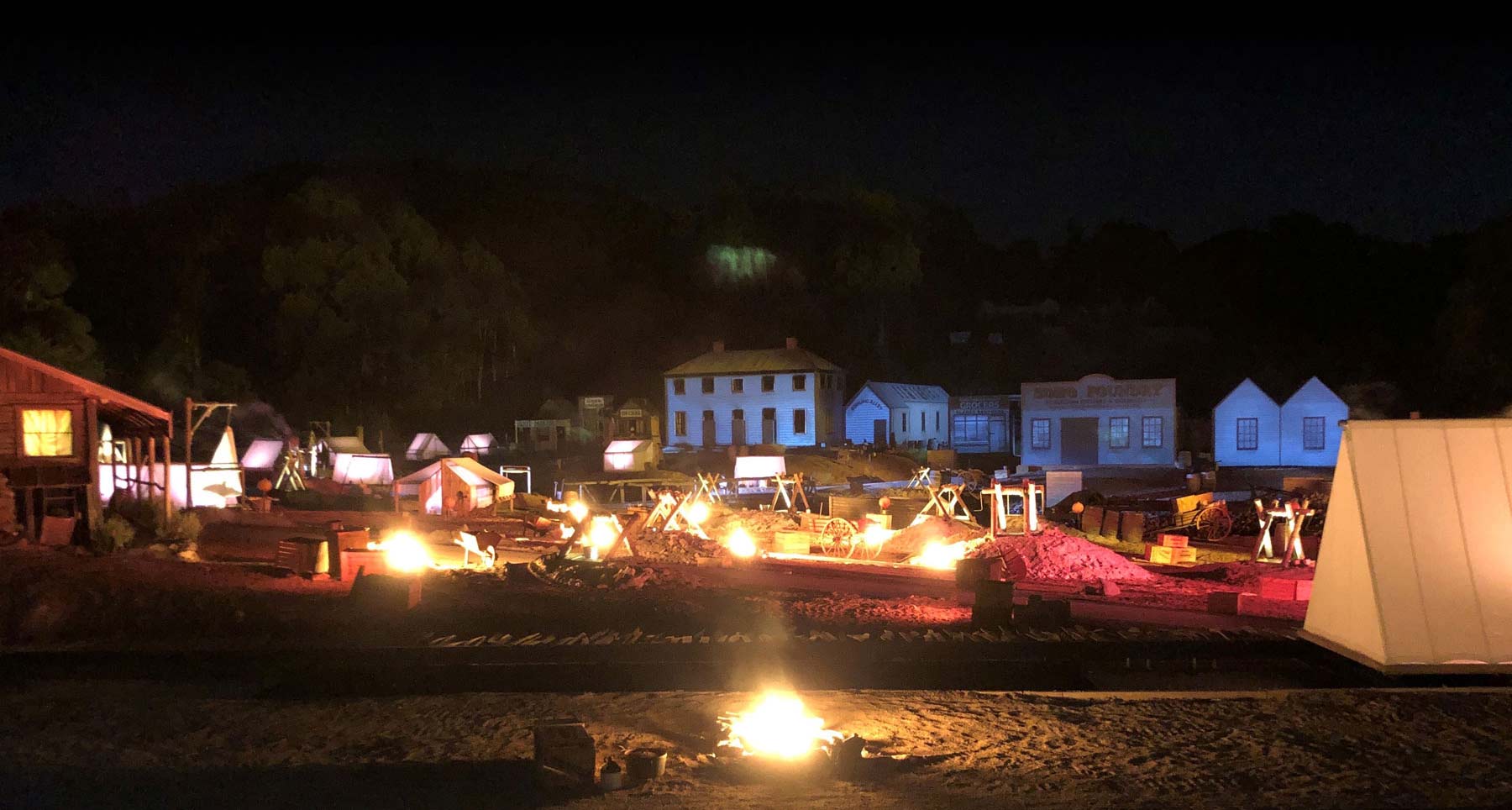 A few metres away is a recreated building of the period, the Golden Point Theatre. Although the front wall can open to allow the audience to see the ‘set’ which contains the diggings, the Eureka Hotel and other surprises, the theatre remains closed at first. The audience are ushered inside and seated, and the show begins with digital projection on the inside of the wall. The magic has begun, the scene is set, and the audience are now an audience of time travellers. The wall silently disappears, opening a view of the full width of the theatre and revealing the set for the first time. “My first impression is a view of great depth and scale.” Simon McCartney.

It is a dramatic night-time scene, bathed in LED moonlight; it is as though a day of mining has just come to a weary end.

Cooking fires are burning convincingly but created out of amber and red custom LED Data Dots illumination Physics made especially for this purpose. In other cases, the fire is real. The Eureka Hotel does catch fire later on, very convincingly.

Illumination Physics is proud to have provided architectural and landscape lighting as well as several special lighting effects. 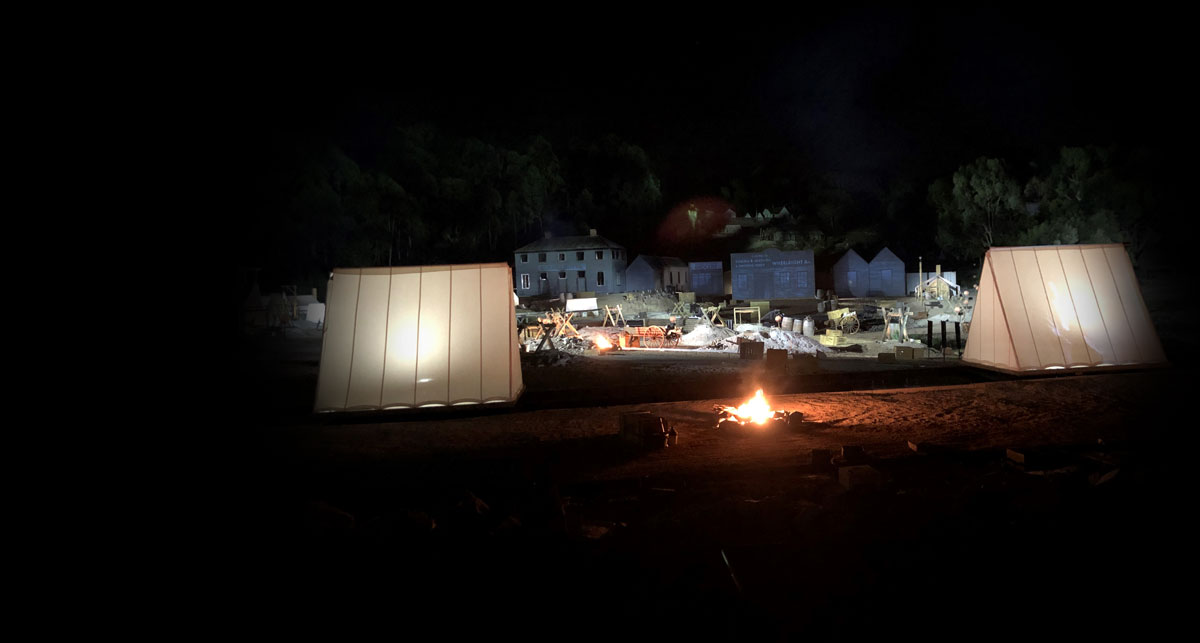 What ensues is a magnificent re-interpretation of a story that has been told at Sovereign Hill for 25 years. The latest technology has been applied generously, but it is the new creative treatment, the script, that drives the use of the digital illusions. Sovereign Hill has long held the reputation for showcasing the most prominent night-time attraction in Victoria. This is no longer appropriate. It now stands as a shining example of a world-class attraction. 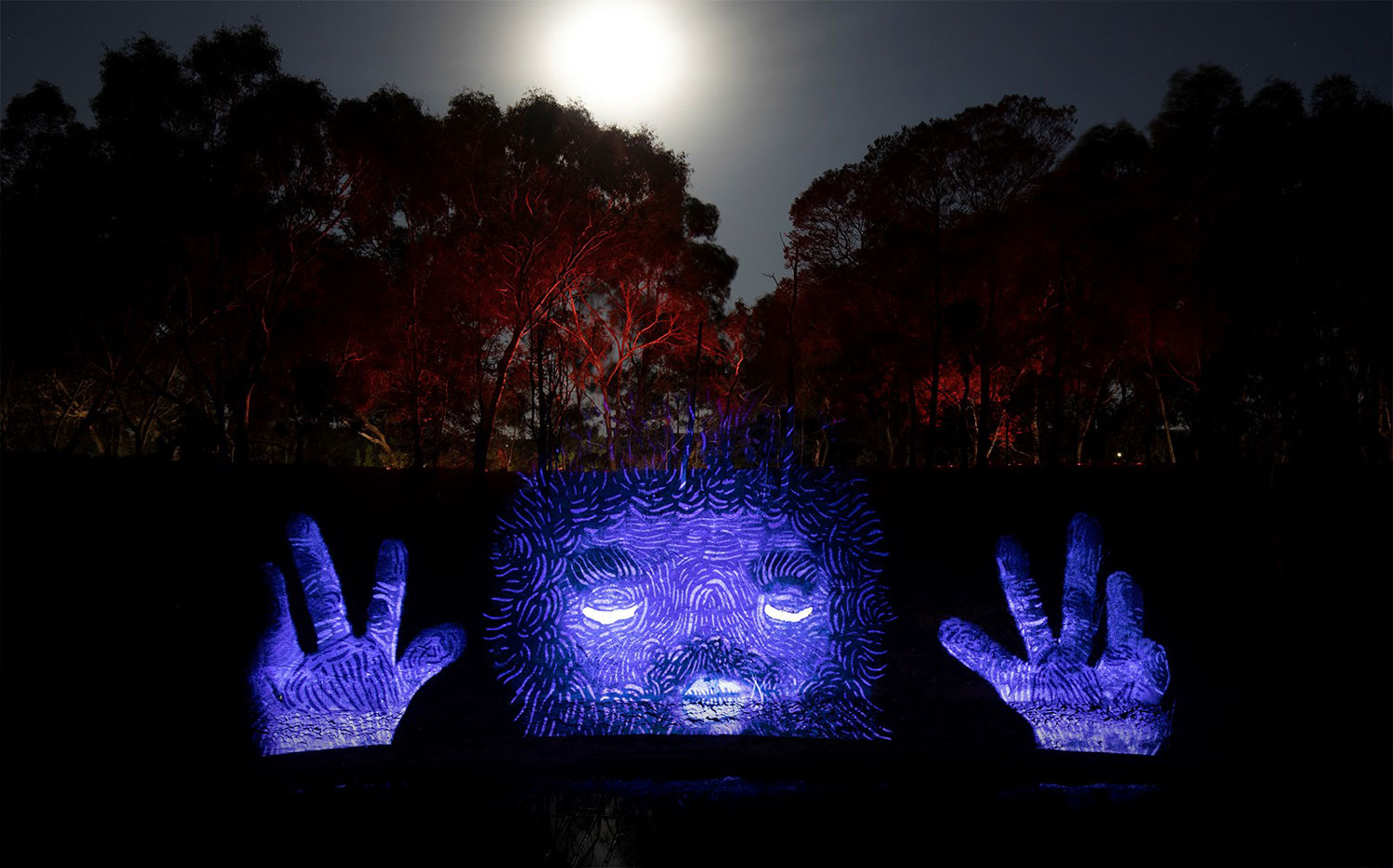