Form belies function and lighting defies belief… See how advanced architectural and illumination technologies seamlessly combined to emphasize the streamlined and wave-form design of this innovative and sustainable multi-purpose facility. A feat that could only be achieved by illumination Physics – the specialists in customised lighting.

Deriving inspiration from the ocean and hills of Deep Bay, the Hong Kong sludge treatment facility, known as T ▪ PARK, provides a distinct landmark along the north-west coast of Hong Kong. To the casual observer, it is difficult to guess what this building is used for. Gazing upon the extravagant architecture, one can be forgiven for mistaking it as an airport terminal, an up-market mall or as a high-tech factory.
The T stands for transformation and represents the city’s commitment to transforming waste into energy. When viewing the beautiful architecture it is obvious that no quality has been sacrificed. T ▪ PARKis a massive structure sprawling with purpose, formed in the shape of two huge rolling waves like the sea in front of the property, or if one prefers, two rolling mountains like the steep terrain behind. T ▪ PARK is a facility of Environmental Protection Department of HKSAR.
Given its millions of residents confined in a small land area, Hong Kong has an inevitable problem with sludge. To combat this issue, T ▪ PARKwas built as a leading edge technical facility that uses extreme temperature incineration to dispose of most of the final distillation of human leavings. Vasconi Architects have created a grand illusion which is enacted by the brilliant form of the hard and soft architecture. The building looks like anything other than what it actually is! Form belies function.
Every effort to improve the environmental outcome can be seen in the design; the form of the building, the green roof and the re-created Grebe habitat (wetlands and the ecological gardens with a diverse range of vegetation). This sustainability theme is continued inside – T ▪ PARK produces its own electricity and recycles its water.
Magnificent!

illumination Physics was the design/build contractor for the client Veolia-Leighton-John Holland Joint Venture, and was honored to be tasked with the lighting of all the outdoor areas including special façade lighting, landscape, the Environmental Education Centre (EEC) for visitors and all of the general purpose lighting for the internal roads and access pathways.
illumination Physics devised the final lighting specification and created a predictive lux level study for all of the external areas using Dialux software. Our company also designed and manufactured all of the LED light fixtures that were used in the project.
The landscape and the EEC required a gentle touch. Lighting without glare whilst meeting acceptable minimum lux levels with the least amount of energy use is a common situational brief. The way-finding pathway lights are solar powered and self-contained.

The general purpose lighting proved to be quite interesting because the main views of the facility are from the north looking southwards either from the landscaped areas or the EEC. There is an access road that runs the full width of the plant separating the public viewing areas from the view of the facility and the road needed to be illuminated to a lux level that met code. Simply putting road lights on poles would have been aesthetically unpleasant as it would have introduced sources of glare between the viewer and the facility. The solution was custom designed in the form of a low level linear wash light that ‘grazed’ the surface from a shallow angle, placed 400mm above the plane of the road surface. A glare shield was attached to the upper edge of the fixtures to prevent drivers on the access road seeing the light source. 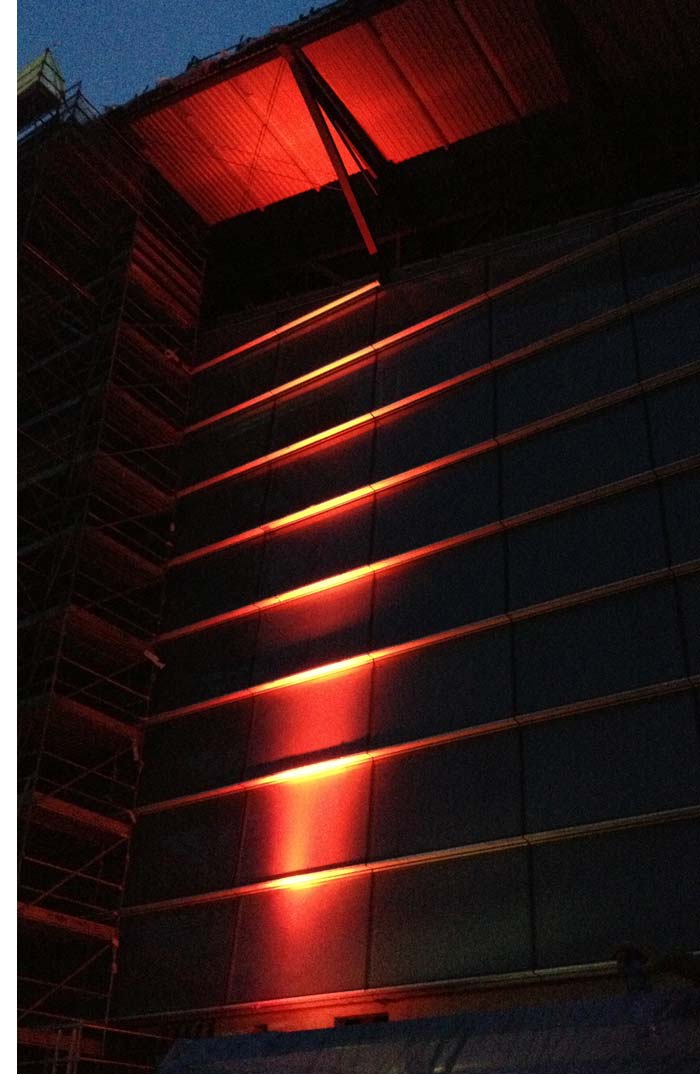 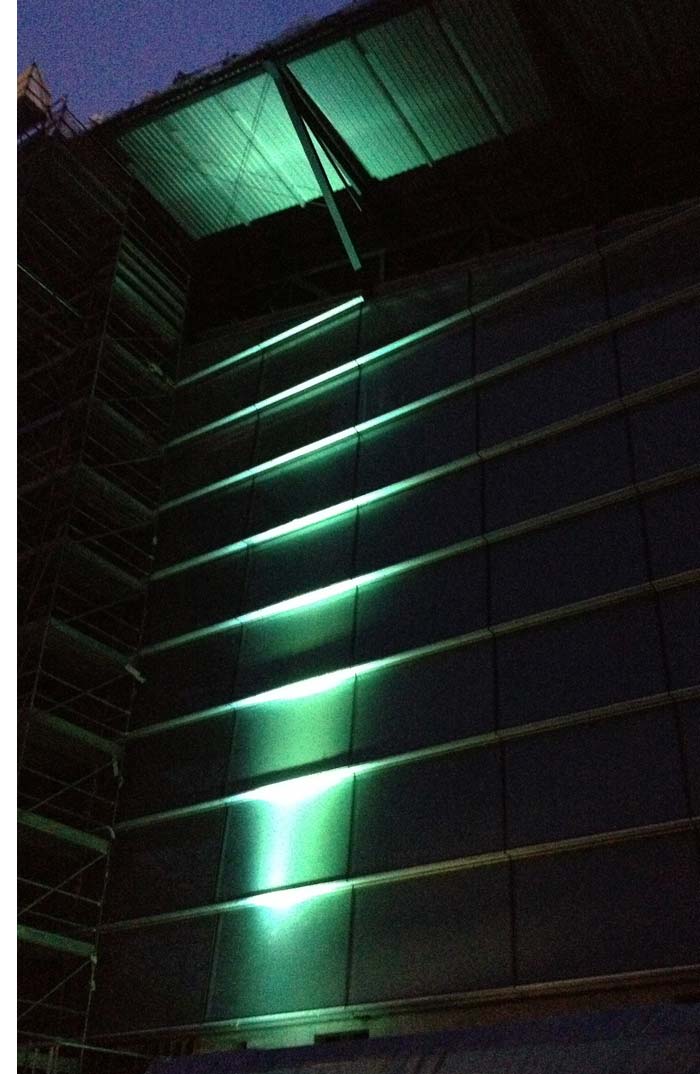 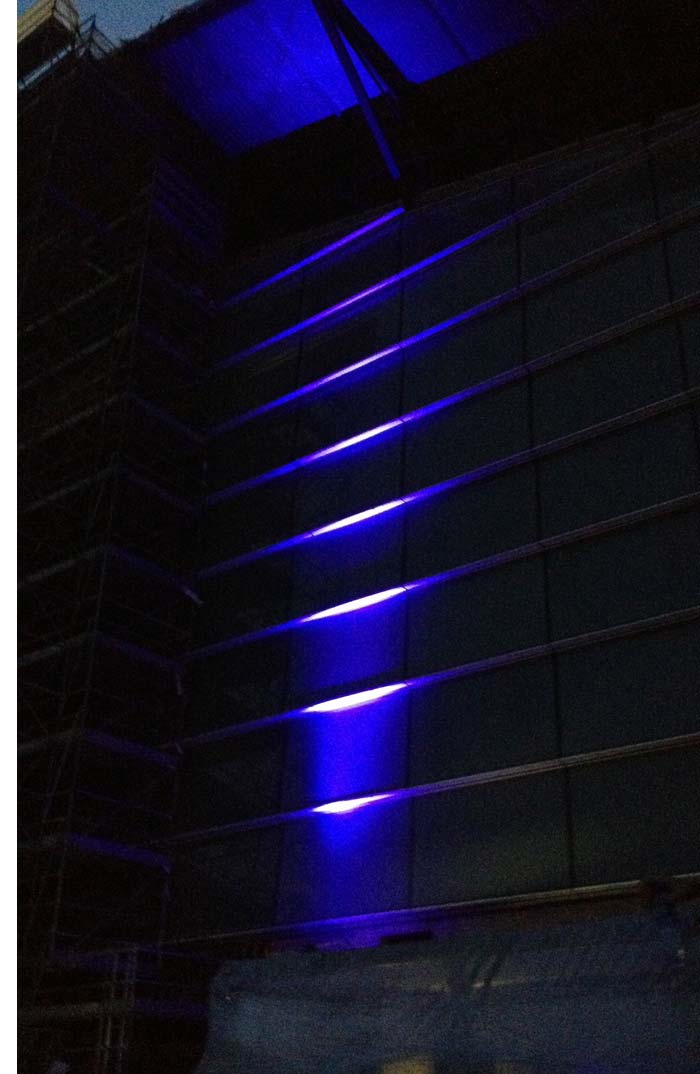 The special façade lighting was always intended as part of the grand statement. The northern façades of the spectacular plant building faces the EEC as well as the nearest port in the People’s Republic of China across the water. It is here that the greatest spectacle has been created.

The profile of the building reflects a 400 metre long double wave with a vertical accent in-between crest. The special façade lighting follows this shape precisely. A derivative art form, the architectural lighting traces the edge of the structure with lines of light, beautifully emphasising the form at night.

illumination Physics has long produced a linear direct-view RGB light strip for this purpose; IP Bar. Using this fixture was ideal for many reasons. It enabled the illumination Physics team to run the fixture along the ‘rolling wave’ roofline as it can be linked in series. Additionally, as the opportunities to install power and data were limited and difficult to access on this project, the benefits of this fixture’s on-board power supply makes IP Bar the most cost-effective choice.

Below the roof line of the plant buildings, the northern façade is constructed from a stylish glass curtain wall of overlapping clear glass panels. This is the second most significant feature of the structure.

The curtain wall is illuminated from below with the IP Wash 36, an RGB LED luminaire with 10 degree lenses installed. The crystalline form of the overlapping semi-transparent wall illuminates best by up-lighting because the incident light registers well on the soffits of each layer of panels as well as the roof overhang, 40 metres above. 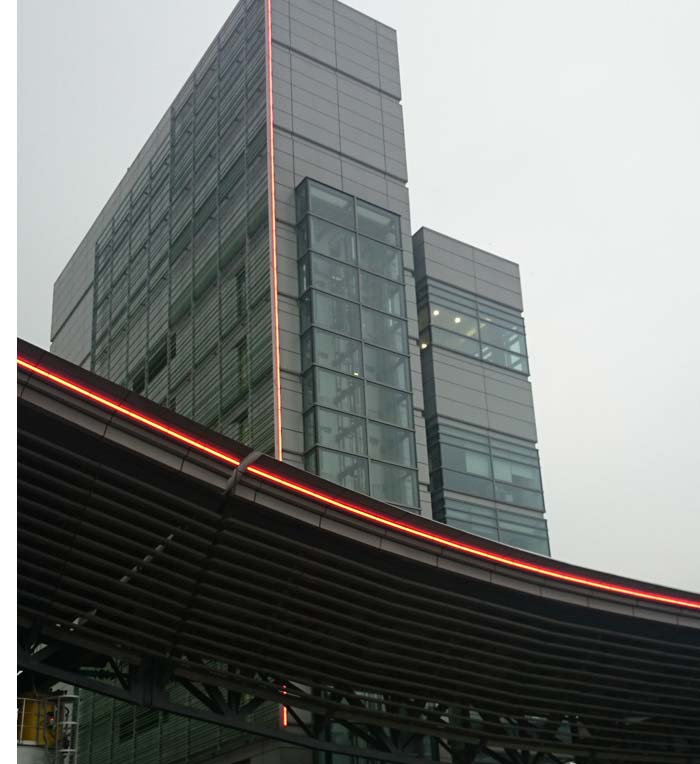 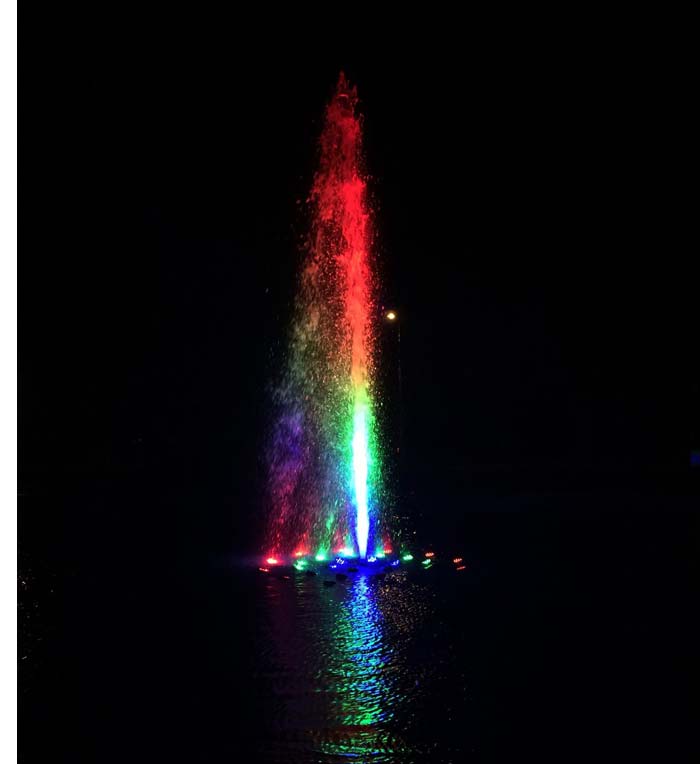 The use of narrow lenses enabled illumination Physics to produce a focus that spanned the full height of the façade. Two hundred and forty luminaires were concealed in bull nosed housing at the foot of the wall. This lighting plot was the second element of a display intended to suggest breaking sea waves. Combined with the IP Bar (which has graphic display capabilities), the up-lights complete an illusion of the ocean in a synchronised animated display.

One last feature remained to be added to the display element of the lighting of T ▪ PARK. In the foreground of the facility is a formal garden of soft and hard landscape containing decorative pools of fresh water produced on site. The largest of these contains a powerful single fountain jet capable of propelling water up to 20 metres in height. The jet is surrounded by three concentric rings of illumination Physics underwater lights, each with 36 Rebel LEDs.

illumination Physics designed and installed the control system that synchronises the three special lighting elements into a coordinated display that is the highlight view of the building come nightfall. This evocative display leaves an enduring memory for the students and citizen visitors that come to the site to learn about the environmental technology therein.

Because of the extreme density of the population in Hong Kong and the tremendous strain on landfill space for waste disposal, T ▪ PARK is a crucial step in leading the way on sustainable waste management. The technology and the acceptance of the inevitability of it should speak for itself but in reality, perceptions are everything and the form and lighting of the form of T ▪ PARK are crucial to the sense of arrival of anybody viewing the facility for the first time. 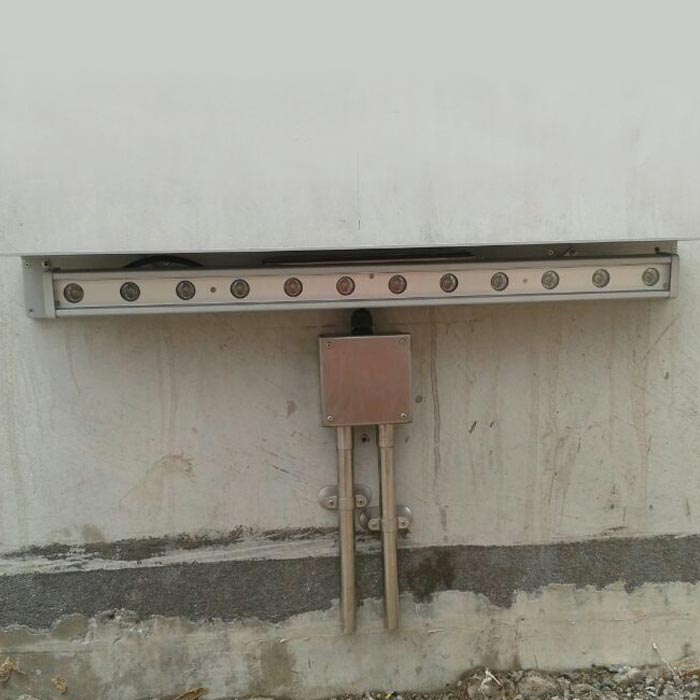 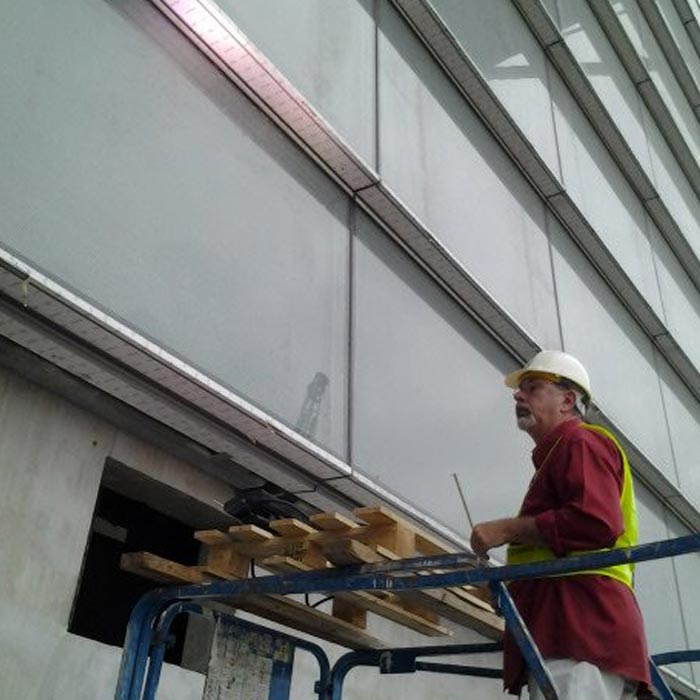 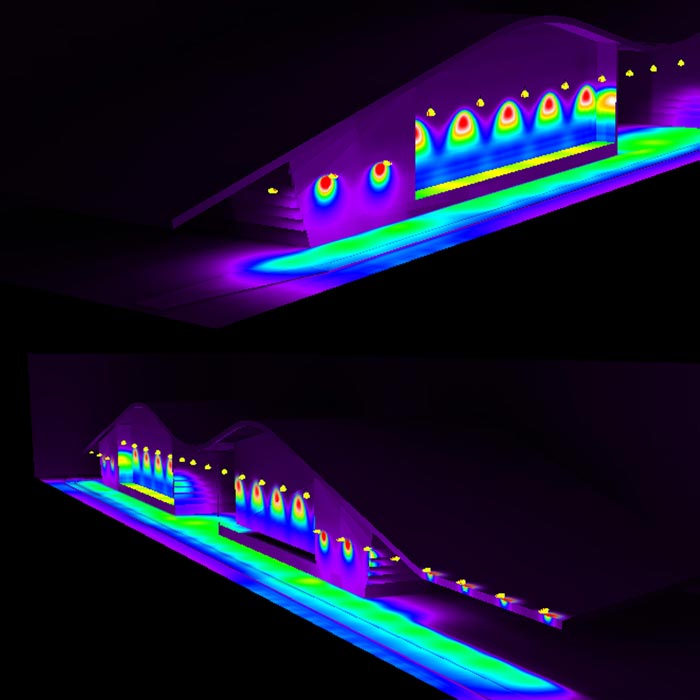 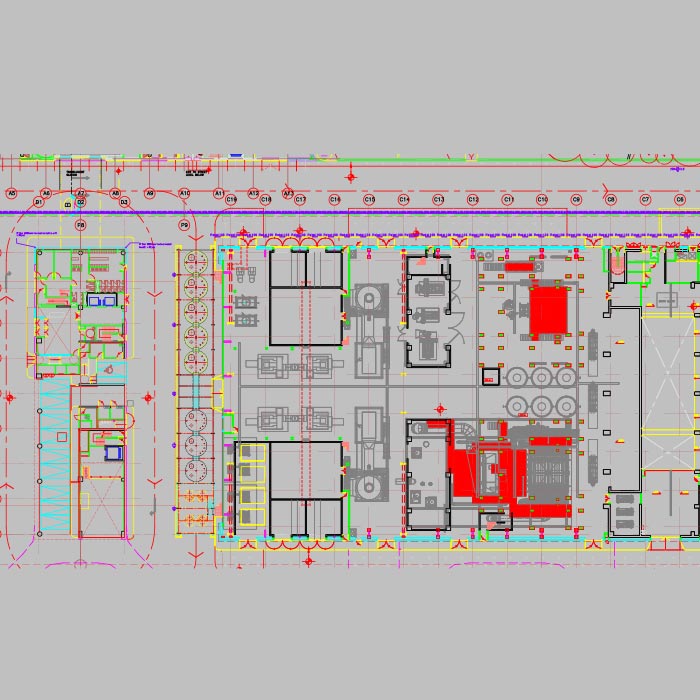 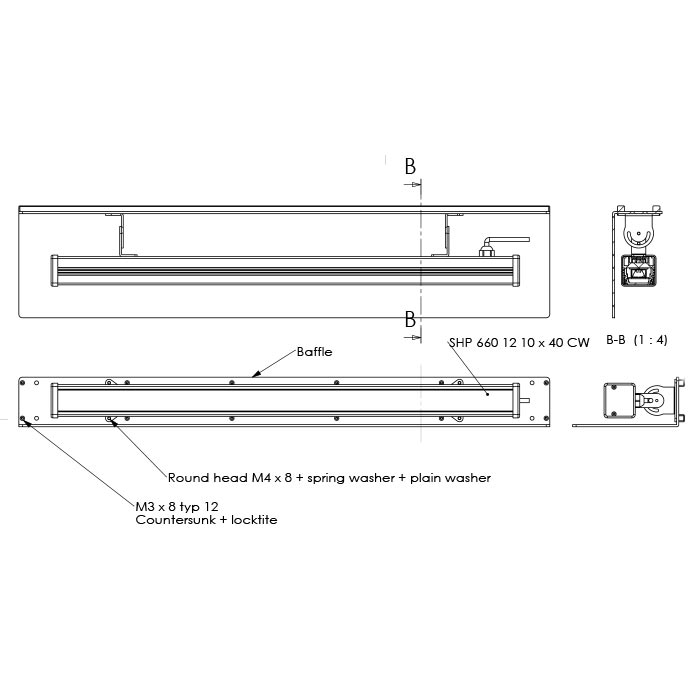