Illumination Physics is famous for integrated façade lighting, however that is not all we do. Radisson Blu Hotel's Chandelier in Cyprus shows a different side of our activities, albeit with the same focus of project specific custom design.

The Radisson Blu Hotel opened its doors to the public in October 2018. One of the new breed of hospitality venues in the rapidly expanding Cypriot leisure market, this Radisson is actually the first business hotel set in an evolving economy. The influx of ex-patriot investment and the opening of casinos in Cyprus for the first time has created an exciting but competitive market in which the developers must make strong visual statements if they are to stand out in the rapidly changing business landscape.

The Radisson Blu is illuminated externally with dynamic lighting by illumination Physics to draw guests’ attention, as the sense of arrival is critical to their experience. Like most modern hotels, the Radisson Blu has an integrated shopping mall. To succeed, this mall needed a point of difference, both in spectacle and personality.

A big statement was required.

Therein lay the genesis of the grand chandelier that was conceived of by local architects Fluid Design and Cypriot lighting designers Archtube.

Grand in concept and dimension, the chandelier occupies five hundred square metres in two vast displays that occupy the entire ceiling of the mall, surrounding the elevator core and, in turn, surrounded by the retail hub.

Bold in vision, the chandelier is comprised of pendant polished hardwood elements protruding downwardly from the plane of the ceiling in five variable lengths from 0.3 metres to 1.1 metres. The display is comprised of groups of 16 pendants which are repeated. Approximately 10% of the pendants are self-illuminated rods of light in lengths of 700mm lit and 700mm lit + 400mm unlit, specially created for the project by illumination Physics. There are 4,032 pendants in total descending out of a matt black sky.

Since the geometric design of the chandelier was set, the challenge was to design and manufacture the illuminated pendants. 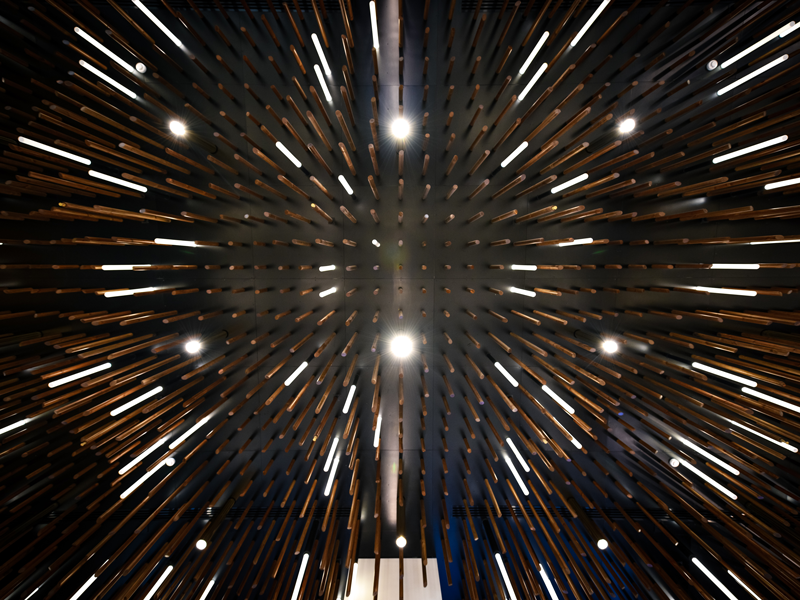 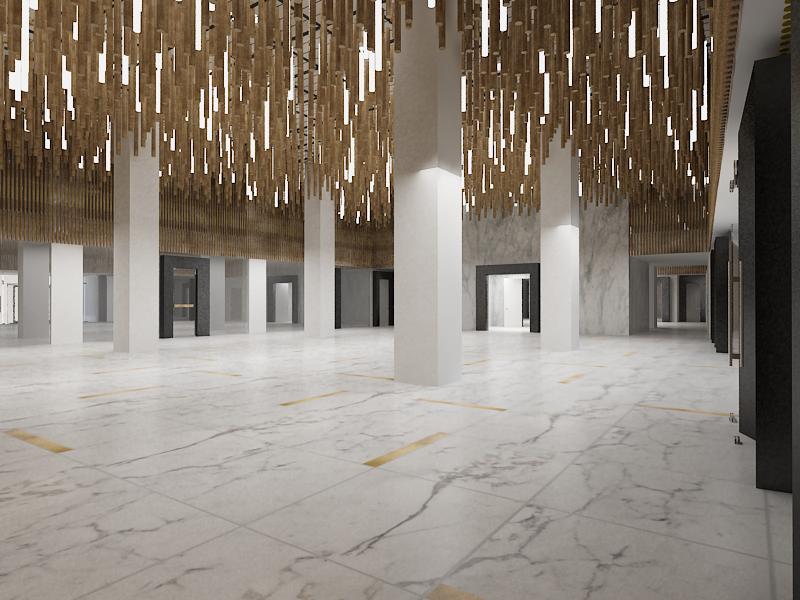 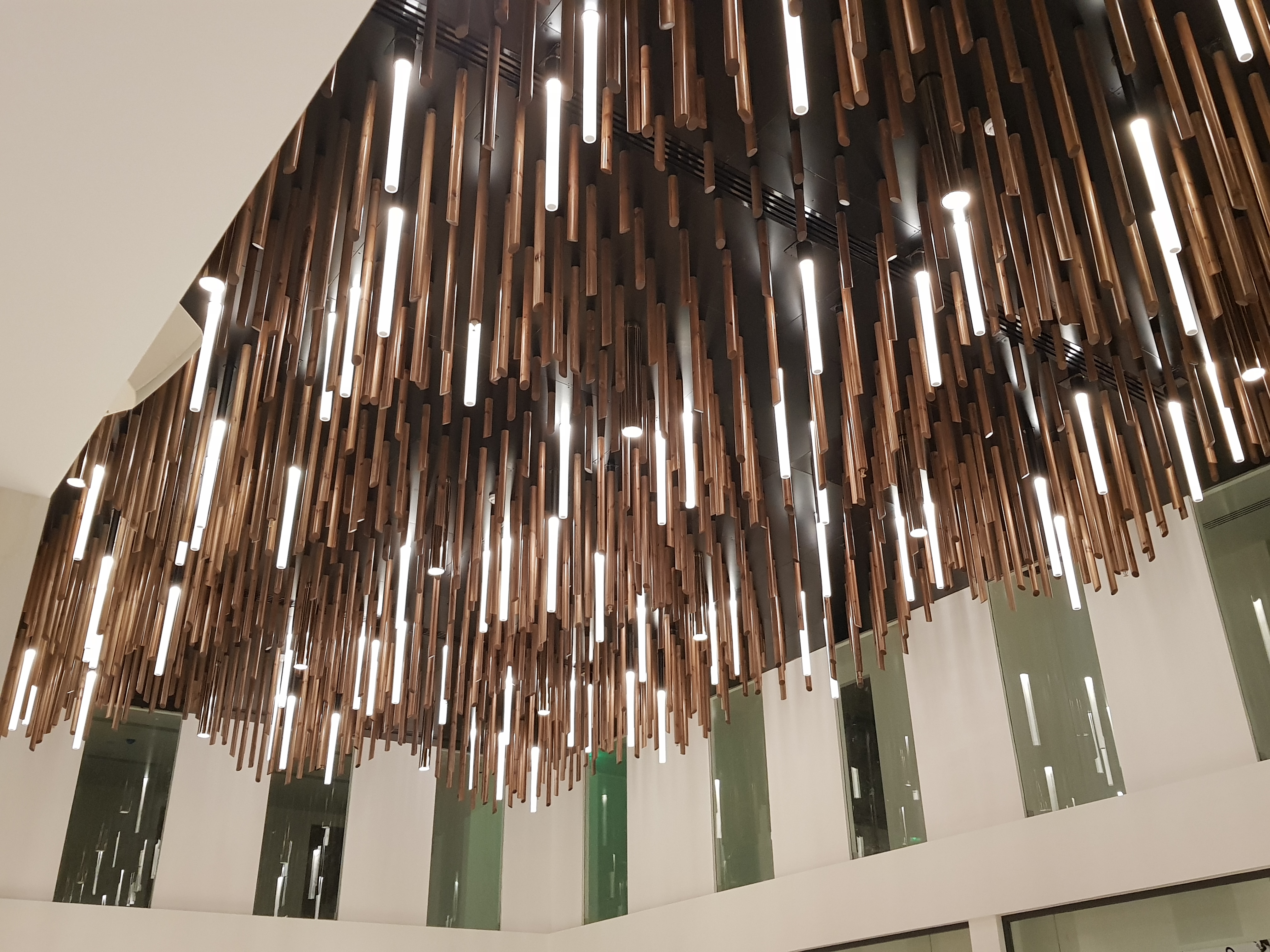 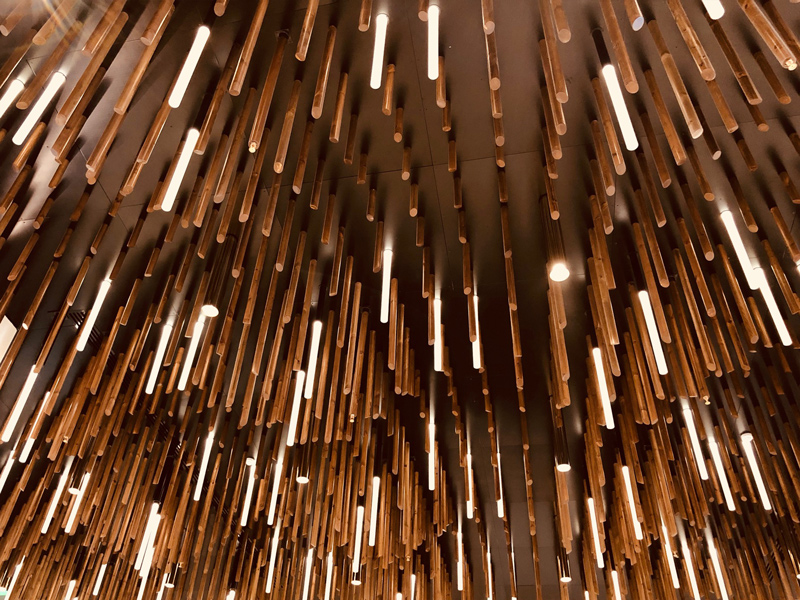 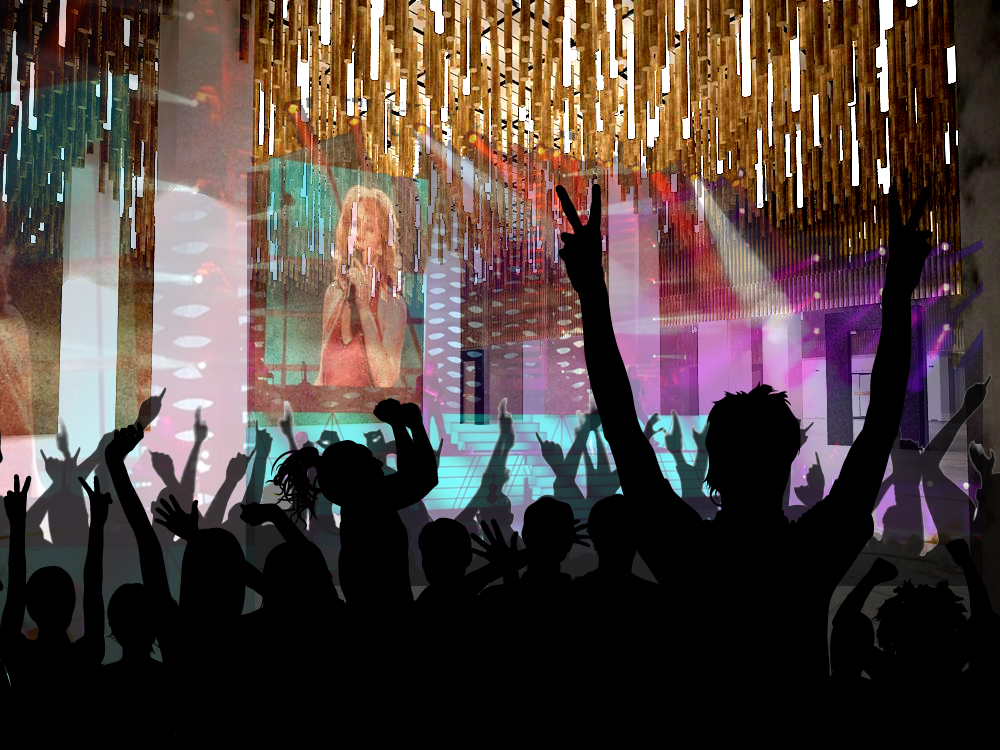 An artist’s impression of the grand Chandelier for Radisson Blu. 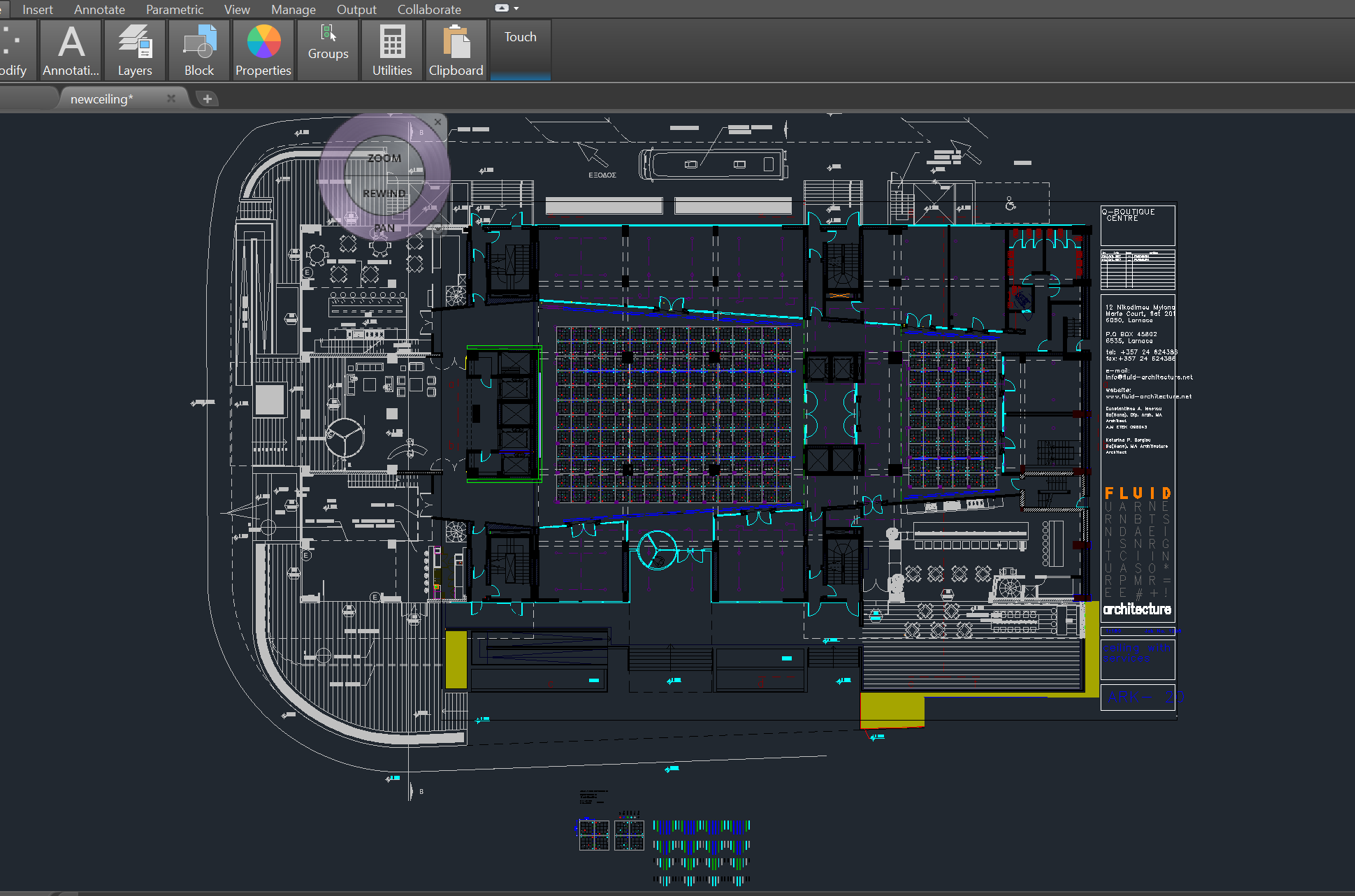 The celling plan for the Grand Chandelier in the centre of the mall.

Our challenge was to design the pendants so that their elegance and function befitted their purpose. To meet the challenge, we proposed the following:

With regards to drivers and dimming, there were several options that were discussed. Most simply, it could be possible just to switch it on and off but this was quickly rejected; we proved that the incremental cost of adding dynamic control was not significant.

It was also possible to dim the whole chandelier as one channel of control, but this option was not much better.

The most elegant solution presented itself to us, namely that we could create 63 groups of fixtures and have individual dimming control over each group. Further, illuminated pendants could be allocated to these groups in such a way so that a sea of slow motion could be created – this option is what we eventually selected.

With regard to the driver protocol, the client requested DALI to interface them with their in-house KNX control system.

The first task was to get the optical design and illuminator working perfectly.

Since the illuminated pendant must provide a perfect shadowless view from any angle, the only way to achieve this was to illuminate the 50mm cylinder axially using a single point of illumination. This could only be done from the top end of the pendant so that the light source could be completely concealed either within the non-illuminated section of the pendant or above the plane of the ceiling. A variety of diffused polycarbonate cylinders were trialled with different light sources.

It became apparent that none of the commercially available lenses would be good enough so a custom composite optic was designed for the project. This was crucial because we needed to manage the gradient of intensity precisely. We specified an obvious gradient but with maximum and minimum levels of luminance. The LED lens was designed to interact with a reflector which closed the lower end of the tube. 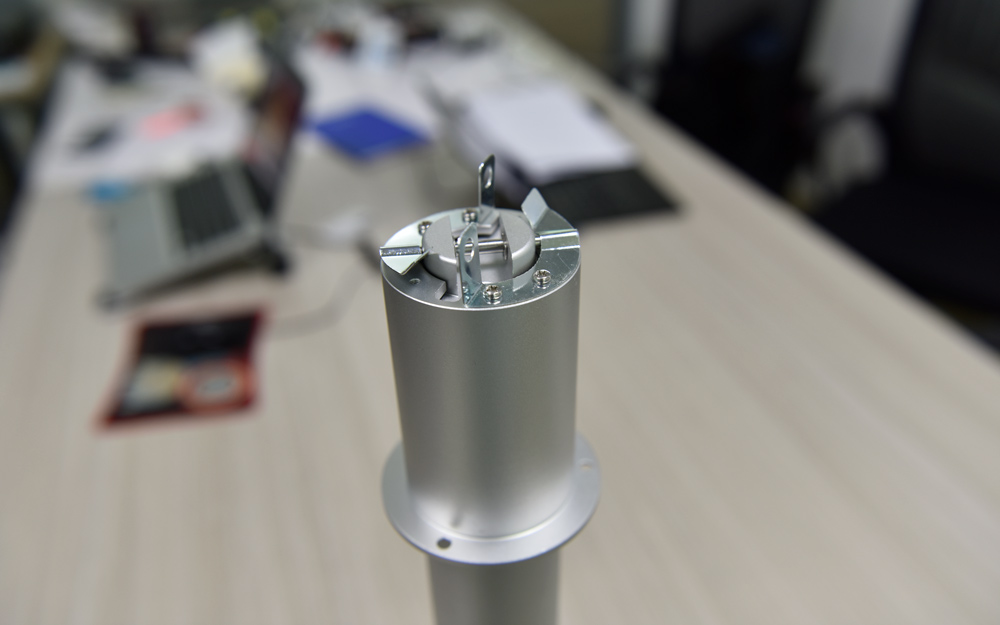 The final production model with the pendant engaged. 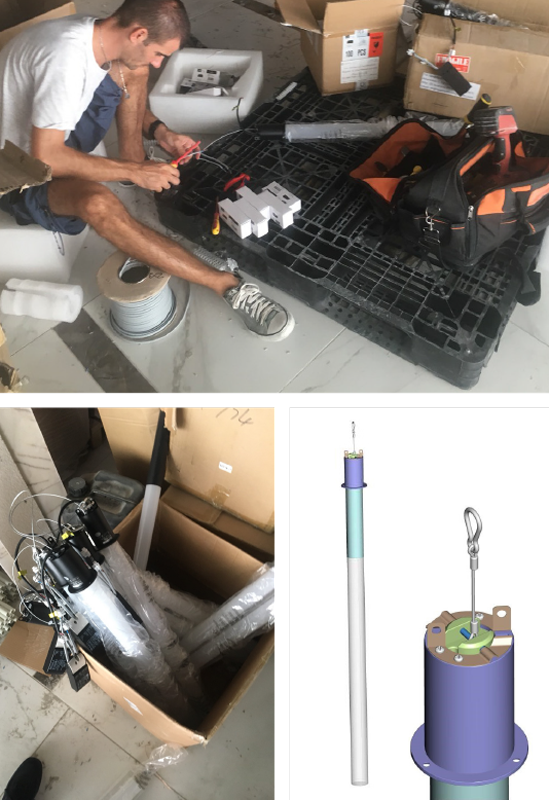 Pictured bottom-right: A development drawing of the pendant type with both illuminated and non-illuminated sections.

With the aesthetics solved, we moved on to practical issues.

Complex yet totally practical, maintenance for function is simple, and cleaning (always a challenge with chandeliers) is facilitated by the bayonet mount that allows a pendant to be taken down in seconds. The downlights that augment the overall lighting level in the mall are neatly concealed amongst the forest.

The space above the ceiling would be inaccessible. The only access for maintenance and cleaning would be from below. A simple way of taking down a pendant down was important; no tools should be required. We designed a bayonet attachment system reminiscent of a big incandescent light bulb. A special socket was fixed in the soffit into which the pendant was inserted and rotated 90 degrees to lock it in position – a smart and smart looking solution. For safety, we added a safety lanyard as one might in the entertainment or architectural lighting industry so that it is impossible to accidentally drop a light fixture. 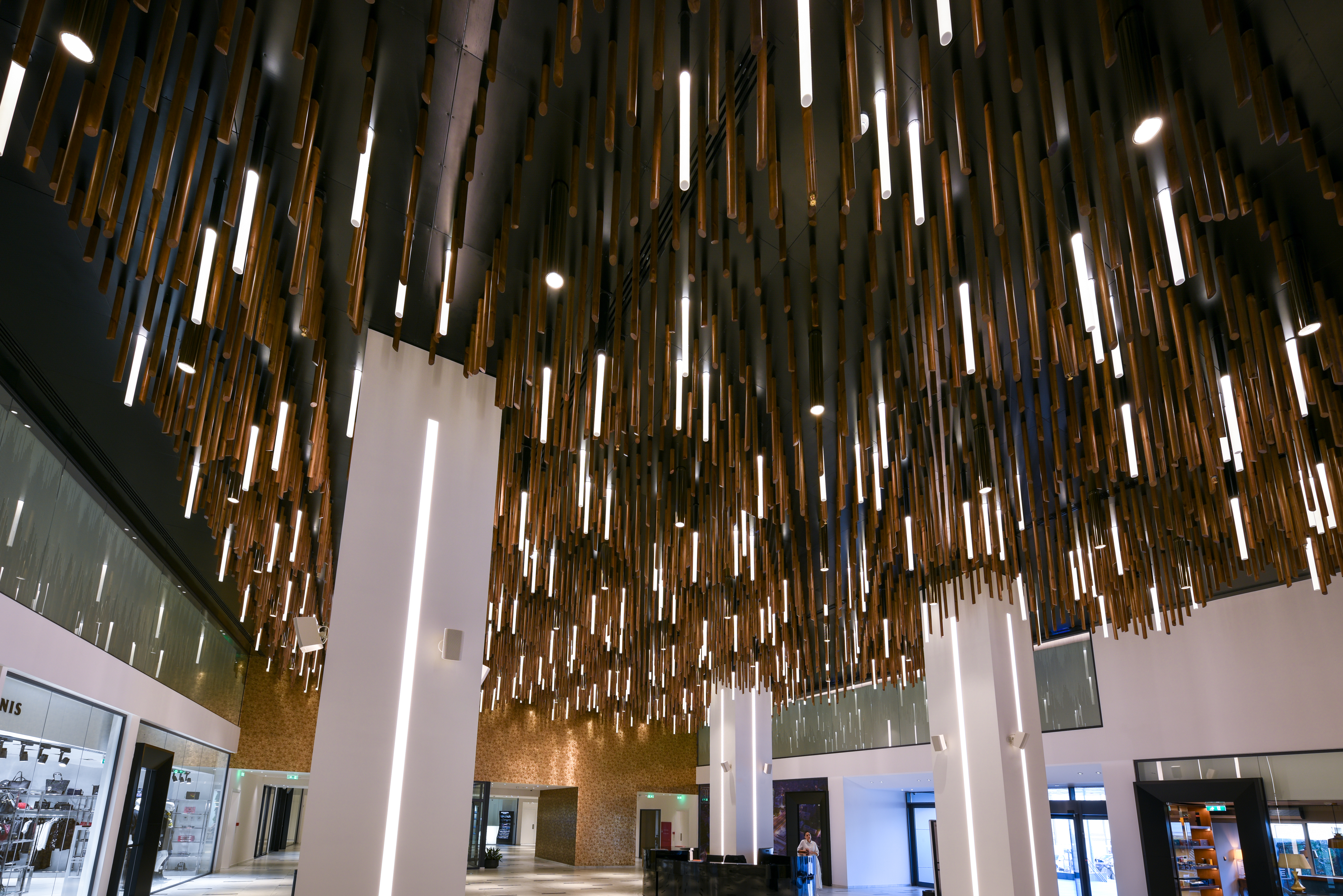 DRIVING AND CONTROLLING
THE LUMINAIRES

Now that the decision had been made to have dynamic dimming, some fundamental choices were required. illumination Physics already manufactures a range of LED driver options. Our choice would be influenced by practical considerations.
The space above the ceiling would be effectively inaccessible so the notion of placing drivers and data in the void was not an option that provided practical maintainability. We dismissed the idea of incorporating an individual driver for each pendant. It was far better to centralise the location of larger drivers capable of controlling many pendants in an easily accessible location away from the ceiling void.

This decision had a consequence because the ELV cables would be long and we would need to manage any losses. The LED engines required constant current supply so voltage drop was manageable with correctly dimensioned cables. The perfect solution presented itself – the 24V illumination Physics HP-LED Driver 12. Twelve groups of five luminaries could be controlled from one rack-mounted driver. These were to be installed in multiple locations to minimise the cabling. We make both a DMX and a DALI version of this unit and since DALI was being used elsewhere at the Radisson, we went with that protocol. 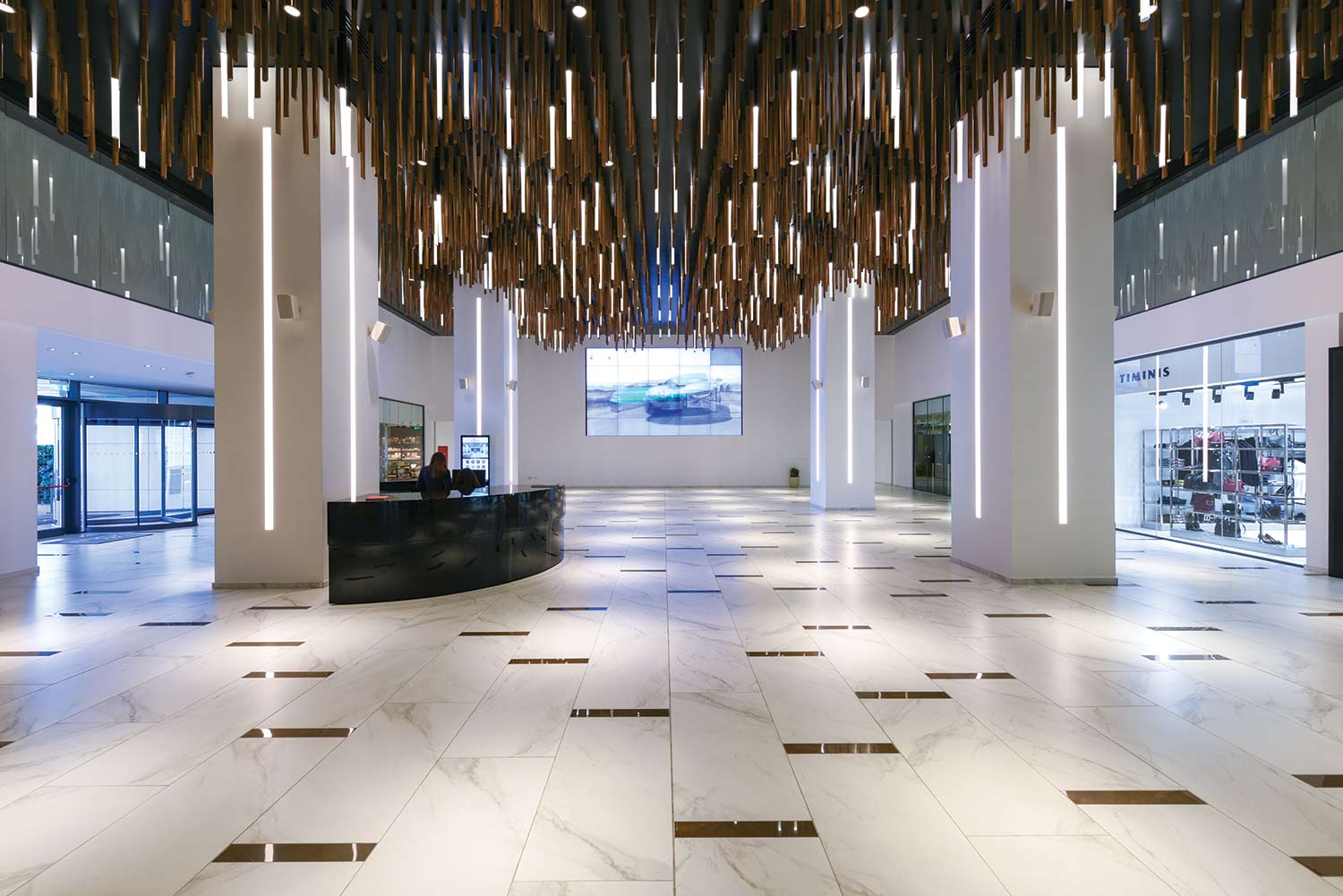 The lighting effect fulfils the promise of the initial design. Like a vast inverted forest, the timber and illuminated pendants both add great interest to a grand space, providing an aspirational design looking to the future. 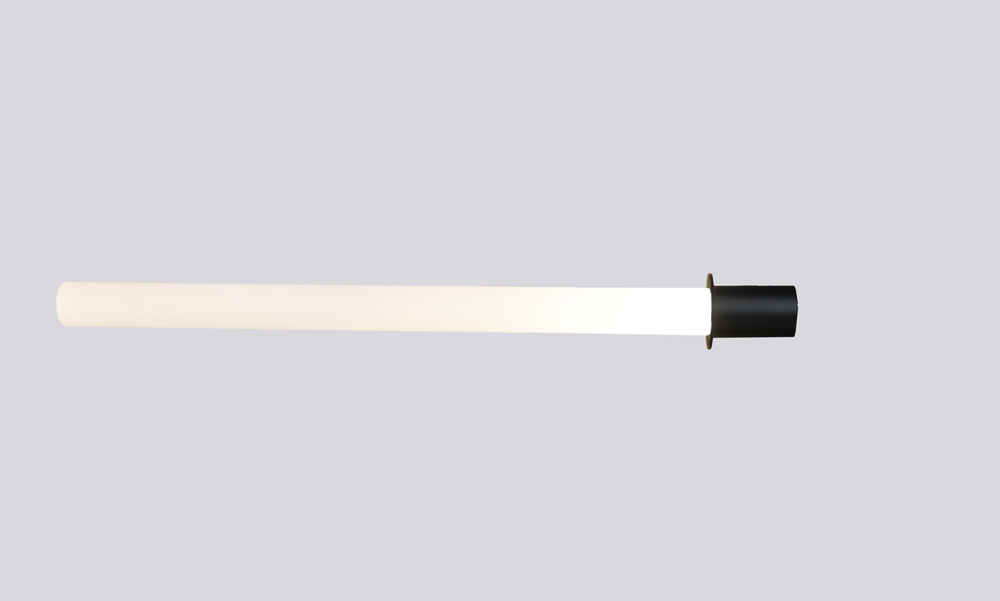 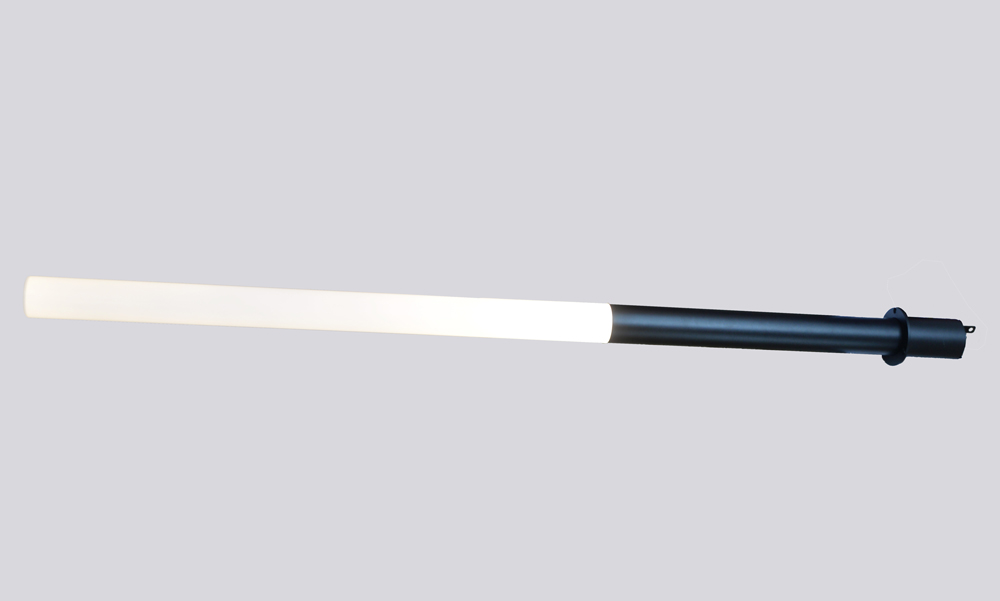